Curtis Blaydes Wants To Show He's On A Different Level

Curtis Blaydes has a real clear, straightforward approach not only to his fight this weekend with Tom Aspinall, but his career inside the UFC cage, in general: punch in, get in a fight, punch out, and then do it all over again the next time they call.

“I am a prizefighter; I’m in this for the money,” Blaydes said on Tuesday afternoon from London, where he faces off with Aspinall in the main event of the UFC’s second appearance at The O2 Arena this year. “The belt is the ultimate goal and would be nice, but I just want to be able to constantly provide for my family and open up opportunities in the future for my daughter that may not have been available otherwise.

“The belt would be nice, but as long as I’m earning decent income, that’s what matters.”

It’s sounds simple enough, but this weekend’s clash with Aspinall is a perfect representation of how the approach is actually more of an overall ethos regarding the fight game for the surging American heavyweight.

Following his win over Chris Daukaus in March, Blaydes used his time on the mic to lobby for an interim title fight with France’s Ciryl Gane, who entered the year with the interim title around his waist before falling to Francis Ngannou in a title unification bout at UFC 270 in January.

The way Blaydes saw it, they were the top two active fighters in the division, and a championship bout made sense, but it wasn’t meant to be. Gane was booked against ascending Australian Tai Tuivasa in the main event of the UFC’s inaugural event in his home country of France this fall, and Blaydes was tasked with crossing the Atlantic to square off with Aspinall in front of a partisan crowd in London.

Some may see being asked to venture into hostile territory as an additional challenge bolted onto the already formidable task of taking on the talented British heavyweight, who has gone 5-0 with five finishes to begin his UFC career, most recently tapping out Top 10 fixture Alexander Volkov in the first round.

But where the fight takes place and who the crowd is rooting for carry zero weight with Blaydes, who chooses to simply focus on the man standing across from him and nothing else.

“It’s just work,” said Blaydes when asked about facing Aspinall in England. “Where the Octagon is doesn’t have any impact on the outcome of the fight. We could have a fight on some random island off the coast of Australia and it doesn’t matter because it doesn’t affect the speed of my punches or of his punches.

“I get it — I know people put a lot of emphasis on him being from England and we’re in England, but I don’t put that much emphasis on it; it’s just a fight.

“And the crowd has zero impact on the outcome of the fights (either),” he added. “(If they did) we’d already know who was going to win almost every fight.”

Blaydes may not have the support of the sure-to-be partisan crowd in London this weekend — though his traditional walkout to the theme song from Mortal Kombat is a winner everywhere he goes — but he’ll stride to the Octagon riding a two-fight winning streak and brandishing a 16-3 record with one no contest verdict, with all but the first five of those victories coming under the UFC banner. 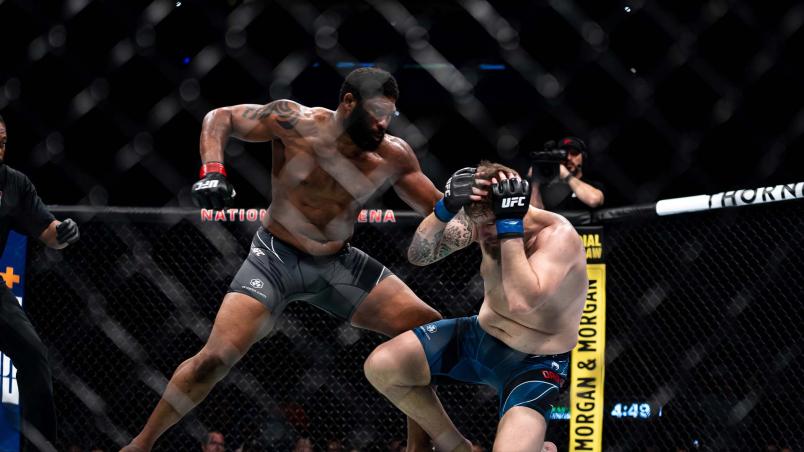 A fixture in the heavyweight Top 15 for a number of years now, the 31-year-old Elevation Fight Team representative has been a Top 5 staple for the last several years, with his only losses coming against current champ Francis Ngannou twice and perennial contender Derrick Lewis.

He’s become a divisional stalwart and a complete fighter after arriving on the big stage as a former NJCAA national champion wrestler still working to develop his striking skills and figure out how to make his considerable athleticism, size, and overall explosiveness work for him inside the cage.

“It’s very important,” he said of reaching this point in his career. “It means all the decisions I’ve made up to this point — it’s validation that I made the right decisions.”

The proof of those proper decisions was also on display in his bout against Daukaus in Columbus in March, where he stopped the former Philadelphia police officer just 17 seconds into the second round of their main event encounter.

While not the first fight of his career where Blaydes hasn’t used his wrestling — he’s had two other victories where he didn’t score a takedown, though he logged more than five minutes of control time in one of those contests — this was the most fluid and confident he’d looked on the feet.

He showed glimpses of that confidence in his loss to Lewis a year earlier, but against Daukaus, there wasn’t even the thought of shooting for a takedown; he simply stood in there with him, let his hands go, and left him slumped face down on the canvas just a few seconds into the sixth minute of their potential 25-minute engagement. 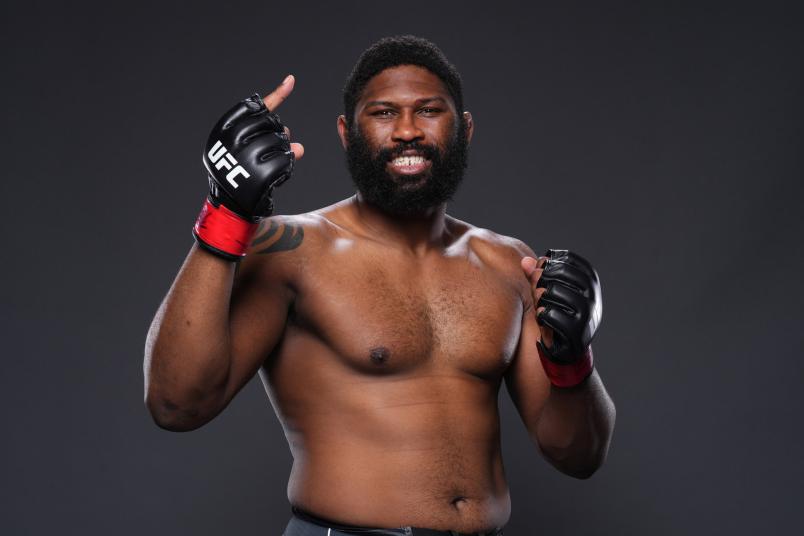 Curtis Blaydes poses for a portrait backstage during the UFC Fight Night event at Nationwide Arena on March 26, 2022 in Columbus, Ohio. (Photo by Mike Roach/Zuffa LLC)

“I think I had already showed I was well-rounded and complete, but if the public and the media finally see it now, that’s good,” said Blaydes, who heads into Saturday’s contest having won six of his last seven appearances while piling up 29 takedowns and three second-round stoppages.

The Chicagoland native sees Aspinall as an atypical heavyweight who presents a serious challenge, but just like in March, Blaydes is focused on showing the local favorite that there are levels within the heavyweight ranks.

“He throws combinations, which isn’t the norm for heavyweight,” he said of Aspinall, who has won eight consecutive fights overall, and has yet to see the end of the second round in his MMA career. “He’s fast, he’s smart, and he knows when to throw which strike. 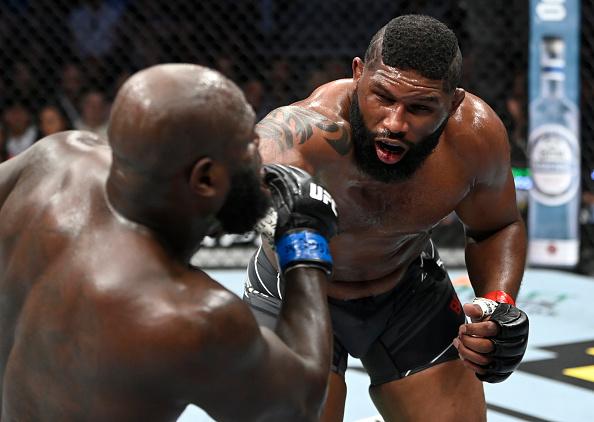 Curtis Blaydes punches Jairzinho Rozenstruik of Suriname in their heavyweight fight during the UFC 266 event on September 25, 2021 in Las Vegas, Nevada. (Photo by Jeff Bottari/Zuffa LLC)

“He has (a complete game) and I think he’s a very dangerous opponent,” he added. “(But my plan) is once again to show that there are levels in the heavyweight division, and I’m on a higher level.”

Should Blaydes emerge victorious this weekend, don’t expect him to make any call outs of lobby for one particular matchup because, as far as he’s concerned, what comes next is already pretty easy to figure out.

Everything That Is Happening In The UFC Heavyweight Division

“Everyone knows where I’m ranked, where Aspinall’s ranked, where Ciryl Gane is ranked, and where Tuivasa is right now, so it only seems natural that the winner of Aspinall and I would most likely fight the winner of Tuivasa and Gane,” he said. “There is already pretty much a natural future opponent, so I wouldn’t see much point in me calling out anyone else because that’s how I believe it’s going to play out.”

And even if that seemingly obvious next assignment doesn’t materialize, it doesn’t really matter, because whenever the next call does come, Blaydes will be there, ready to punch the clock and another dangerous opponent, just like always.