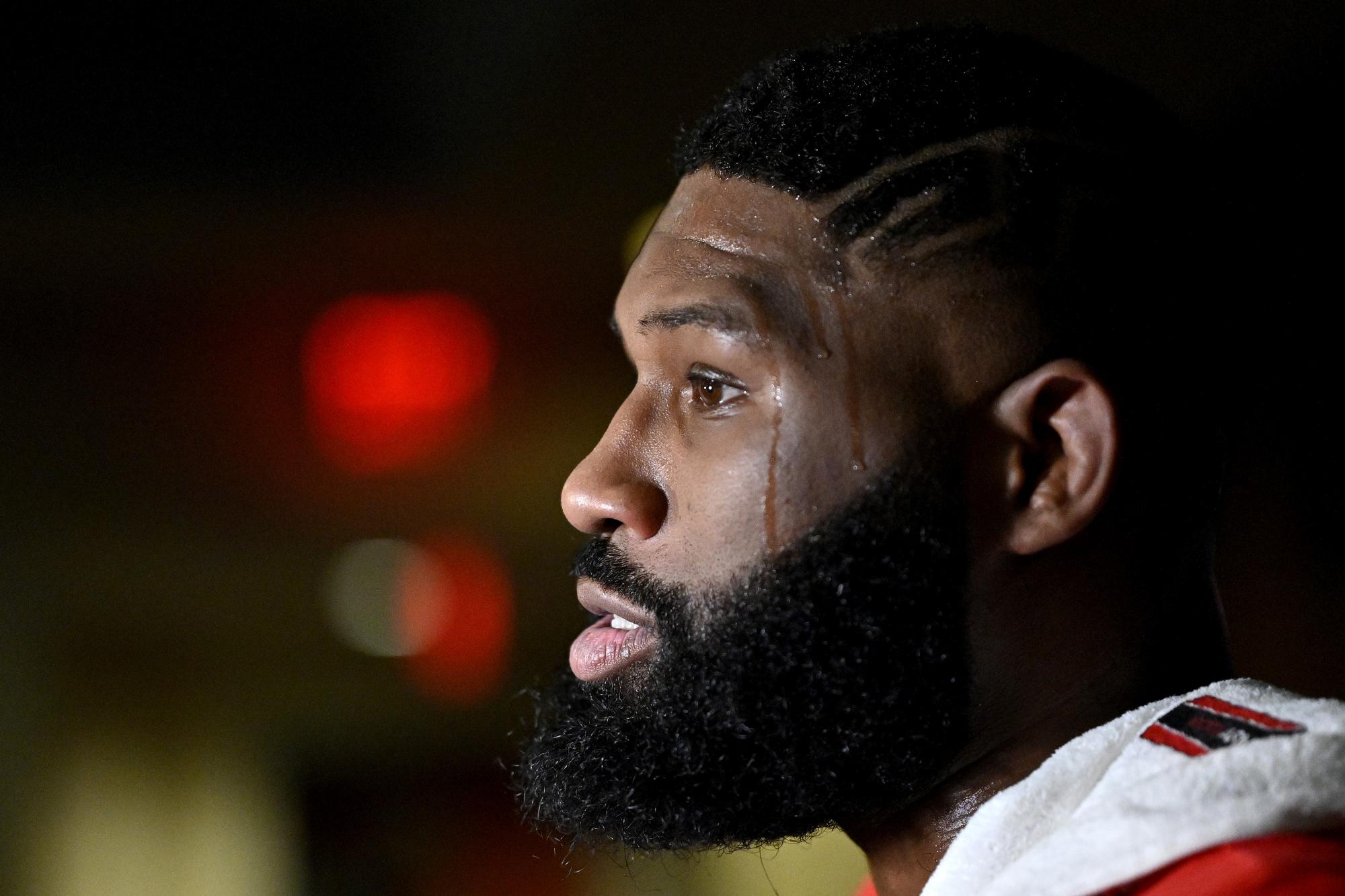 “I’ve always been in the spotlight when it comes to wrestling and individual sports where everyone’s looking at you.”
By Thomas Gerbasi, on Twitter: @TGerbasi • Jan. 24, 2020

As soon as Curtis Blaydes broke out singing Katy Perry’s “I Kissed a Girl” in an interview with theScoreMMA’s James Lynch, it was evident that the No. 3-ranked heavyweight contender is more than comfortable in the spotlight these days.

“I’ve always been in the spotlight when it comes to wrestling and individual sports where everyone’s looking at you,” said Blaydes, who is in the main event slot of this weekend’s UFC Fight Night show in Raleigh. “It’s the same thing here, just on a grander scale. I’ve always wanted to be that guy that’s always in the main event or co-main event because that means you’re one of the top guys in your division. So I’m happy.”

Blaydes is one of the top guys, winner of seven UFC bouts, with his only two losses coming at the hands of Francis Ngannou. That’s an impressive run for someone who basically grew up in the Octagon, having signed with the promotion in 2016 having just five bouts. Yet even back then, the 2012 NJCAA National wrestling champion showed he had the goods to make a run at the top of the division. Getting comfortable with everything else appeared to take a little longer, but now Blaydes has completely settled in. He’s even enjoying fighting it locales like Croatia, Australia, China and Abu Dhabi.

“I’m realizing that you have to embrace the whole experience,” he said. “Fight week, going to different places, meeting new people and giving my opinion on things like MMA. It’s all a part of the process, and the more you do it, the more practice you get, the better you are at doing it and the more comfortable you are and the more you can enjoy it. I think I’ve gotten to that point now where I feel comfortable enough to be able to enjoy it. I don’t view it as work.”

He even enjoys interviews these days, which isn’t something you hear often. And while he isn’t too enamored of the long plane flights outside of the States, the Chicago native is happy to be seeing the world once his feet hit the ground.

“I enjoy going to all these different places I would never have gone to without the UFC, like Australia and Beijing; I got to go to the Great Wall with my dad and my brother and I enjoy that stuff. If they had given me Junior in Brazil, I would have been down. That would have been cool, too.”

Fighting a Brazilian in Brazil is a tough gig, but given the personalities of both Blaydes and Dos Santos, dare I say that Blaydes might have even received some cheers if he fought the former heavyweight champion in South America. That’s a testament to a young man choosing to conduct himself in a way that represents the sport well while setting an example for his daughter, Harlie.

“I think that’s the way every professional athlete, especially in the fight game, should conduct themselves,” he said. “We’re getting paid to fight. So let’s bring it back to being real martial artists. And at the base of martial arts, you have to have respect for your opponent. You know the work he put in to get ready for you, and he knows the work you put in to get ready for him. As long as both guys make weight, the respect should go all the way into the cage, and afterward, it should remain respectful.”

With the exception of some bad blood with Justin Willis last year, that’s the way it’s been throughout Blaydes’ career, one that has included fights with some of the sport’s biggest names, including Alistair Overeem and Mark Hunt. It would be easy to get star struck, but Blaydes has found the balance between fighting and beating a faceless foe and then respecting that foe when the fight is over.

MORE FROM UFC RALEIGH: JDS Focused On The Belt | No Going Back For Chiesa | RDA Taking The Hard Route | Fight by Fight Preview | Fighters On The Rise | Hill Reaching Her Peak

“I’m just business before,” Blaydes said. “But afterwards, I’m very complimentary, very respectful because I’ve watched these guys. These are the OGs, these are the names. You beat these guys, you’re real. And I am always just happy to be able to meet these guys. Because after you fight them, they’re normal guys. They have the same issues, the same struggles that you have and they reaffirm that everything’s all right. Sometimes you get a bit overwhelmed, you’re like, ‘How am I doing, how am I going to do this, am I doing this right,’ and you talk to a guy like Alistair and he tells you the things he’s done right and the things he’s done wrong, and I know I’m on the right path. It’s good to hear it from those guys.”

Overeem liked Blaydes so much he wound up training with him in Colorado. You don’t see that too often. Yet despite all the respect going around, it does appear that “Razor” has been a little more intent on delivering one-sided victories on fight night, with the wins over Willis and Shamil Abdurakhimov among his most decisive.

“I’m a little more focused now, just having a daughter,” said Blaydes. “It’s a lot more about business. I need that money.”

He also wants that belt, and should he get there, he’s got the potential to stay on top for a long time. That’s the plan, and it always has been.

“As long as I’ve been an athlete, professional or amateur, I’ve always liked to be at the top,” Blaydes said. “I’ve always been one of the best and, for me, this is status quo, so as long as I’m an athlete, I want to be at or hovering around the top. As soon as I start drifting too far away, that’s when I know it’s time to hang ‘em up.”