Next month will mark seven years since Curtis Blaydes made his first trip into the Octagon.

Beginning with that first appearance in Zagreb, Croatia and extending through this weekend’s main event assignment opposite Chris Daukaus, the powerful wrestler has faced a steady stream of the top talent in the heavyweight division, amassing a 10-3 record with one no contest under the UFC banner and a 15-3 mark (plus that one no contest) overall.

Each time he’s suffered a setback, the 31-year-old Chicago product has immediately bounced back, consistently putting multiple victories between his occasional stumbles.

“It’s very important just because you don’t want to have a losing streak,” Blaydes said of being able to get right back into the win column, as he did in September with a unanimous decision victory over Jairzinho Rozenstruik. “I haven’t had a losing streak in my entire athletic career.

“For wrestling, football, MMA — I’ve never had a losing streak. It’s something I’ve always wanted to avoid, and I’ve been blessed to be able to do that.”

To have faced the level of competition he’s faced and enjoyed the overall success he’s enjoyed, Blaydes’ ability to shake off those rare defeats is a testament to his mindset and approach, both of which are built on acceptance, understanding, and an ability to learn from his mistakes. 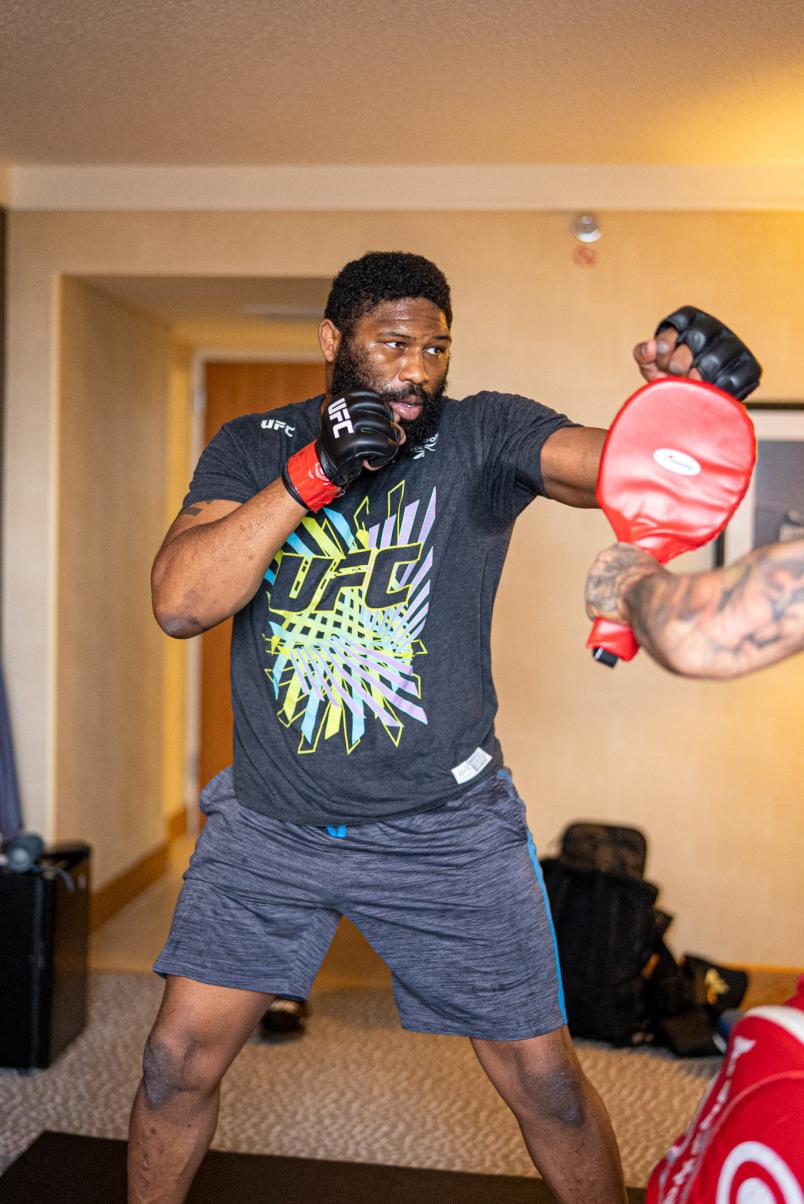 “It’s heavyweight!” he said in his deep baritone when asked how he’s able to just move on to the next one after a frustrating knockout loss like the one he suffered last February against Derrick Lewis. “Unless someone beats my *** for five whole rounds or three whole rounds — anybody can get caught.

“People like to tiptoe around that Francis (Ngannou) fight or that Derrick Lewis fight, but I don’t feel no shame. It’s heavyweight; anybody can knock anybody out with one punch; that’s what makes it easy to bounce back. I don’t feel like it was skill; maybe it was supposed to happen. Maybe that was the path I was supposed to take and I’ve got to hit a bump in the road in order to grow.

His two fights last year are a good representation of what he’s talking about and proof that Blaydes isn’t just saying all the right things ahead of Saturday’s fight with Daukaus.

Through the first five minutes of his bout with Lewis, the Elevation Fight Team member was clearly getting the better of things, boxing up “The Black Beast” and looking, initially, on his way to a fifth straight victory.

But early in the second, he got a little complacent and a made a mistake, telegraphing a takedown attempt from too far out. Lewis uncorked an uppercut as Blaydes dropped his head and charged forward and the blow stopped him dead in his tracks.

“Angles — you gotta take better angles before you shoot,” said Blaydes. “You can’t just be standing in front of a power puncher and have a race to see who gets there first.”

He lost that race, but responded in trademark fashion, returning seven months later to post a lopsided decision win over Rozenstruik, instantly re-affirming his standing as a Top 5 talent in the heavyweight ranks and very much someone that has to be included in any conversations about how to line things up at the top of the division.

At times, Blaydes has been the odd man out when talk of big matchups with big names surface — in part because he’s already shared the cage with the reigning champ, Francis Ngannou, on two occasions, losing both times, but also because he’s not someone that is perpetually pleading his case for big assignments and a championship opportunity in the media.

“I have other people getting angry on my behalf,” he said with a laugh regarding his occasional exclusion from conversations about how to book the heavyweight division going forward. “I think that’s what screws up a lot of guys: they get too caught up in social media and hyping themselves up, arguing their opinions or other people’s opinions when all that does is add more pressure.

“I don’t get angry because it’s just a job,” he added. “I don’t care about opinions; they are what they are and there is nothing I can do about it. What I can do is go out there, perform at my best, and let the product speak for itself.” 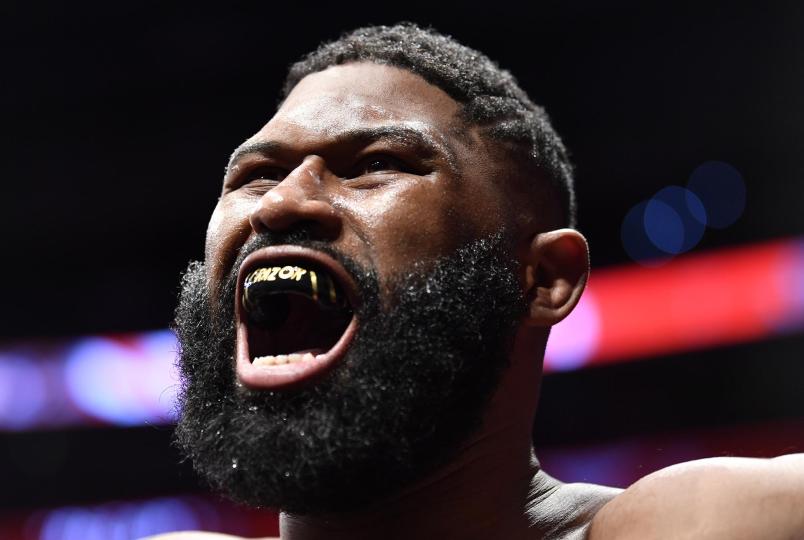 That’s the mindset he carries with him into this weekend’s bout with Daukaus, who enters off his own stoppage loss to Lewis, and the approach he’s worked from since his days as a standout wrestler in college.

“I don’t change up my mindset or my goals or anything from fight-to-fight,” he added. “The same mindset I had against Mark Hunt, Alistair (Overeem), Junior Dos Santos, Francis Ngannou — both times — and Jairzinho; it’s always the same mindset.

“If you change up your mindset, that means you’re being emotional and you’re allowing an opponent to dictate how you feel.”

A lot of people talk about only focusing on the things they can control, only to turn around and fixate on myriad things that are out of their grasp, but Blaydes has shown time and again that he’s a man of his word in that regard.

The last fight, the last loss, or the online chatter — he can’t do anything about any of it now, so he’s not going to waste any energy on any of it. 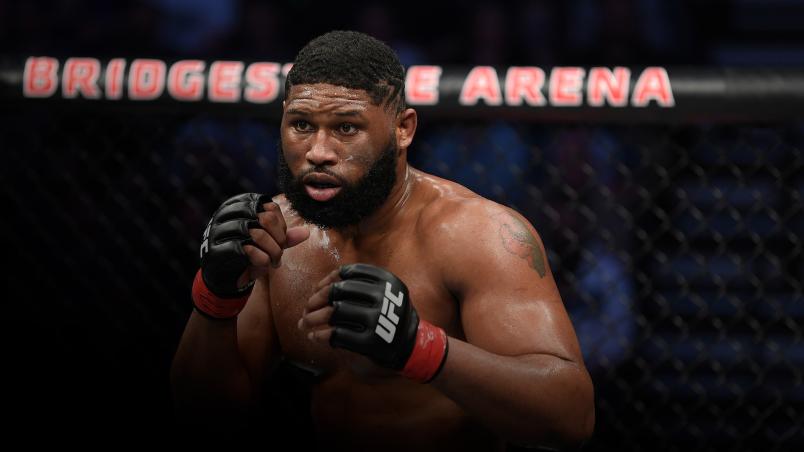 What he will do, however, is focus on the task at hand, on Chris Daukaus, but even then, the talented heavyweight still does his best to keep things as simple as possible.

“He’s a heavyweight, so as I said earlier, every heavyweight is dangerous; one punch could be the fight,” Blaydes said of his opponent this weekend. “I’ve heard about his jiu jitsu, so those are two things we’re hyper-aware of, but besides that, it’s just a fight.

“When you’re going against top-ranked guys, you never know what is going to happen — is it going to be chaos? — so I just focus on my effort and output,” he added. “It doesn’t always work out — it didn’t work out in Beijing and it didn’t work out last February — but it usually works out.”