Curran is Saving Her Fight for the Octagon 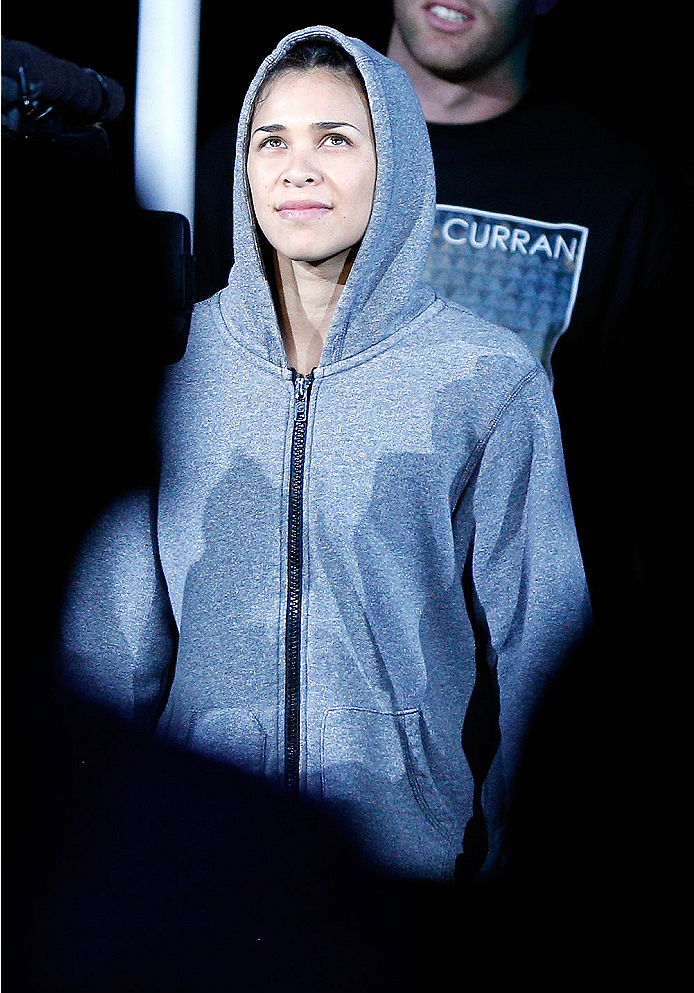 If Kailin Curran had the first-time UFC jitters we all hear about in her Octagon debut against Paige VanZant last November, she had a funny way of showing them, as she and Miss VanZant both earned Fight of the Night honors for their efforts.

Sure, Curran lost the bout, getting stopped in the third round, but no one said after the fight that they didn’t want to see the Hawaiian back in the Octagon. Bottom line, she made an impression, a good one, but that’s not what she wanted to hear in the days after her first professional loss.

“At first, I took it hard,” she said. “It was my first loss and I couldn’t believe it. I was in shock, especially because I didn’t think I would lose to her the way I did. We had a back and forth fight and I wish that I could have gone all the way. I’d rather have lost by decision than by a stoppage. That was pretty disappointing, but we did get the Fight of the Night bonus and that did kind of put in perspective that I did fight my heart out.”

Yet as she returned home to Ewa Beach for a little R&R, that night in Austin, Texas stuck around in her head for a while.

“After that fight I got to go home and let myself relax and think about the fight, and I just couldn’t get over it,” Curran recalls. “I would just watch the fight over and over and see where I went wrong and what happened.”

It’s not a great thing for any athlete to go through, but when you hear about that reaction from a fighter, it’s what you want them to say. If losses are chalked up to just a bad night at the office, you wonder where the passion is to want to succeed and one day challenge for and win a championship. The 24-year-old Curran, still young in her career at 3-1, has that desire, and while she stayed in a funk for a bit, it began disappearing once she got back to work in Southern California.

“You can’t feel sorry for yourself because if you start doing that, that kind of attitude doesn’t get you anywhere,” she said. “I was still moping around (Laughs), but I got back into it and realized that it happens in this sport all the time. As I long as gave it everything, and I knew I did, I was okay.”

And about those jitters, she says, “The first time I didn’t let myself feel like I wanted to feel. When I walked out, I teared up, but then I pulled it back and was like ‘don’t cry.’ (Laughs) I was thinking too much, and now it’s all about going out there and having fun. I know it’s a possibility that I can lose, but why am I gonna let that weigh me down? I do this because I love it, so that’s all I’m bringing into the next fight – having fun.”

Admitting to “an adrenalin dump” during the VanZant fight that left her gas tank empty after the second round, Curran believes she has everything under control as she heads Down Under to face Alex Chambers in Adelaide, Australia this Saturday night (Sunday morning Aussie time). Curran also wouldn’t mind another Fight of the Night bonus against the TUF 20 competitor, even if it is in Chambers’ backyard.

The fans would be pretty happy to see the strawweight ladies steal the show once more, and as Curran points out, the VanZant fight was just a sample of what she can do on fight night.

“That’s how I fight all the time,” she said. “I’m an exciting fighter. And hopefully this is more of a stand-up fight. In that first fight (against VanZant), she put me up against the cage and just hugged me a lot of the time, so I hope that Alex engages when standing and wants to trade punches. That would be awesome.”

It’s a weird dichotomy, wanting to trade punches for 15 minutes or less and still being happy and excited about it, and even being willing to shake hands with your opponent before and after. But that’s mixed martial arts, and that’s Kailin Curran, who says that’s she never going to be one to engage in a fight before the fight.

“My whole personality, and during the whole time I’ve been fighting, I’ve been humble and never tried to disrespect anybody before I step into the cage with them,” she said. “It’s normal for me to smile and respect that person because they stepped up too and they’re gonna fight as well. So I’ll always be humble. I don’t think I would ever have that big mouth and start a fight before a fight unless someone went to extremes. Even then, it would take a lot for me for go at someone before the fight actually happens. (Laughs) I’m a pretty easygoing person.”

At least until the bell rings, and this time, she promises that it won’t be like Austin.