“It’s definitely full circle, and to get to fight in San Jose in a UFC event is really awesome.” - Cung Le 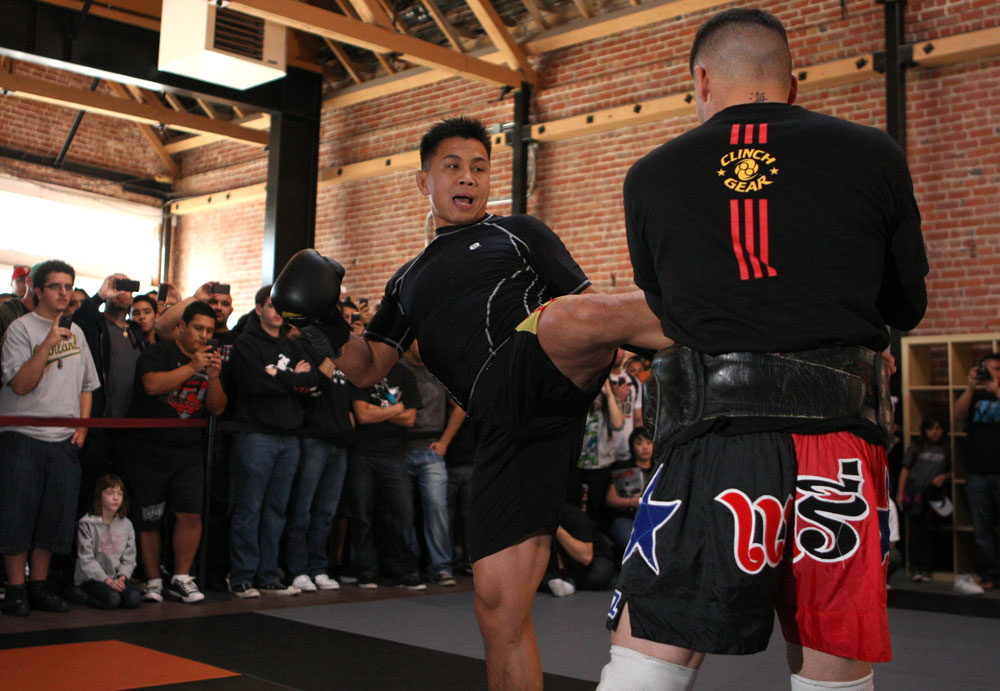 If you’ve never seen Cung Le fight before, just think of a Hollywood action movie, but in real life. But that’s just the surface stuff. Beyond the highlight reel knockouts, jaw-dropping strikes, and flashy scissor kicks, there lies a fighter, one you would have seen if you were around when he entered his first Sanshou tournament, the US Open, in 1994.

In that tournament, Le broke his hand because he admittedly didn’t wrap his hands properly, and then later on he broke his foot. But he kept going, eventually taking first place in the tourney. That’s not flash. That’s heart.

“It just depends on the person,” he said humbly, recalling the true start of his martial arts career. “For me, even though I had a broken hand and broken foot, I don’t want to give up. Sometimes you dig deep, and the next day you realize what kind of person you are.”

Fast forward to 2009. Le, a legitimate superstar in the worlds of Sanshou and kickboxing, where he compiled a perfect 17-0 pro record, is matching that success in mixed martial arts, where he is 6-0 with six knockouts and the former Strikeforce middleweight champion, “former” only because he vacated the title to do some film work. He returned in December of 2009, but suffered his first loss via knockout to the aptly-nicknamed “Hands of Steel,” Scott Smith. As a 37-year old husband and father whose legacy in combat sports was already secured, it could have been the time for Le to say “enough.”

“It definitely hurt a lot after I lost to Scott Smith,” said Le. “The next morning was really tough, but I have a great support system. My wife and my family got me through it, I learned a lot from it, and I wasn’t make the same mistakes I did that time.”

In June of 2010, Le faced off against Smith a second time, and at 1:46 of the second round, he evened the score, knocking his rival out.

Now he will make his UFC debut, and his opponent on Saturday is no pushover. In fact, facing off against Wanderlei Silva is precisely the way Le wants to make his entrance into the Octagon in front of his hometown fans in San Jose.

“It’s definitely full circle, and to get to fight in San Jose in a UFC event is really awesome,” said Le, now 39. “I watched Wanderlei fight a lot over the years and he’s definitely a legend. I’m excited to fight him.”

And fans should be excited to see this fight, simply because it will match the ultra-aggressive attacks of Silva, who isn’t nicknamed “The Axe Murderer” accidentally, against the precision flash of Le in what promises to be a standup scrap for as long as it lasts. Or will it?

“I don’t know if he (Silva) is gonna shoot in or not,” smiles Le. “Wanderlei has a good camp and they might be preparing to change things up, so I’m prepared for everything.”

And we assume you have a few tricks as well, Mr. Le?

“I got a lot of surprises up my sleeve.”

One of those surprises came in 2005, when he finally decided to dip his toe in the MMA pool. When I first spoke to him a couple years earlier, the pressure was already mounting for him to take a stab at MMA, and as he told me in 2003, “The reason why I haven’t stepped into the mixed martial arts arena is that I feel that I’m not complete as far as ground fighting goes,” said Le.  “I did work a little bit with Ralph and Cesar Gracie but there’s so much to learn, and if I’m going to step into another arena, I want to be prepared.  At this point, with two gyms and a son, I didn’t have any time to train properly enough.  I feel my standup is okay to go up against these guys, but you can get on the ground, be beating these dudes up, and you end up in some kind of lock and it could be all over.”

By 2005 though, the American Kickboxing Academy’s Javier Mendez talked to him and told him that now was the time to strike.

“Javier Mendez talked me into doing it in 2005, and that’s when he became my trainer,” said Le. “Before that, we were just friends and he told me that I should be trying out MMA because it was about to blow up with the TUF show. Javier broke it down and said that I can grow from it, and sometimes you have to take chances. I took the chance and I’m very grateful that I listened to Javier and that I have a great team around me.”

Le debuted in 2006 with a first round knockout of Mike Altman, and he’s gone on to win six more bouts along the way (all in San Jose), with the only blemish being the loss to Smith. He has plenty of high-profile victims on that record, including Frank Shamrock, Smith, Tony Fryklund, and Sam Morgan, and while he’s knocked out his opponent in each of his victories and is rightfully considered a striker, it is important to point out that Le was a high school wrestling All-American and a California state junior college champion on the mat. He admits that “learning the Brazilian Jiu-Jitsu part and getting into the right position when you do a takedown so you don’t put yourself in trouble with submissions and bad position,” was his biggest MMA hurdle, but now he’s confident that anything thrown at him in the Octagon will be something he can handle and counter, including Wanderlei Silva, who is the only thing on his mind right now.

“It’s just one day at a time and one fight at a time and Wanderlei is a very tough opponent and I’m very excited to fight him, so I’m not looking past him at all,” said Le. “Right now the crosshairs are on Wanderlei.”