"Fans can expect lightning followed by thunder. The storm is coming to China from Cung Le." - Cung Le 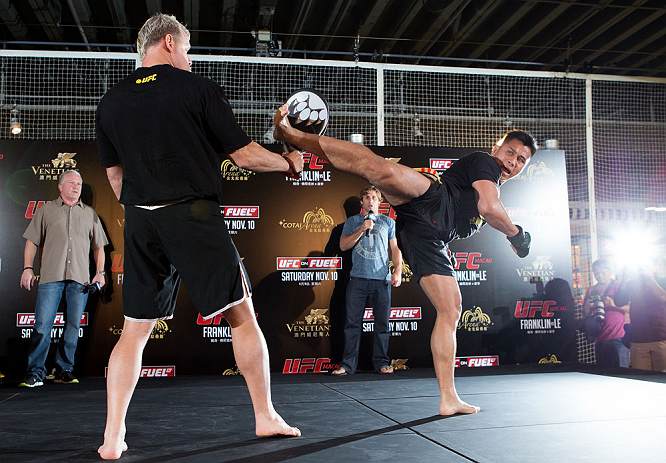 When a fighter reaches a certain age, questions about the end of their career become commonplace. They increase in frequency when a trip into the cage results in a loss, and become even more prominent when the fighter on the receiving end of the inquisition has a burgeoning secondary career standing by.

In May, six months after losing to Wanderlei Silva in his UFC debut, the life-long martial artist turned 40. It was his first fight in nearly 18 months, and just his third since defeating Frank Shamrock in March 2008 to push his record to a perfect 6-0 and claim the Strikeforce middleweight title.

Another muse had captured Le’s attention – acting. The Vietnamese-American hung up his four-ounce gloves and pursued his career as an actor, starring alongside Channing Tatum in Dito Montiel’s Fighting, and sharing the screen with Dennis Quaid and Ben Foster in Pandorum.

“I call it my one-two punch,” Le jokes of his joint pursuits in the cage and on the screen. “I always have passion to compete and train in the martial arts. Being part of the UFC has always been a dream of mine, but doing the movies, I also get to do what I love – the martial arts – and express myself through acting, through different characters, and to choreograph different fight scenes, and to work with different talented actors, directors, and producers. I can’t fight forever.”

This month, his one-two punch will put Le’s skills front and center in both arenas. On the screen, Le stars alongside Academy Award winner Russell Crowe and Lucy Liu as “Bronze Lion” in The Man with the Iron Fists, the highly anticipated directorial debut of Wu-Tang Clan frontman The RZA. Eight days after the film hit theaters, Le steps into the cage opposite former middleweight champion Rich Franklin as the headlining act for UFC: Macao, the organization’s debut event in China.

“I take it one fight at a time. A lot of people thought after the Wanderlei (fight) that they weren’t going to see me anymore; they thought I was going to retire because I had fought in the UFC,” suggests Le. “Then Rich Franklin came up for UFC 148, but the opponent was changed, and after I won that fight, everyone thought, `Oh, he’s going to retire.’ And I’m the main event now for the first UFC in China. It’s just one fight at a time, and I just enjoy every moment that I get to experience. Life is good.”

While a director can call “cut” to correct mistakes on the spot, mixed martial arts is much less forgiving. If a fighter is unprepared heading into the cage or unable to execute the way they should once the door is closed, they’re usually in for a long night.

Strategic adjustments do happen during the fight, but corrections and improvements more frequently come after the contest is over, as the fighter aims to build off the things they did right, and avoid repeating the things they did wrong. It a blueprint followed by every fighter, and the one Le adhered to between his first and second appearance in the Octagon.

“I was very excited to be part of the UFC, and then to fight someone like Wanderlei, who I had watched throughout the years in Pride. To see his career and now to get to face him,” Le begins, trailing off without finishing his sentence, his silence adequately conveying his reverence for his UFC 139 opponent. “I did all my training over at AKA, and it didn’t go as planned. I learned the hard way, and I didn’t make the same mistakes.

“The second time around, I brought in my buddy Scott Sheeley. I had him manage my camp. He actually lived at my house, so I had a trainer there 24/7, and it’s like a one-stop shop. He would make sure I get my wrestling in, my strength and conditioning, and my pad work. It was – everything was set and done for me. It wasn’t like, `Hey, do you have time to hold pads for me today?’ Because Javier Mendez is so busy, I didn’t get the work that I needed (heading into my first fight), and I didn’t get the guidance that I needed because Cain (Velasquez) was fighting the week before.

“I didn’t prepare properly, and it showed,” admits Le, who ended up being stopped by Silva in the second round. “I didn’t do myself justice in that first fight. Even though a lot of people enjoyed that fight and we got Fight of the Night, I definitely wanted to make up for it with my second fight. Now I have an opportunity to fight as the main event, and to express myself through fighting again.”

Saturday, Le looks to make it two-in-a-row with a victory over Franklin, a fellow “elder statesman” of the middleweight division who is looking to make one final run at championship gold.

“Ace” returned from 16 months on the sidelines in June to earn his second career win over the aforementioned Silva at UFC 147. For Le, the dual opportunity to square off with a decorated veteran like Franklin and headline the first UFC event in China is an honor, and he plans on making it a memorable night for the fans in attendance and those watching at home.

“Rich is a legend – former UFC champion, has a lot of great wins, and has been in the cage with a lot of great, great fighters. He’s been in the cage twice with Anderson (Silva), who is pound-for-pound the best, so he’s the real deal, top-level opponent. I’m excited to compete against him. It’s all about competition, and I’m just going to do my best to get that big W.

“It being in Asia, in China, I feel like that’s where martial arts came from before it spread, and to fight there as the main event is amazing for me as an athlete, as a martial artist, and as a UFC fighter. I’m honored, I’m thrilled, and I’m going to be ready to go come November 10; ready to give it all I’ve got and fight my heart out.”

For Cung Le, actor, once production wraps the final result is out of his control; how the film is put together and plays out on the screen is out of his hands. But when he steps inside the cage, Cung Le, mixed martial arts fighter, has a major say in what transpires.

This weekend in China, the star of screen and cage steps into the second of those two arenas, and he plans on making the main event of UFC: Macao a must-see blockbuster.

“Fans can expect lightning followed by thunder. The storm is coming to China from Cung Le.”