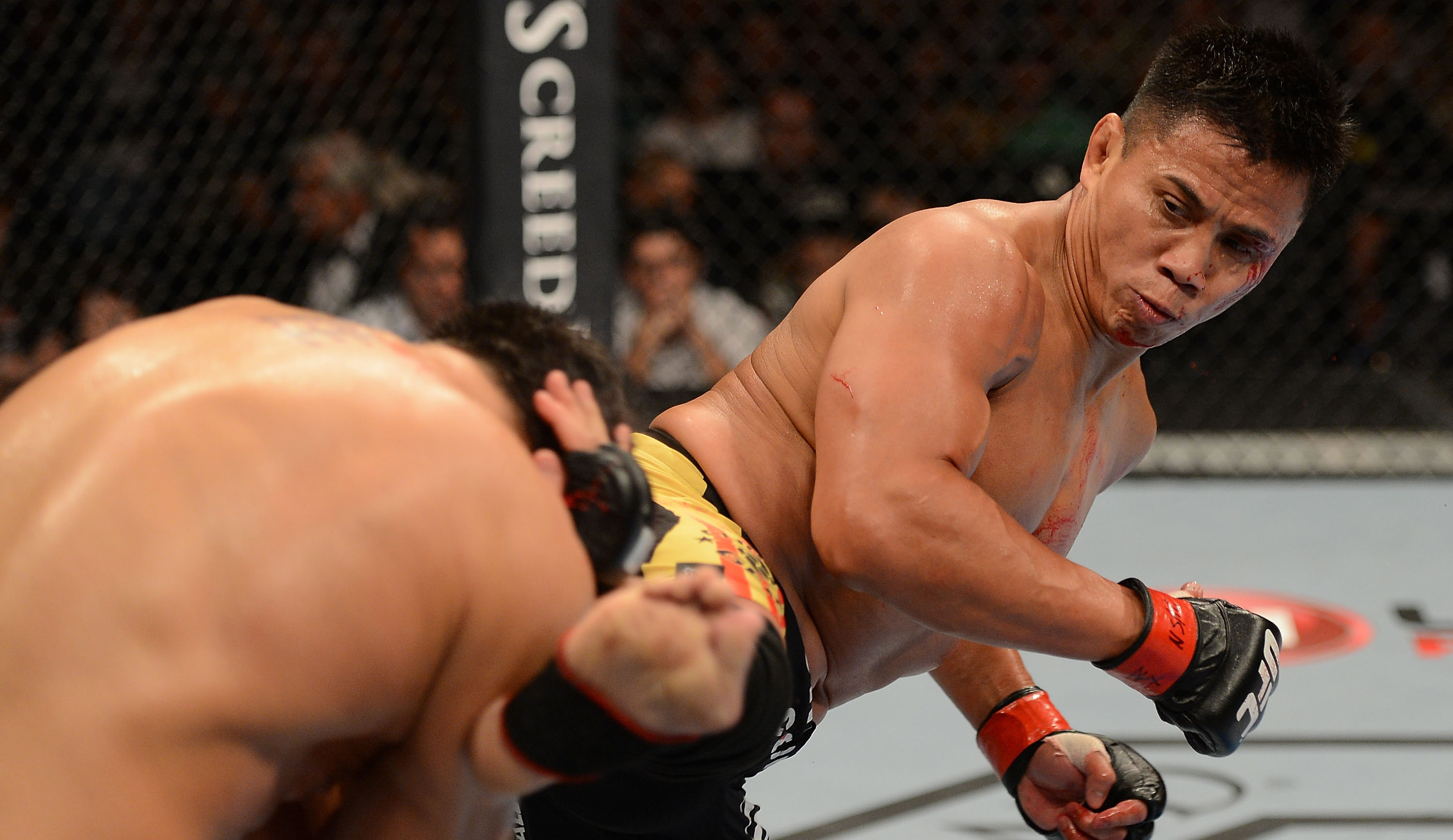 Cung Le remembers how things used to be before the UFC made inroads into Asia in recent years through shows in Macao, Singapore, and Japan. Even as recently as 2012, media and fans were more interested in the Vietnam native’s film career than what he did in the Octagon.

“Before I fought Rich (Franklin), we went on the press tour, and our first stop was Hong Kong,” Le recalled. “Ninety percent of the questions were ‘how was it to do this amazing fight scene with Donnie Yen.’ (Laughs) I had to push everyone to talk about the fight with me and Rich instead of talking about the movies I’m doing in Asia. I was popular in Asia more from what I did in that movie (Bodyguards and Assassins) with Donnie Yen, but then when people put one and one together, they’re like ‘hey, you’re fighting too?’”
> Watch: Cung Le vs. Rich Franklin for free!
He was, and in the first UFC event to be held in China in November of 2012, it was Le closing the show with a devastating first round knockout of Franklin, the former UFC middleweight champion. The event, and Le’s finish, helped introduce the UFC to an entirely new market, and the promotion has continued to go back there and have great success. The only thing missing has been Le, who hit the disabled list as soon as the Franklin bout was over.

“I had three elbow surgeries in four months around the Rich Franklin fight,” Le reveals. “Six weeks before the fight I had one, and then afterwards I had two. I should have taken care of 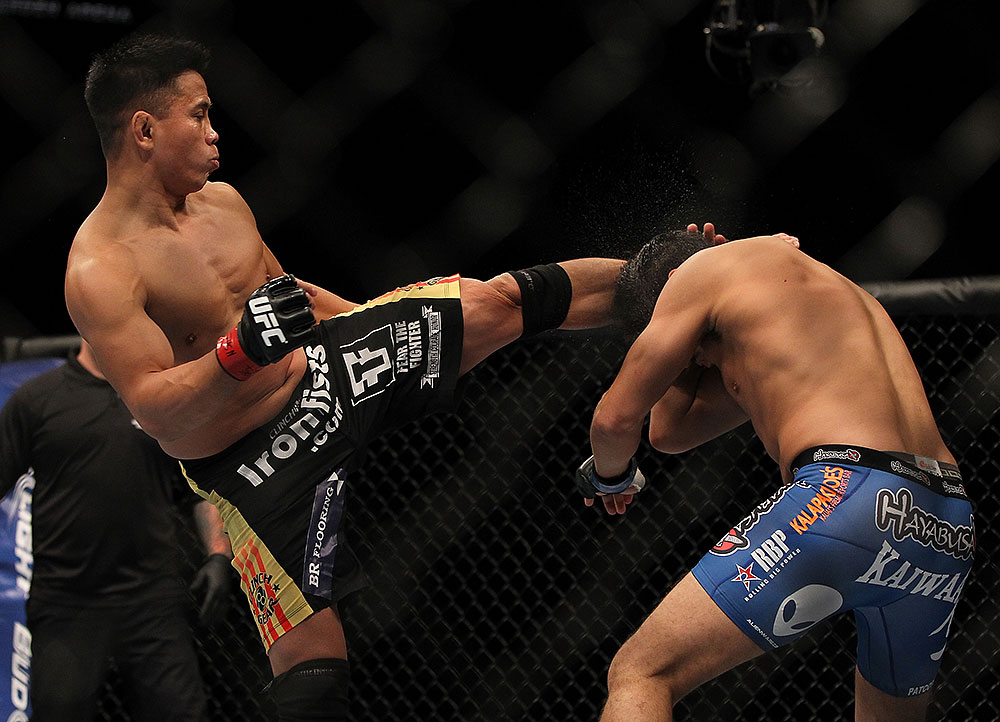 the elbows earlier, but I waited and had to learn the hard way.”

At 42, a lot of things are harder to do than they used to be, and Le doesn’t dismiss his age as he heads back to Macao for a Saturday main event against Michael Bisping. Then again, he doesn’t see it as a major factor in how he will perform this weekend.

“I enjoy competing and if I can compete for several more years, I would do it,” Le said. “Eventually, I don’t want to look back and say ‘I could have done this or I could have done that.’ I’ve always taken great care of myself, and my wife and close friends always say I’m a genetic freak. It was a little bit harder for me when I hit 40 because I was like ‘hey, genetic freak or not, these love handles are harder to get rid of.’ (Laughs) But now that I’m on the best diet and one that I’ve stayed consistent with for the longest time, I feel great, my elbows are healthy, and I’m able to do the things that I was able to do when I wasn’t injured. It’s been a while, I live and learn, but I’m ready to go and I’m ready to test myself.”
> Watch: On The Fly with Cung Le
If love handles are all Le has to worry about physically at 42, then he’s ahead of the game. Add in a solid training camp and some extra time in China to get acclimated, and everything is set for a typical Le performance, and for him, that means fireworks from horn to horn, with his hand usually raised at the end.

Entering his fourth UFC bout, the former Strikeforce middleweight champion from San Jose has picked up a Knockout of the Night award for his win over Franklin, a Fight of the Night bonus in his debut loss to Wanderlei Silva, and a three-round decision win over Patrick Cote. Now it’s Bisping, and what Le expects will be another tough battle.

“I’m excited to fight Michael Bisping,” he said. “He didn’t get there by luck or by chance. He got there by hard work, by winning fights, and making a name for himself. I’m excited to match my skills against his skills.”

What Le won’t try to match is Bisping’s penchant for trash talk. In fact, with Le being one of the nicer folks in the sport, “The Count” has had to really dig deep for material leading into the fight. 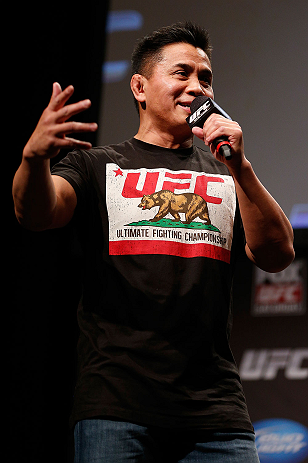 “I heard he talked about my movie career, I heard he talked about my buddy (actor) Channing Tatum, and he can talk all he wants, but my movie career is doing fine,” Le said. “I choose not to take certain roles. I’m at a point in my career where I pick and choose what I want to do and I’m actually producing my own projects because I’d rather star in the movies than being some triad villain that’s killing people and gets killed at the end because everyone wants to see me die.

“He (Bisping) can talk all he wants. He says I’m a one-trick pony and that all I’ve got are my kicks. Well, he should have watched my last fight, where I finished Rich with my hands. Or even look at my fights in the Sanda division where I could punch, kick and throw. So we’ll see what happens. I’m planning to bring all my tricks.”
> Read: Bisping and Le start the trash talk
If he does, a fight that doesn’t need any trash talk to sell it will produce the fireworks most are expecting. Couple that with a win, and the Cung Le Story may just be heading toward a true Hollywood ending.

“I take one fight at a time but I always want that amazing movie ending,” Le said. “Some movies you go watch and you’re like ‘what the hell just happened?’ That was the Wanderlei fight for me. (Laughs) But I’ve trained, I put in my hard work, and I’m ready to go. Whatever happens, I can look back and say I did everything I could do to come out victorious. In this sport, which I believe is the toughest sport out there and the most demanding, anything can happen. I’m confident, but I’m not cocky in thinking that I can just dominate. Michael Bisping is very tough, he’s going to come to fight, and he’s in good shape, but he’s never fought Cung Le.”