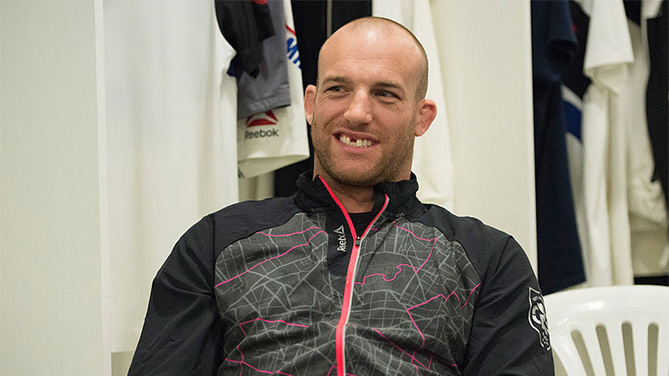 Patrick Cummins’ 8-3 record doesn’t quite represent the kind of talent and experience he actually possesses, and he’s counting on showing the things he’s learned in past fights as he goes into his UFC 198 bout against Antonio Rogerio Nogueira this Saturday.

“I’ve had eleven fights and I’ve gained a lot of experience,” the former Penn State wrestler said. “I’ve fought some of the best guys in the division and it’s silly to think I didn’t pick up anything positive from all of those fights.”

Training out of Kings MMA in Huntington Beach, California under master Rafael Cordeiro and alongside some of the most dangerous UFC champions, Cummins believes he’s more prepared for this fight than any other of his career.

“I’m poised to become the type of fighter I want to become in the next few years,” he said. “We have a great room. Guys like Fabricio Werdum and Rafael dos Anjos have little insights that are always helpful because Brazilians have stylistic differences. Cordeiro is a striker and his opinion is a little different than my striking coach and we’ve developed a good hybrid. I have found a way to take a little piece from everybody.”

And taking pieces here and there from the heavyweight champion of the world doesn’t hurt.

Not a FIGHT PASS member? Start your free trial now and watch Cummins vs Nogueira Saturday!

Training with Werdum, who headlines the same UFC 198 card, has made this bout against Nogueira even more exciting, and he’s champing at the bit to get in and show the world why the UFC was excited about him in the first place.

“It gives me reassurance that I’m doing the right things to prepare,” he said. “I’m right there training with the best guy in the world at the weight class above me and we’re battling it out, so I can pull a lot of confidence from there. Werdum is a big part of why this camp is so good. We have champions in a few different weight classes and that’s a motivational factor for not just me, but for every guy in the camp.”

Cummins has had a lot of success in the light heavyweight division. However, he knows that a loss against Glover Teixeira last November was a setback he was hoping to avoid.

“Nogueira is a big name and a win over him puts my name back in the hat,” the 35-year-old says. “When you come off a loss, people forget about you. I really want to get back into the win column because it puts you back in the mindset that you’re doing the right thing for your life. At the same time, I don’t feel a lot of pressure. I don’t feel like everything is riding on this fight. I just want to go out there and perform and I’m ready.”

Cummins took more time off between fights than he usually does, and says the layoff was good not only for his body for also for his mentality. During his decorated wrestling career, he knew when he could rest and when he had to push himself. Yet being fairly new to MMA, Cummins would push himself a little too much to try to close the gap in his skill set. This time around, he gave himself a bit of a break.

“I stayed out of the gym a little bit but I stayed active,” he said. “As soon as I stepped into camp I felt great and everything was clicking. My timing was right as soon as we started and my body felt really good. I’m an older athlete now and I can’t really go as hard as I did when I wrestled at Penn State, you know? Even though that’s ingrained in me and I do it as often as I can, this time I kind of forced myself to go easier and train smarter. I work hard when I really need to, which is a couple days a week when we need a push, but the rest of the time we’re comfortable.”

As most fighters know, training smarter sounds a lot easier than it really is, especially when it is the grind that got them into the UFC in the first place, but more and more of the top guys in the sport have been touting a calmer approach to training, not only to reduce injuries, but also burnout.

Watching Ovince Saint Preux get thrust into a championship bout with Jon Jones last month tells any light heavyweight that anything can happen and to be prepared for the unexpected. However, Cummins is in no rush.

“Right now that’s a super long shot for me. I need a couple of wins strung together. This fight won’t set me up like that, but in a couple of fights I’ll be right there.”