Cummins Learns that Patience is a Virtue 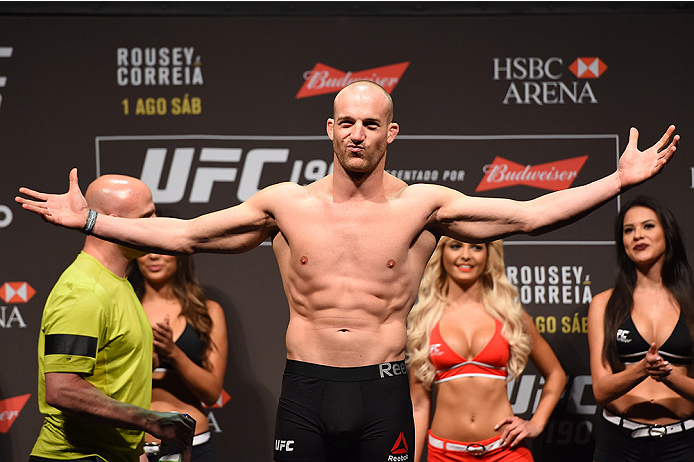 April 18 was one of those nights when everything was seemingly going right for Patrick Cummins. His takedowns were working beautifully against Ovince Saint Preux and even though OSP was jumping up after being slammed to the mat, Cummins had no problem putting him back down there. It was the perfect night for four minutes and 45 seconds.

Then he got impatient.

“I knew it was all taking a toll on him and I was slowly chipping away at him,” Cummins said of his early success against the highly ranked light heavyweight contender. “But I definitely got too eager. I heard ‘hey 15 seconds left,’ and I think ‘this guy’s tired, I’m gonna push him for another hard 15 seconds and put an exclamation point on this round and send him back to his stool like ‘oh man, what am I doing here?’ (Laughs) And as soon as I thought that and got the cue to get after it and go hard, dink.”

At 4:54 of that opening round, the fight was over and Ovince Saint Preux got his arm raised after catching Cummins and knocking him out. Just like that.

“That’s what makes the sport exciting, I guess,” Cummins said. “Anything can happen at any time, even if you feel like you’re in control. But that’s one I wish I could have back.”

Always quick with a laugh or a self-effacing comment, the 34-year-old Pennsylvania native often appears as the most happy-go-lucky person on the UFC roster, but when it comes to his day job in the Octagon and his fighting career, he takes it more seriously than many of his peers.

“I took that one pretty hard,” he said of the Saint Preux loss, only his second setback in nine professional MMA fights. “A lot of people talked to me about it and said ‘listen man, I’d agree with you being all depressed and down about this if that guy just went out there and walked all over you and beat you in every position. But you got caught. It just didn’t go your way.’ So I’ve got to take that and move on from it. You know what they say, adversity makes the man, so I’m hoping to bounce back pretty hard from that.”

He gets his chance on Saturday against number ten-ranked Rafael “Feijao” Cavalcante, and he’s ready for the bout, but just saying you’re going to bounce back is easier than doing it, and that took a little time to get revved up and on track again.

“I’ve done a lot of talking things out, a lot of mental work, and that’s part of it,” he said. “You’ve got to put it behind you, but it’s definitely easier said than done. I think about the what ifs, and that’s where it starts to kill you. So I put that out of my head and accept it for what it is. I look at myself and I think about the road that I’ve traveled, and I always take the long, hard road. I always learn the hard way (Laughs), and that’s pretty par for the course for me. But the major thing I should take from that is, yeah, that seems to be the theme, but I always overcome that obstacle. Adversity never gets me down.”

And so while most fighters would dread traveling to Brazil to face a Brazilian contender after a knockout loss, Cummins is excited to be back in action on a big stage against a quality opponent who could be a great stepping stone to bigger things should he win on Saturday night.

“I don’t see this as pressure,” he said. “I think what pressure would be is if they said ‘okay son, you lost that fight. We’re gonna put you against an unranked opponent, and if you don’t win this one, then maybe we thought wrong about you.’ That to me is a must win situation. So I’m glad I’m getting another shot at somebody in the top ten. That’s a good sign, and that’s what I’ve been asking for all along. I feel like I can go out there and beat these top ten and top five guys and that’s where I need to be competing.”

Even if it’s Brazil, where chants for the heads of visitors on fight night is a normal thing?

“After the last time there, I feel like it’s just a normal day,” he laughs, referring to his December 2014 win over Antonio Carlos Junior in Barueri. In fact, he was a little disappointed that he wasn’t the villain everyone expected him to be against the TUF Brazil winner.

“I was kinda hoping I would be,” he laughs. “Walking out for the weigh-ins, everybody’s getting booed already, I’m kinda excited to be the bad guy, and then it was mixed. I didn’t hear too many crazy boos, I heard a couple cheers, and during the fight, there was no hostility towards me. It kind of let me down.”

So no big deal fighting out of town then?

“I feel like I’ve always had good performances away,” the former Penn State wrestler said. “Going into somebody else’s house, I rise to that occasion, but I feel a lot of people are that way.”

Nah, most aren’t, but the ones who do rise to the occasion like Cummins are usually the fighters we’re talking about in ten years and not the ones relegated to the scrap pile of history. Cummins believes he’s got what it takes to do big things in this sport, and he’s not interested in waiting too long to get after it. So after his short notice UFC debut loss to Daniel Cormier in February of 2014, he ran off three consecutive victories. Should we expect more of the same after the OSP fight?

“You should expect the same thing,” he said. “I want to put these wins together, all against top ten guys, and I want that chance against Daniel Cormier again, and I think with a camp under my belt, that’s an interesting fight. I need that revenge. And I think if I put that streak together and go on a tear, I think that belt’s right around the corner for me. But I’m not getting ahead of myself, there’s one fight in front of me right now, and that’s all I care about.”

That’s a man who learned his lesson about patience.