Kansas City welterweight Zak Cummings held off a stellar effort from Copenhagen’s Nicolas Dalby in a UFC Fight Night prelim bout at Arena Zagreb in Croatia on Sunday, moving to 4-1 in the Octagon with a three-round unanimous decision victory.

Dalby started fast, firing off kicks from all angles. But the veteran Cummings wasn’t bothered by his foe’s aggressive style, eventually landing his own strikes, dropping Dalby to the mat with a right-left to the head. Cummings nearly sunk in a choke, but Dalby defended well and got to his feet, where he resumed his striking attack.

The Dane kept the pressure on in round two, but Cummings met Dalby’s aggression with pinpoint counters that marked his opponent’s face up and extended his apparent lead on the scorecards.

A slip to the mat at the midway point of the final round halted Dalby’s positive momentum, allowing Cummings to do work from the top position, but with a little over a minute left, the “Sharpshooter” rose to his feet and went right back on the attack, refusing to go away without a fight. Cummings ate some hard knees at close range, prompting him to take Dalby down, and he was able to keep the fight there until the final horn. 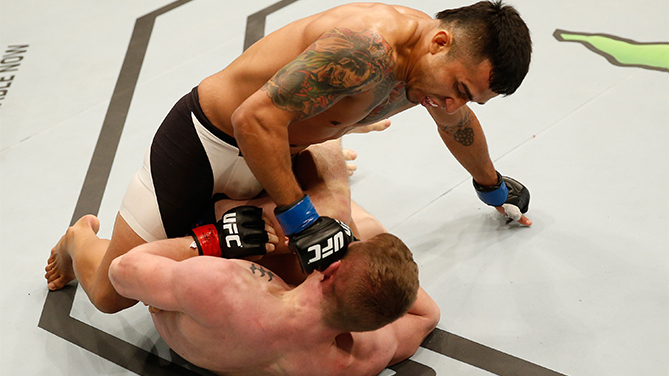 It’s usually feast or famine when it comes to bantamweight Ian Entwistle and his leg lock attack, and on this night in Croatia, it was famine, as Alejandro Perez showed solid defense before roaring back and stopping his opponent via strikes in the first round.

There was a wild start to the bout, with Entwistle going all in for the leg lock, and when he couldn’t get it, the Brit complained to referee Grant Waterman that his foe was greased up. Waterman checked Perez and found no issues, and when the bout continued, Perez briefly rocked Entwistle as “Enty” shot in. Entwistle recovered quickly and went back to his leg lock attack, but Perez defended well and began fired back with strikes to the face. Eventually, the series of unanswered blows led Waterman to stop the bout at 4:04 of the first round.

Lightweight star on the rise Mairbek Taisumov made it four consecutive knockout wins, impressively finishing Octagon newcomer Damir Hadzovic in the first round and making it clear that he’s ready for the next level in his career.

The fists were flying from the start in this one, and while the Copenhagen-based Hadzovic had more than his share of success against the veteran, eventually Taisumov found his range and he rocked Hadzovic with a right hand. Hadzovic gamely fired back, but it was the Chechen product who was landing the harder blows, and after a right uppercut floored Hadzovic, referee Kevin Sataki wisely stepped in and stopped the fight at the 3:44 mark.

Poland’s Damian Stasiak didn’t allow Zagreb native Filip Pejic to get a win in front of his hometown fans, submitting the Octagon newcomer in the first round of their bantamweight bout.

Stasiak quickly put Pejic on the deck to start the bout, quieting the crowd. Pejic got up just as fast, giving his fans something to cheer about again. Stasiak did get the fight to the mat again though, and this time he took his foe’s back and ended the bout, with a rear naked choke producing a tap out at the 2:16 mark. 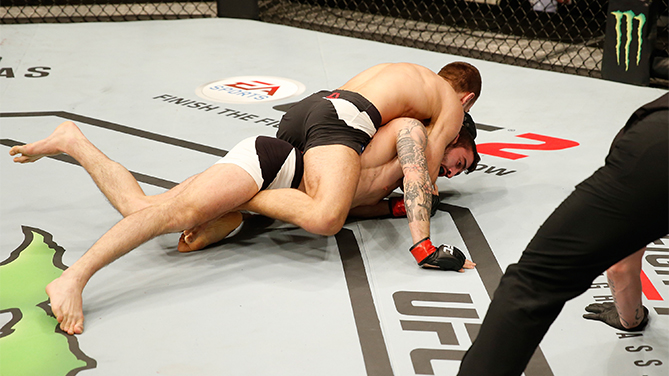