Cummings has discovered a huge reason to deliver Octagon success 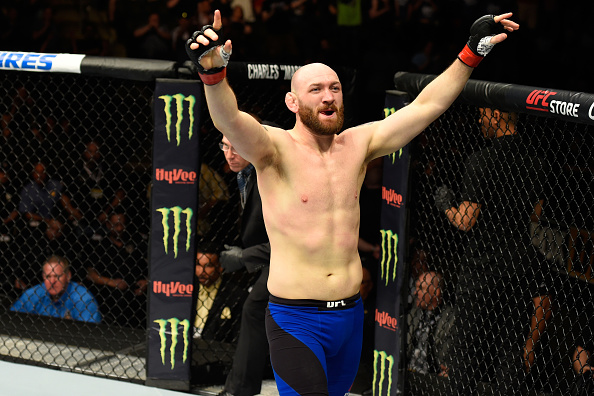 Zak Cummings celebrates his victory over Nathan Coy at Fight Night Kansas City" align="center" />
Zak Cummings has always been a dangerous fighter, one of those competitors who had the skill set and determination to beat any welterweight in the world on any given night.

In October, he got a lot more dangerous when he became the father of Kyleigh Brielle Cummings.

“I feel like if I’m gonna do something, I need a reason for it,” he said last week. “My daughter just turned 11 weeks a couple days ago and I’ve only been in person with her a few of those weeks. I’m not gonna miss that time for no reason. I’m not gonna go out of town and coach and train and do my fight camp and watch her get bigger and get her personality through Facetime. It gives me more of a reason to do what I’m doing. I can’t just do this for fun right now, because I’m missing a huge part of my daughter’s life. It backs up the reason of why I’m doing things.”

That makes Sunday’s return to the Octagon a perfect storm of sorts. The new dad and longtime Missouri resident fights at home against Thiago Alves in St. Louis, and at 33, Cummings is in with arguably the biggest name on his resume thus far. Yeah, there have been fights with the likes of Tim Kennedy, Gunnar Nelson and Santiago Ponzinibbio, but he’s never felt as prepared for the next level as he does now, and with the added motivation of his daughter brought into the mix, Cummings believes this is his time.

“He (Alves) is the name most people recognize, he’s been around forever, he’s an exciting fighter, a very dangerous guy,” the former Ultimate Fighter 17 competitor said. “He’s fought for a title, fought a Who’s Who of the welterweight division, so I think he’s definitely an opponent that can help push me to that next level. I was pleased with the fight, I think I match up very, very well with him, so I think he is that guy.”
MORE FROM ST. LOUIS: Reasons to Watch | Explose main event set for Sunday night | Three fighters On the Rise | Free Fight: Choi vs. Swanson

It’s the way of the world in the fight game. You don’t get to a certain level until after you beat a name opponent ahead of you. Cummings, 6-2 in the UFC since coming off TUF 17, has had a couple opportunities against Nelson and Ponzinibbio, but came up short. He knows he can hang with that level of opposition; now it’s time to beat that name.

“I think coming in through The Ultimate Fighter, I was getting a lot of those Ultimate Fighter-quality opponents,” said Cummings, a pro since 2007. “I’ve been around the game a long time, and I think I was above that. I didn’t perform how I thought I should on the show, but I was just flying under the radar.

“Then I had a couple ranked opponents and it just didn’t go my way,” he continues. “I had a weird injury in the Gunnar Nelson fight with my eye and that definitely impacted that fight. And the Ponzinibbio fight was extremely close and, depending on what you’re looking at, it could have gone either way. He hands down won the third round, but the first two were very, very close. He’s doing really well and it proves I deserve to be at that level, and everybody else, I’m pretty much running through. So I’m excited for this year. I think 2018 is gonna start off with a bang and I think I have a bright future in front of me.”

Since the Nelson defeat in 2014, Cummings has elevated his game, going 4-1 with three finishes. He’s won two in a row, submitting Alexander Yakovlev and Nathan Coy, and while he’s in one of the UFC’s most treacherous shark tanks, he hasn’t gotten the attention some fighters with that same slate in their last five bouts have received. But he’s not ranting and raving about it, as he’s confident his time will come.

“I understand it, I get the game,” he said. “It’s the entertainment business.”

But you’ve been very entertaining, Zak.

“I know, I’m a very entertaining fighter. I like to finish fights. Even if I lose, it’s entertaining, and if it goes to a decision it’s entertaining. Maybe I haven’t done my part as far as pushing myself as much on social media. And some people can do some jump, spinning, twist, cool-looking stuff. (Laughs) I don’t know exactly what it is. I know I can do better on social media and start building my brand. But if they’re looking for people who are going out and being entertaining and winning fights, my time will come. If I keep doing what I’ve been doing, I can’t really be denied too much longer.”

And just for the record, Zak Cummings is undefeated in 11 fights in Missouri.

“That is very true,” he said. “Can’t forget that little stat.”