A Cuban Odyssey on the Road to UFC 148

"To be successful here you have to devote yourself to this 100 percent." - Yoislandy Izquierdo 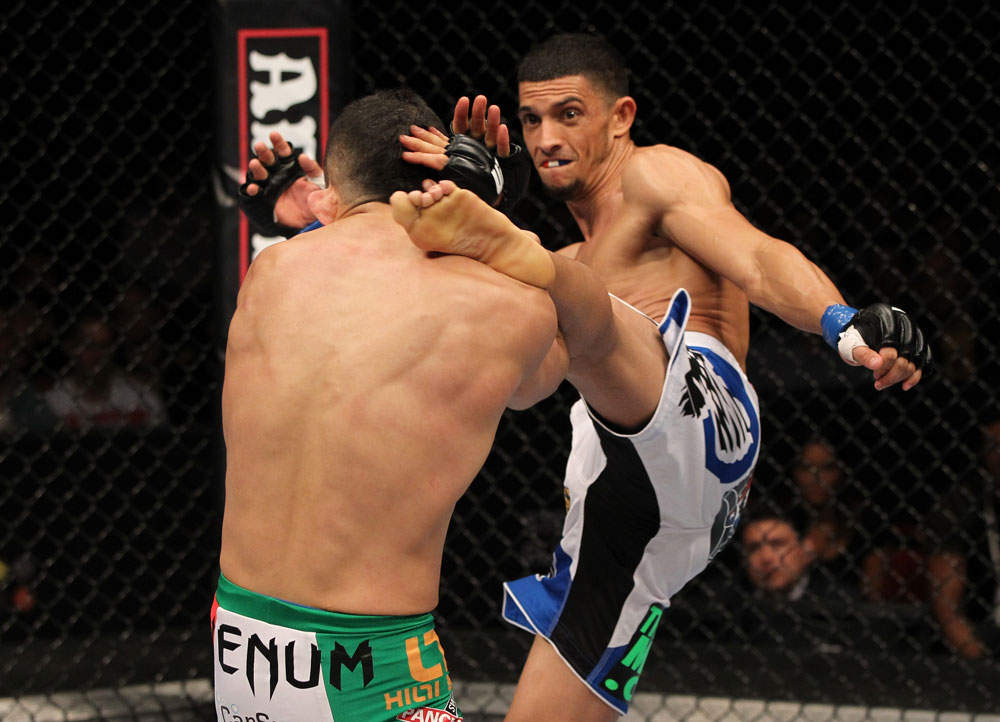 This Saturday, July 7th, in Las Vegas, the main event of UFC 148 is a rematch with historical overtones between the middleweight champion, Anderson Silva, and the challenger, Chael Sonnen.

Also in action are Tito Ortiz and Forrest Griffin, who will meet to close one of the most significant trilogies in the history of the UFC. The fight also marks the end of the career of the man formerly known as “The Huntington Beach Bad Boy.”

But before these highly-anticipated matchups, the event will open with a fight between Brazilian Rafaello Oliveira and Cuban Yoislandy Izquierdo in the only preliminary fight that will be transmitted by Facebook.

A few days ago, I spoke with Izquierdo in Miami, and even though we talked about his career, goals and achievements, what drew most of my attention were his history and his odyssey to reach the United States to try and achieve the famous "American Dream."

Yoislandy is a young fighter with a record of 6-1, who lost against Reza Madadi in his UFC debut on April 14th in Sweden. However, optimism has gripped the Caribbean fighter, and he now feels very confident for his appointment with Oliveira this Saturday.

"With respect to the previous match, we changed the concept of training, changed the gym, and we have done more wrestling and more Jiu-Jitsu and worked with better training partners", said Izquierdo.

Back to his personal history, Yoislandy told me how he always wanted to leave Cuba because of the lack of possibilities and future on the island. But when he explained to me what he had to do to reach the United States, that was when I understood the vast implications of his personal history.

An uncle pulled him out to Spain, and from there he traveled to Costa Rica and crossed by land to Guatemala, from where he continued his way to Mexico. "It was all very dangerous, because we were a group of six Cubans and the people there knew that we were not from there," he added.

We all know the danger to which immigrants seeking to reach United States by crossing Central America and the huge Mexican territory are exposed to during their journey. Robbers, drug dealers, fraudsters and much more are what the thousands of desperate people trying to reach the border encounter.

For Izquierdo, the experience could not be complete without spending a month by a Mexican prison and witnessing shootings on his way up to the United States.

"Incredibly, we felt better in jail because we met with other Cubans and we made a good group and helped each other", Izquierdo explained. He paid $500 and was able to leave the prison with the only condition that he had to leave Mexico in 15 days. Time wasn’t on his side.

Without leaving aside the dangers on the road, he could arrive at the city border of Matamoros and then cross the border. "I had a lot of stress and was afraid of Mexican police, but finally I was lucky to get to the border. Many do not have the same fate", he added.

From then on, using the immigration advantages of Cubans, Yoislandy went to Miami and worked on what he could while still training mixed martial arts with an eye on the UFC. His career started in the MFA and the CFA and he was very successful, with six wins and no defeats until the call of the UFC came and he was able to make his dream come true.

"My family in Cuba is very proud of me and I'm still working to continue climbing positions here," he said, showing a smile from ear to ear.

After knowing his incredible story, there is no doubt that this young man who left Cuba a few years ago has advanced tremendously, but that he still has far to go, not only in his career but in his life.

The path of the child who started practicing karate to combat asthma has just started. He even had to go to karate to defend himself because he says that he had very big ears as a child and the other children made fun of him. So it was always fighting, until the eighth grade, when he went through surgery.

A big difference he notes in his life is that in Cuba the people laughed at the problems and there was much to be done. Here, in United States, you must be more responsible, work harder, and if you run out of money, you stay on the street. It's that simple.

His road to the sports world in the United States has been different compared with other renowned Cuban athletes as Hector Lombard, the former Olympian who will make his UFC debut later this month. Or others like Joel Casamayor and Yuriorkis Gamboa, former boxing Olympic champions while living in Cuba and later professional world champs after defecting from the communist country.

But the 28-year-old Izquierdo is convinced that he can go far in the UFC, and his first step is that he is now dedicated completely to mixed martial arts and does not work anywhere else.

"To be successful here you have to devote yourself to this 100 percent," he explained.

His next fight against Oliveira is very difficult, especially because his opponent is a fighter who is a black belt in Brazilian Jiu-Jitsu, and the fight on the canvas was what cost Izquierdo against Madadi in his debut. But his determination in his life, first to leave Cuba in very difficult conditions, and then to get to the UFC, shows how immense his heart is and also that, in his mind, it is clear that the road to success comes with hard work.

His engine is his family - his two daughters (one in Cuba and one here), the brothers and his mother left behind in Cuba, and his wife in Miami - and his dream is to settle in with the UFC to be better off economically, and then help his relatives on the island and create a charitable foundation.

"When you help others, the good returns to you," said this Cuban fighter, who has come so far and expects to continue to rise up that giant mountain called life.