You’re not going to find a more likeable guy in MMA than Cub Swanson. The southern California native has been a fan favorite since the WEC days, showing incredible heart and determination every time, he stepped in the cage.

“Killer” Cub has 19 UFC fights under his belt, earning Fight of the Night awards in six of those bouts and knockout of the night in two others. Simply put, Swanson always brings it and that’s why fans love him.

On May 1st Swanson will take on Giga Chikadze at UFC Fight Night: Reyes vs Prochazka. Take a look back at some of his best moments on UFC Fight Pass before he makes the walk on Saturday.

Cub Swanson is always up for a good brawl and he got just that in a tough fight with Ross Pearson. In the final minute of the third round Swanson connected with a brilliant three-punch combo as Pearson lunged forward. The combo sent Pearson falling to the canvas, where Swanson was able to put the punctuation on his performance.

It was a great way to cap off his second win in the UFC and helped him gain momentum heading into a big fight with Charles Oliveira. 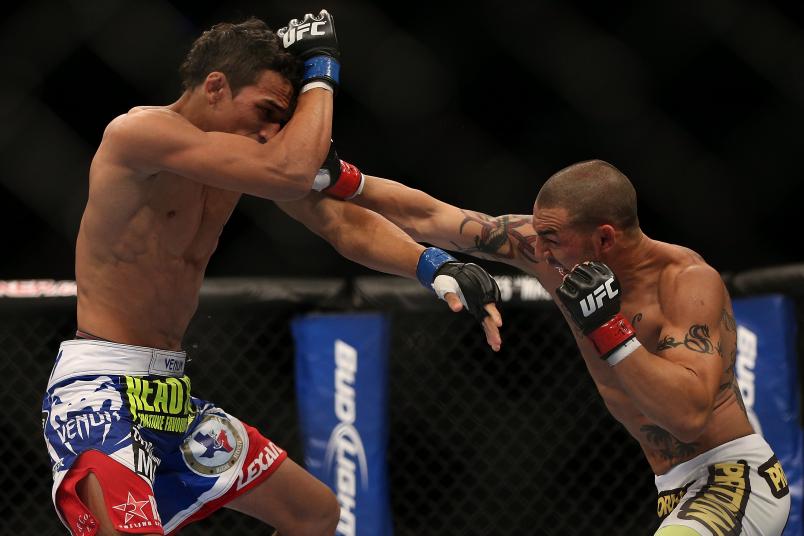 At UFC 152, Cub Swanson extended his win-streak to three, defeating Charles Oliviera by knockout. It was a one-shot punch KO that sent Oliviera crashing to the floor and writhing in pain. It was eye-opening and truly announced Swanson as a real contender at 145 pounds. 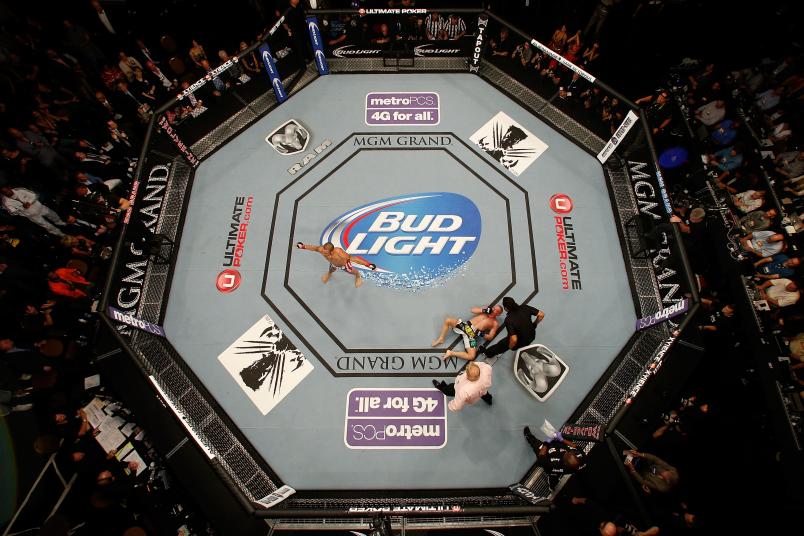 An overhead view of the Octagon as Cub Swanson reacts after knocking out Dennis Siver in their featherweight fight during the UFC 162 event inside the MGM Grand Garden Arena on July 6, 2013 in Las Vegas, Nevada. (Photo by Josh Hedges/Zuffa LLC)

A good battle brings out the best in Swanson, we saw it against Pearson and we saw it against Dennis Siver. The two featherweights were pretty even through two rounds and then Palm Springs finest attacked with a different level of ferocity in the final frame.

Swanson turned up the heat, swinging wildly until he was able to finally drop Siver. Then he connected with a massive right as Siver struggled find safety on his back. Siver was out on his back and Swanson stood up as one of the top contenders in the division. 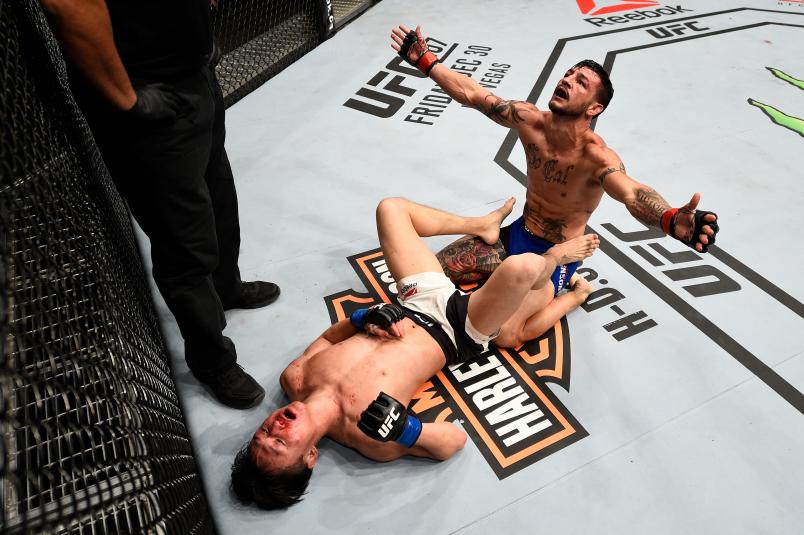 Cub Swanson and Dooho Choi of South Korea react after the conclusion of their three-round featherweight bout during the UFC 206 event inside the Air Canada Centre on December 10, 2016 in Toronto, Ontario, Canada. (Photo by Jeff Bottari/Zuffa LLC)

This fight, is the fight. If you decide to watch one fight off this lis make sure it’s Cub Swanson fight of the year with Doo Ho Choi. The featherweights went to absolute war, delivering crazy moments and an insane performance at UFC 206. 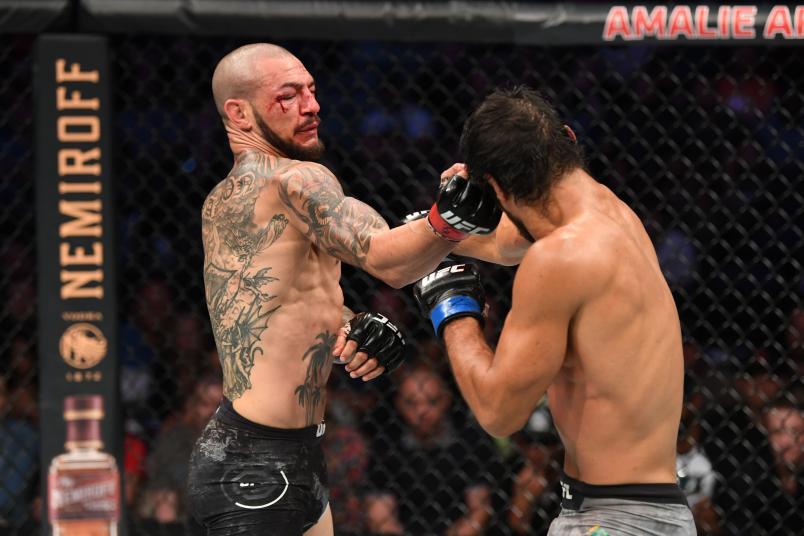 No one expected the Cub Swanson and Kron Gracie to engage in a 15-minute striking war, but that’s exactly what happened. The two featherweights went back-and-forth landing big shots and throwing at a furious pace.

In the end, Swanson had the biggest moments of the fight and peppered Gracie to earn the unanimous decision victory. The win was Swanson’s first since 2017 and brought in a flood of emotions. It was a great moment to see and was the turning point that Swanson was so desperately needing. 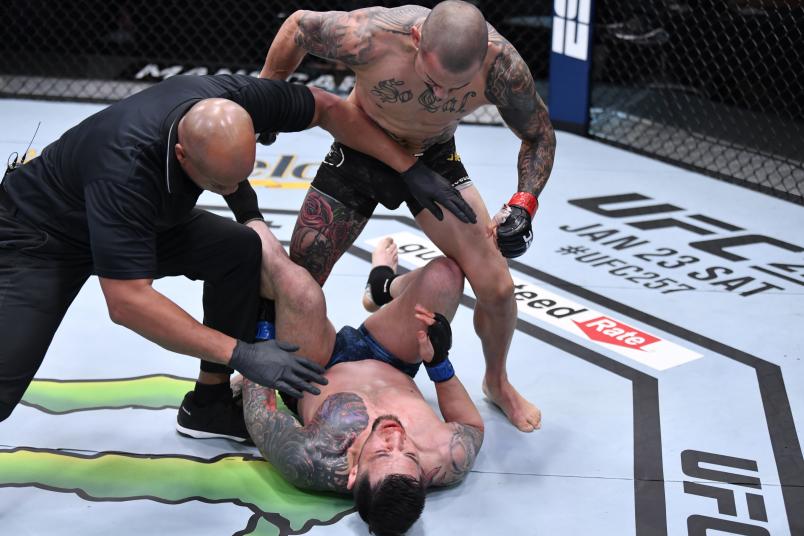 Cub Swanson (top) knocks out Daniel Pineda in their featherweight bout during the UFC 256 event at UFC APEX on December 12, 2020 in Las Vegas, Nevada. (Photo by Jeff Bottari/Zuffa LLC)

On December 12, 2019 Swanson participated in Quintet Ultra as part of Team WEC. Unfortunately for Swanson, he would tear his ACL and meniscus in the match. After a long year of rehab Swanson returned to action against Daniel Pineda exactly a year to the day at UFC 256.

He would go on to win the bout by TKO in the second round, earning his first finish since 2013. It was a big moment for Swanson, who worked incredibly hard to rehab from that devastating injury and it was the type of performance that reminded MMA fans that Swanson is far from finished.