It was going to be a quiet Saturday night at home for Cub Swanson on April 9. His wife, Kenda, was at UFC 273 in Florida, his brother was over the house to help watch the Swansons’ three kids, and everyone except the featherweight contender had already fallen asleep.

Time for a quick shower before settling in to watch the UFC 273 main card. Then Swanson’s phone started lighting up.

“I was tired, and then I started getting random texts saying, 'They have your fight on TV,'” Swanson laughs. “Huh? I turned it back on and I started watching and then at the end, it said that the fight was getting put in the hall of fame. And I was so surprised. But it was pretty cool.”

These are the times when you don’t mind getting a bunch of texts out of nowhere. And for the 38-year-old Swanson, seeing his December 10, 2016, bout against Dooho Choi get its rightful place in the UFC Hall of Fame’s Fight Wing isn’t just an honor, it’s a confirmation of the mission statement he set out for himself back when he turned pro in 2004.

“When I've been looking back at my career and what I wanted and what was most important, at the beginning of my career, it was never fighting for the title,” said Swanson, who is coming off a Performance of the Night knockout of Darren Elkins last December that lifted his record to 28-12. “That was never really my goal. My goal was to make my mark on this sport. And when I was coming up and watching highlight videos of Wanderlei Silva and the whole Chute Boxe-Brazilian Top Team beef they had in PRIDE and watching the beginning of Vitor Belfort and these elite killers in the day, they had masterpieces. And eventually watching Anderson Silva put on quite a show many times, I wanted that. That was my goal. I wanted to be so good at a point where I could inspire the next generation of fighters, and I think I've been able to do that.”

He has. A standout performer in both the WEC and UFC, Swanson’s resume is littered with killers, and while he’s had his ups and downs, his ups are higher than most of his peers, and he’s got the nine post-fight bonuses to prove it. And he’s done it all as a gentleman who’s always been a great ambassador of the sport.

But about that night in Toronto. 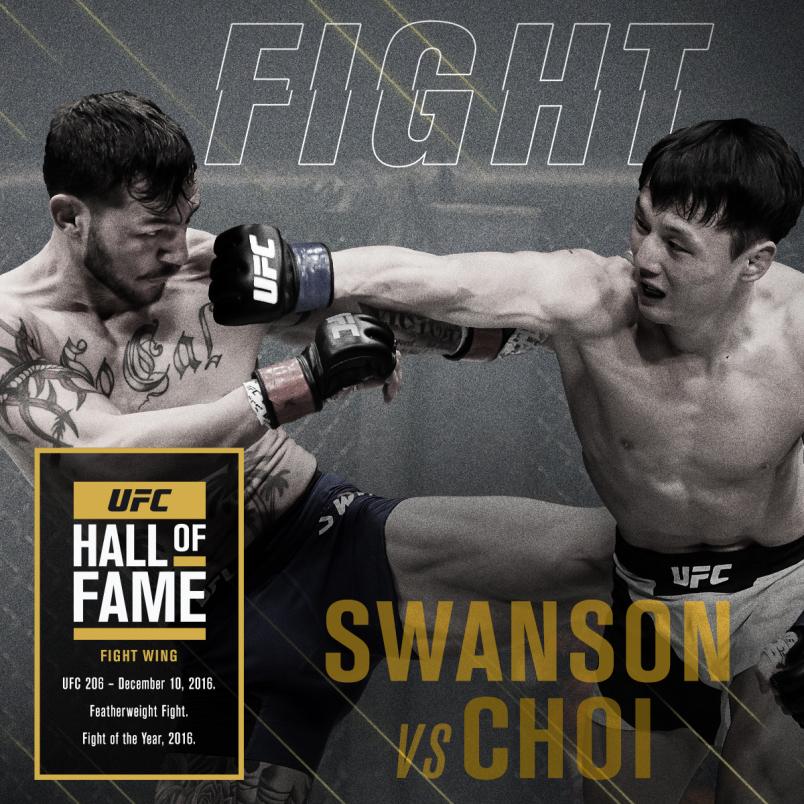 “Toronto has been good to me,” laughed Swanson who is 2-0 in the city, first knocking out future lightweight champion Charles Oliveira at UFC 152 in September 2012. That victory was the third in a six-fight winning streak that also saw him defeat the likes of Dustin Poirier and Jeremy Stephens. Swanson would lose back-to-back fights to Frankie Edgar and Max Holloway, but in 2016 he scored two wins over Hacran Dias and Tatsuya Kawajiri that had him back in business in the 145-pound Top 15.

See Who's Being Inducted Into UFC Hall Of Fame

Just 25 years old, “The Korean Superboy” looked as super as his moniker would denote as his first three UFC bouts against Juan Puig, Sam Sicilia and Thiago Tavares each ended in first-round knockouts lasting a combined four minutes and 33 seconds. The finishes of Sicilia and Tavares also resulted in Performance of the Night bonuses that had fight fans declaring Choi as the future of the division. So when the UFC 206 bout with Swanson at Air Canada Centre was announced, few blinked when Choi was installed as the favorite.

One of the few who did have an issue with it was Swanson.

“I definitely was insulted, and there were a handful of people that had been calling me out,” Swanson recalled. “For a long time in my career, nobody was ever calling me out, and then, all of a sudden, I seem to be the guy that people were looking like Top 15 and going, 'Oh yeah, let's call that guy out.' So that kind of irritated me that it seemed to happening, like, okay, they're picking me off as the weak link, their chance to get in the Top 15. And being the underdog as well, that irritated me. I definitely saw a lot of promise in him, and I saw a dangerous skill set but, to me, I thought everyone that had fought him didn't fight him very smart.”

With his existing talent, a stellar standup attack and a chip on his shoulder, Swanson was going to be tough to beat in Toronto. That didn’t mean Choi wasn’t going to try, and while the scores after three rounds read 30-27, 30-27, 29-28 in favor of Swanson, this was no blowout. Choi gave as good as he got for 15 minutes, and there was enough drama and high-level action to guarantee this went down in the books as one of the best featherweight fights in UFC history. And when it was over, the two combatants had a bond only fighters understand.

“I can say that for sure,” said Swanson. “We've never really been able to speak, but I feel like I ever see him, it's a hug. I respect him. And I think that's what's crazy about this fight game - we give it everything we've got, and the person's still standing at the end of the fight, you can't do anything but shake their hand and give them a hug, and be like, 'Man, okay. You're a tough dude and we went to battle and you're still standing and I'm still standing.' There's respect.”

That’s worth more than anything in this business. And when it was over, Cub Swanson and Dooho Choi had something people were talking about the next day, the next week, and still, nearly six years later.

“I knew it was kind of wild because of how the fight was going, but I didn't know it would be what it was,” said Swanson. “I knew it was a good fight, but the next week, I think I traveled to another UFC, and the amount of people that came up to me that night at the fight and then the next weekend when I went to another fight, and it wasn’t just fans, but fighters and coaches, and that's what I always gauge it off of - my peers. Fans will just tell you whatever you want to hear because they're just excited to meet you. But when coaches and fighters are going out of their way to tell you how great of a fight it was, that's when I was like, man, people really liked this one.”