When you’ve been in the fight game as long as Cub Swanson has, you’re bound to have some ups and downs.

Swanson is currently on a four-fight skid, dropping contests to tough, ranked featherweights such as Brian Ortega, Renato Moicano and Frankie Edgar. Yet despite coming out on the wrong side of those matchups, Swanson believes those losses have given him opportunities to see things from a different perspective.

“I’ve had a couple losses and every time you have a couple losses it makes you re-evaluate and do things you didn’t want to do,” Swanson said. “I went back and re-evaluated and switched some things up in my game, just trying to grow and learn as a mixed martial artist. I really feel like this is the best version of me.”

Swanson believes he is still putting it all together, but he also knows that his hard work and dedication to the fight game will pay dividends. Outside of the Octagon however, Swanson has a whole different battle to win, as he is the father of three little ones still in diapers.

“I’m changing diapers, my wife is changing diapers then I have to go to the gym and come back,” Swanson said with a smile. “Sometimes I’m just so tired I lay on the floor and let them crawl on me and try to pull my hair and do whatever they want to do. It’s a lot of work but I wouldn’t change it for the world.”

Spending time with his kids has supplied Swanson with some added motivation heading into his UFC Tampa showdown with Kron Gracie. He now views each fight as an opportunity to make his children proud of him for years to come.

And that’s helping him enjoy the process even more.

On Saturday he will face a Gracie competing in just his sixth professional fight. Swanson will enter the Octagon with 36 fights to his name and he plans on using his experience to help him take out the up and comer.

“At this point, I have to rely on experience,” Swanson said. “Youth is usually on the side of the other opponent; in this one we’re closer to the same age but he’s a well decorated jiu-jitsu player. And he comes from a lineage of people who are great at submissions, so I have to use my long years and the skill set I’ve learned in the Octagon and be smart in there.”

Swanson has actually had to be smart in competition against Gracie before, as they competed against each other in a jiu-jitsu tournament nearly 15 years ago. 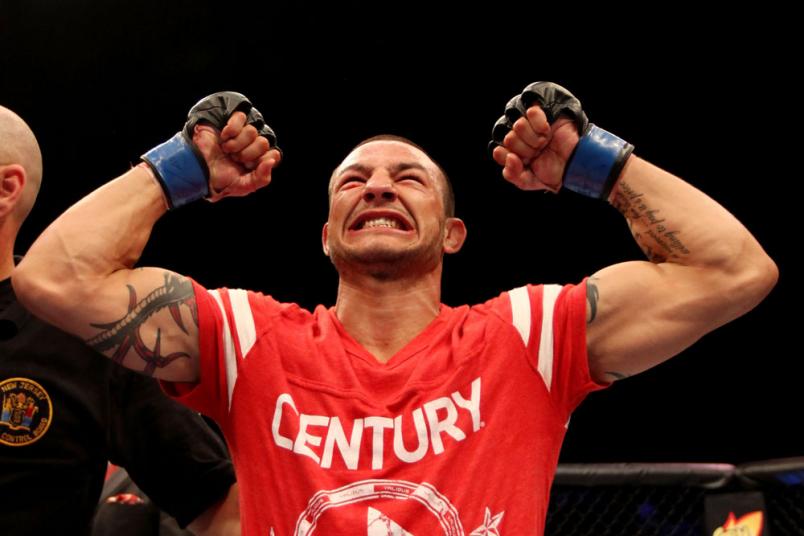 ATLANTIC CITY, NJ - JUNE 22: Cub Swanson celebrates his win by TKO against Ross Pearson (not pictured) in a featherweight bout during UFC on FX 4 at Revel Casino on June 22, 2012 in Atlantic City, New Jersey. (Photo by Nick Laham/Zuffa LLC/Zuffa LLC)

And while much has changed since the two tussled on the canvas, Swanson hasn’t forgotten.

“This is my world now and I think that I have the advantage that he’s stepping into my world.”

It’s going to be a good one. Make sure you make your way to ESPN+ to watch Swanson battle with Gracie in what should produce featherweight fireworks. If you don’t have ESPN+ get it here.