Cub Swanson: The Resolve and Resilience of a 'Killer Cub' 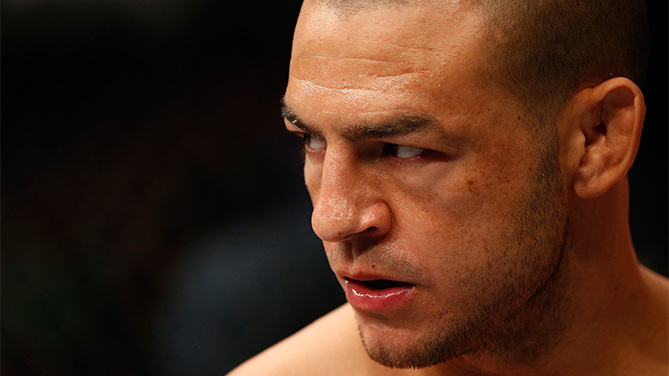 It’s hard to keep a smile from Cub Swanson’s face.
Over the past four years, the Palm Springs native has established himself as a longstanding threat in the UFC’s featherweight division, and he’s done so by putting on some of the most exciting performances the 145-pound ranks have seen under the UFC banner. The reputation of “Killer Cub” for handling his business inside the Octagon is on par with his love of life beyond the ruckus, and that has brought him a well-earned sense of calm in a sport where comforts come in small doses.

While that’s certainly an accomplishment, it was overcoming the trials and tribulations of a rough upbringing that made his future accomplishments possible. Swanson was able to navigate himself away from a path that most who travel are doomed to grim outcomes, and the strength he found in that struggle is something he never disregards. In times of success and setbacks, the perennial featherweight contender never forgets who he is or the roads he’s traveled to reach where he now stands. 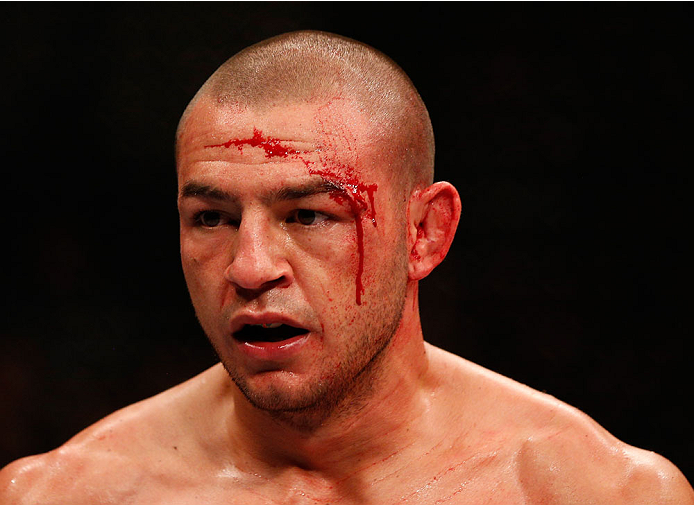 And it’s that understanding that allows him to find his peace no matter the circumstance. When he was dealt his first setback in three years against Frankie Edgar back in November, it was his sense of ingrained toughness that allowed him to get right back on his feet. Granted, he’s never been keen to coming up short, but his appreciation for the overall experience pushed him through. Swanson’s been in the fight game a long time and knows it’s not a journey that will last forever.

That said, he’s determined to enjoy every step he takes because regrets aren’t something he’s going to have any room for when it’s all said and done.

“The thing that has really been big in my mind throughout my entire time in the UFC is to really make sure I enjoy this,” Swanson said. “The ups and downs…I’m trying to enjoy all of it. That’s been the biggest thing for me. I constantly remind myself this thing isn’t going to last forever and I don’t want to look back at this when it’s over and regret not enjoying it more or not taking advantage of opportunities.

“My last fight was a rough little go, but it didn’t shake my confidence at all. I’m a fighter and those nights happen. People are going to make mistakes and have off nights, but it’s how you respond to adversity and get back up that matters. Sometimes you think you are prepared and you aren’t. But that’s the fight game. My confidence is right where it always is, especially for this fight. It plays right into my style. I respect what (Max) Holloway brings to the table, but I just feel like I’m better. I’m going to go in there and prove it.” 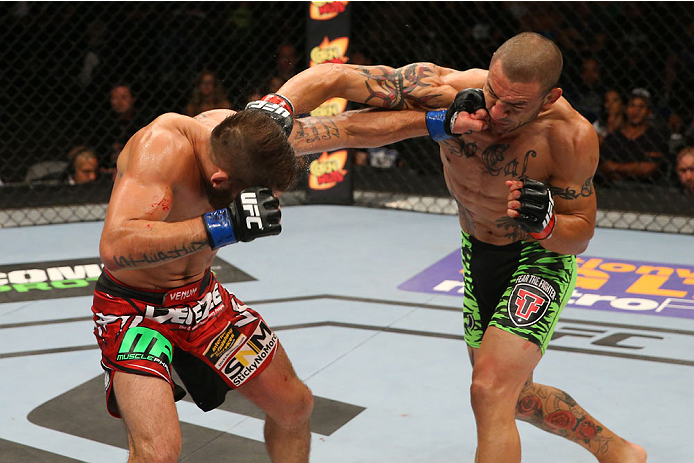 Following the setback in Austin, Swanson returned to California to figure out his next move. When a fighter is on a lengthy winning streak and things come to a halt, some competitors panic and make full-scale changes. But that isn’t Swanson’s way. His chill, laid back Southern California nature allowed him to take things in a measured stride and he set about making the tweaks and adjustments necessary for him to get back on track.

Nevertheless, things would shift into a higher gear once Max Holloway accepted the fight immediately following his victory over Cole Miller at Fight Night: Henderson vs. Thatch in Broomfield, Colorado. The talented Hawaiian had just put on one of the most impressive performances of his career against a savvy veteran in Miller, and the UFC offered him a bout with Swanson on the spot. Holloway agreed to the bout and their dance card was set for UFC on FOX: Machida vs. Rockhold on April 18 in Newark, New Jersey.

In addition to being an intriguing stylistic matchup for Swanson, it’s also one he believes falls right in line with the current featherweight divisional picture.

“It’s definitely a fight that makes sense,” Swanson said. “Max has been doing great. He’s had a couple of tough losses, which one of them I felt like he won the fight. He’s been game in every fight and I like him. I like the way he fights. From the perspective of where we are both at in our careers this fight made a lot of sense and it’s one those ‘Hell Yeah’ fights stylistically. We are both guys who go in there and throw down. Fans love that and this fight is on FOX so it’s a great stage to put on a show.”

While his bout with Holloway has the potential to put him right back into the hunt for a shot at the featherweight title, Swanson’s current mindset rests more in the bigger picture than what could potentially happen down the road. As a veteran of the fight game he knows you can only take things one fight at a time, and just because the saying has become a cliché in MMA, doesn’t take away from how truthful it is. 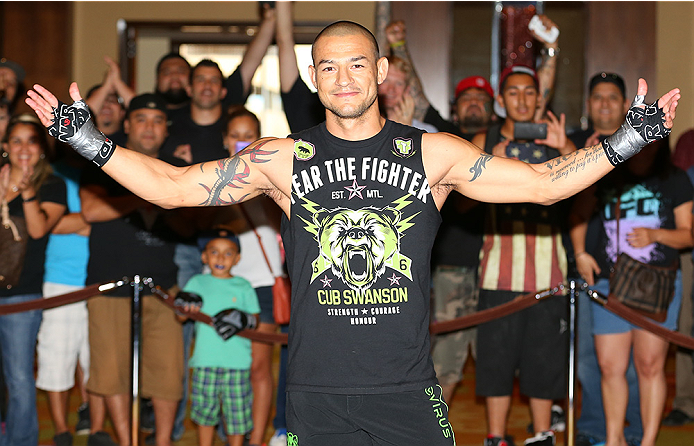 With that in mind, Swanson’s approach has come to be one others can draw from and relate to in their personal lives. From his time counseling troubled youths at the same detention center he once attended, to his increased visibility of being a popular UFC fighter; Swanson has seen firsthand how sharing his experiences can help those who may be in need of some inspiration.

“Over the years I’ve really learned to give part of it back,” Swanson said. “When I came to the UFC a few years ago I really wanted to be honest and be real. I didn’t want to hold back and I wanted to tell people how I feel about things. Sometimes I felt like I was confusing the fans with my answers, but I’ve always tried just tell them what’s on my mind and how I feel. Sometimes that can back fire on you though, and lately I’ve taken to posting my own things on social media that tells people how I feel or where I’m at mentally. I know there are a lot of fans out there who can relate and I want to share my journey with them.

“I know there are a lot of people out there who are going through struggles and relate to me in different ways. They care about what I have to say and appreciate when I share things, so I always make sure I take time to do it. It may seem small in the bigger picture of things but if you can help one person feel better or make their day a little brighter, then it’s all worth it. That’s how I feel anyways and that’s why I do it.”