“I’ve been excited for all the WEC guys. We’re like our own little club and I cheer for them all the time.” - Cub Swanson 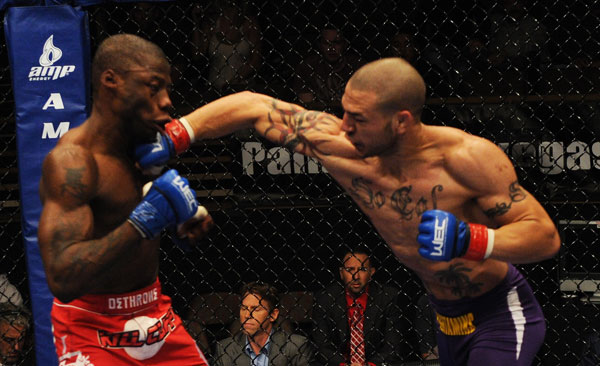 Saturday night’s first UFC on FOX card in Anaheim has been called the most important event in the history of mixed martial arts, but for featherweight Cub Swanson, it’s even bigger than that.

“People keep talking to me about the significance of the show and how big it is, and I can really appreciate that,” he said. “This is something I’m gonna look back on and I’ll be really proud of myself for being a part of this show. But for now, I’m just so excited about overcoming what I’ve gone through that this is a bonus for me. I get to go out there and I’m just focused on this one dude, and I’m gonna fight my heart out.”

It’s not the first time the Palm Springs native is competing in an MMA fight. No, when Swanson walks into the Octagon, it will be the 20th time he’s made that trip to compete against another fighter trained to beat him. But this time, it will mark both his first UFC bout and his first fight in a year and a day, a harrowing 366 days in which a serious sparring injury had him questioning whether fighting was even worth it anymore.

“It goes through my mind every once in a while,” said Swanson when asked if he ever thought about packing it in. “But I put these goals on myself and I haven’t reached them yet. If the doctor tells me I can’t fight and I have to retire, he could suggest it, but if he says you can fight, you’ll be okay, then why not? I haven’t met those goals and haven’t met those standards for myself. If I retired now, I would be disappointed in myself.”

Yet while it was bad enough to see the gash on his forehead that ended his 2009 bout with current UFC featherweight champion Jose Aldo, hearing about the effects of the shot he took while training for a July bout with Erik Koch could make even the most hardened fight veteran cringe.

Suffering orbital, nasal, and cheek fractures, in addition to a broken upper jaw in which all of the teeth on the upper left side of his mouth got pushed in, Swanson could have walked away from the game and no one would have blamed him. But that’s not how fighters are built, especially a fighter like Swanson.

“I just took three days off after surgery,” said Swanson of his rest period before returning to the gym. “People think that when they don’t see me, then I’m not in the gym. I’m not one of those guys. I’m not a guy who goes and parties and takes time off and does all that. I’m not satisfied until I win, and I haven’t won since November of last year. So I’ve been in the gym.”

And when he’s not in his own gym back home in California, he’s in Albuquerque with his comrades at the Jackson’s MMA gym, a place where he has found not only good training, and training partners, but a family.

“We all come from different places, but we’re all just one big happy family when we’re around each other,” said Swanson. “It’s a gym that happens to have good coaching, good vibes, and some of the best fighters in the world. And then to add that high altitude, that’s a bonus.”

Another bonus is having a strong support system on fight week, something fairly new to the 28-year old.

“When I used to train throughout California, I was just there by myself and I hung out in my room and hardly came out,” he said. “I cooked in my room and was very to myself. Now I’ve got a training partner on every card, this time I’m fortunate enough to be fighting on the same card as Clay Guida, and we’ll be hanging out and he’ll have his buddies coming to help and I’ll have mine, so when we get to Anaheim, we’ll have six solid coaches and four great training partners with us. It can be a huge advantage.”

Now all he’ll have to do is avoid any last minute mishaps. UFC bantamweight Brad Pickett, who returned to the Octagon after a long injury-induced layoff last weekend, told of family and friends threatening to wrap him in bubble wrap until fight time. Is Swanson following that same course of action?

“In a sense,” he chuckles. “Everyone’s got their jokes, so it’s not like I can run from those. But I learned to train a lot smarter. Before I would always be like ‘whatever, whatever,’ but my main concern was getting to one hundred percent without doing something stupid. I changed the way I did some of my rounds and I changed a lot of my training. I’m smarter and I gotta say I’ve never felt better. I feel strong, I feel explosive, my cardio’s crazy, my skills are all there, so I feel great.”

One of the top US featherweights of recent years, Swanson was a WEC standout from 2007 until the promotion merged with the UFC in late-2010. 5-3 in the blue cage, with his only losses coming to Aldo, Chad Mendes, and Jens Pulver, Swanson will get a stiff test in his Octagon debut against Ricardo Lamas, a fighter he has a great deal of respect for.

“The kid’s a stud,” said Swanson. “He’s had a couple tough losses as well as I have, but he’s very explosive. Obviously coming down from ’55, he’s a bigger dude, and I know he’s really developed as a fighter as well as I have. But I really believe that I train with better people consistently, and I think that’s my one edge, because he’s a damn good athlete.”

He’s also a fellow WEC vet, a badge of honor Swanson and his peers wear as they continue to introduce UFC fans to the lighter weight classes.

“I’ve been excited for all the WEC guys,” said Swanson. “We’re like our own little club and I cheer for them all the time.”

This weekend, the Californian will be the last member of the graduating class of WEC fighters to make his UFC debut. For those who have followed his career, it’s a welcome return. For those who have never seen him before, well, he’s not promising a new Cub Swanson. Instead, he expects to bring back the old one, the one who showed up against for a Fight of the Night win over Mackens Semerzier a year ago.

“The fight with Mackens, my manager told me ‘watch some old footage of yourself and remember what it used to be like,’” he recalled. “I remember that it used to be me being mean. I just wanted to rip through the dude. And that’s all I could think about. So I remember walking out there and looking across the cage and it was do or die for him. We locked eyes and I could see the same fight in him, and that’s why we got Fight of the Night. Both of us had that fire, and neither one wanted to back down. That’s kinda what I went back to so I could really get myself in the zone.”

On Saturday, Cub Swanson’s bringing it.