Swanson has made it a point to regain his obsession for fighting and family
By Jon Gagnon • May. 2, 2019

Cub Swanson is no stranger to Canadian success. In two trips up North, Swanson has secured Fight of the Night and Knockout of the Night bonuses.

He likes his chances of making it 3-for-3 on Saturday when he meets Shane Burgos at UFC Fight Night Ottawa.

“(Canada has) done well for me,” Swanson told UFC.com. “We’re going to go with that trend - that me fighting in Canada is good luck for me.”

Swanson is notorious for putting on electric fights for the fans and he expects this weekend to be no different. Partly because of the equally furious nature of his opponent. Burgos has two performance bonuses in his past four fights and always seem to be on the prowl for a finish.

Swanson called Burgos a “gritty New Yorker” who wants to throw down. That combination is recipe for a potential Fight of the Night.

“Just the fact that he’s someone that’s not going to lay and pray on me,” Swanson said. “(Burgos is) someone that wants to throw down.”

A performance bonus isn’t Swanson’s main priority, however. The longtime UFC vet has suffered three straight defeats and hasn’t been on the Octagon since last August – a layoff UFC fans aren’t accustomed to seeing from Swanson.

Although each loss came against a Top 5 fighter, Swanson thought it important to take some time off and get thing back on track. He wanted to fix some of the ways he trains and prepares. He also became a father to twins last September.

“I feel like I didn’t perform at my best. As a fighter you want to be selfish and obsess about it,” Swanson said. “Having kids is something new and exciting that has my attention. (This camp) I was able to get away a bit and obsess about the fight. It’s a better balance now.”

Swanson has made it a point to regain his obsession for his upcoming opponent. It wasn’t long ago when Swanson battled Doo Ho Choi and Artem Lobov, earning back-to-back Fight of the Night bonuses en route to a four-fight win streak. An obsessed Swanson could be dangerous in Ottawa. 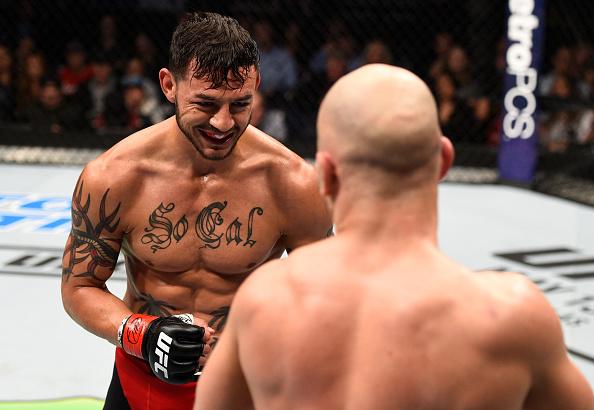 NASHVILLE, TN - APRIL 22: (R-L) Cub Swanson squares off with Artem Lobov of Russia in their featherweight bout during the UFC Fight Night event at Bridgestone Arena on April 22, 2017 in Nashville, Tennessee. (Photo by Jeff Bottari/Zuffa LLC/Zuffa LLC via Getty Images)