"If I can take him out early then I'll be happy, but if not then I'll be ready for the Fight of the Year." - Cub Swanson 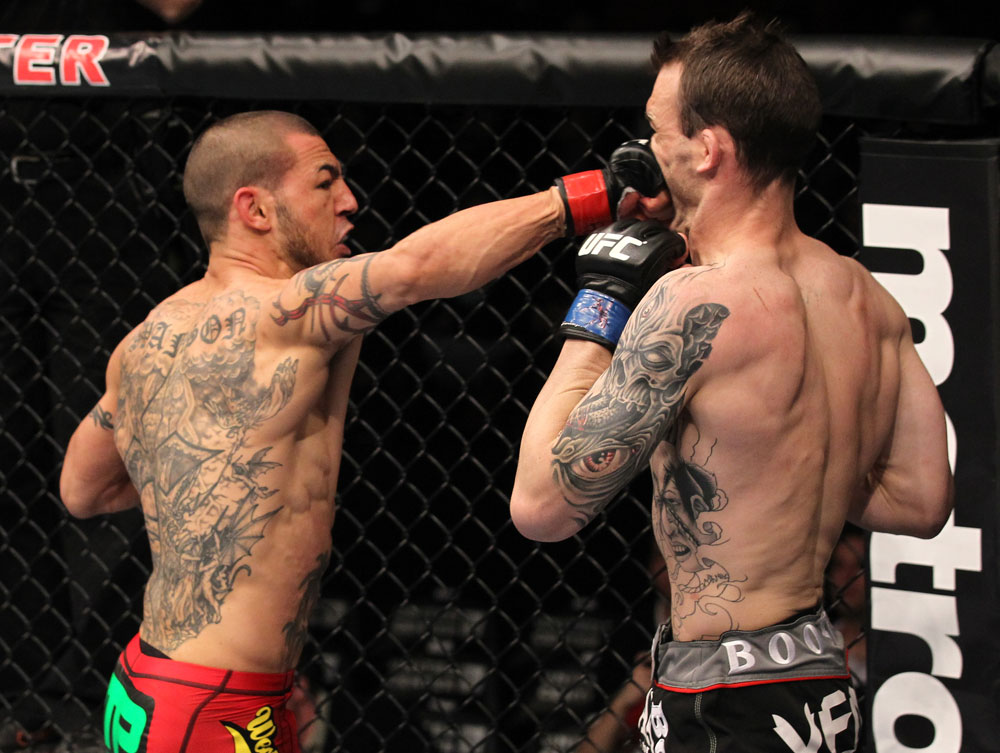 Is it possible to measure the amount of “fight” in someone?

If one could quantify the sum total of fight in UFC featherweight Cub Swanson, it would be a gajillion out of a potential gajillion quarks or whatever imaginary unit name we settle on. Put the nearly eight year professional cagefighting career with over 20 bouts aside, Swanson took an unfortunate knee to the face in practice leading up to his first UFC appearance in 2011, which pretty much destroyed the left side of his face. Swanson required reconstructive surgery to fix seven fractures, including wiring his jaw shut and the addition of three metal plates. Only five months later, Swanson fought in the Octagon - that’s a man with fight.

A year after suffering the devastating injury, Swanson is 1-1 in the UFC and ready to make the trip into the cage for a third time. “Being able to come back from that and perform at the highest level was huge for me,” says Swanson in the understatement of understatements made by the almost too humble fighter. If there was a time to quit a contact sport and no one would judge, it would be after a face caving incident like Swanson had. And yet, he used the dire situation as a learning experience, moved on from it, and is solely focused on more tangles in the Octagon.

“I had to almost relearn how to get hit again,” tells Swanson. “At first, I was a little shy and it took me a bit and I was wondering if I would ever get over that. It's all mental stuff that I had to work through. I've gotten so many hours of sparring with some of the best up-and-coming boxers in the world and some of the best MMA fighters in the world. That's my lead side and I have no issues with it. It's strong. There's metal in there. If anything, it is stronger than before. If anything, it taught me a lesson in there about fighting smarter. I used to think that I was indestructible. Now I know, I'm very skilled and I need to use those skills.”

These skills were on full display in January on the UFC on FOX undercard, where Swanson scored a picture perfect, one punch knockout on George Roop. The bout itself was a complete contrast to Swanson’s first Octagon outing against Ricardo Lamas, where the two attacked each other nonstop like magnets made of fists and feet. The 28-year old with “So Cal” and palm trees tattooed on his chest and stomach showed a patience and maturity with his striking, which is often unseen in many of Swanson’s previous fan-friendly brawls. It was a simple and effective finish that should have won Knockout of the Night - if it wasn’t for Lavar Johnson - and earned Swanson his first UFC victory.

“The combination is something I work here in California all the time - a jab, jab, cross,” remembers Swanson. “I knew that was going to work because being a tall guy he pulls his head back and most people can't close the gap to capitalize on his chin being in the air because he's tall. But I've got long arms and I'm pretty good at catching the overhand. I threw a quick jab and I caught him and I saw he was pulling back, so I threw another jab to load up my right. We knew he liked to counter hook and he did that and I ducked under the hook and threw my overhand and caught him flush on the chin.”

If coming back from the face shattering injury, facing two opponents in the UFC, and almost grabbing a Knockout of the Night award against the ever-game Roop wasn’t enough to earn the hypothetical gajillion quarks, then let’s talk about broken hands. The Californian has competed in multiple Fight of the Night bonus bouts in the WEC, and, even more noteworthy, was on the winning side of all of them. A lesser known piece of trivia is Swanson’s undefeated streak when he’s broken a hand (or two) in a fight. What this means is that he doesn’t flinch in a firefight, can excel in extreme circumstances, and needs to take better care of his hands or eat more calcium.

“I feel like I'm a scrapper,” states Swanson. “I'm very technical, but when it comes down to it I'm a scrapper at heart. I really like to fight like that sometimes. I think that sometimes people pace themselves and when they get sucked into my game maybe they don't do as well or maybe I'm just that good - I can't say. Those fights have all gone my way and I'm also 4-0 with every fight I've broken a hand in. That's a random fact. In the John Franchi fight, both my hands were broken and I won the Fight of the Night and I submitted him in the third. I broke my hand in the [Hiroyuki] Takaya fight, Donny Walker, and in the rematch against Shannon Gugerty. It definitely tells you what you're made of.”

That is not even the full extent of the broken hand woes, as Swanson’s had a total of eight including breaks in training. Thankfully, Swanson does train smarter and has remained uninjured since the facial incident. But while on this topic, let’s throw out another gem from the Swanson vault of toughness, which no one should ever try to replicate including Swanson.

“At the time, I was only doing jiu-jitsu in my first few fights,” starts Swanson. “My buddies and I were rolling one weekend at the park on the grass and I split my knee open pretty bad on a sprinkler. I knew I needed stitches, but I knew I couldn't train with stitches. I thought if I did it 'Rambo' style and burned it shut and as long as I could keep it clean that I could train on it, but it would be uncomfortable. I had my brother heat up a butter knife and stick it into the cut. He messed it up the first time, so he had to do it twice. I think back now on that and it was pretty stupid. Lesson learned.”

Up next for the 16-5 Swanson is a showdown on June 22nd with Ross “The Real Deal” Pearson at UFC on FX 4. A native of Sunderland, England, Pearson is a strict kickboxing striker who has gone 5-2 inside the Octagon, including two Fight of the Night performances. The Ultimate Fighter season 9 winner made a successful drop down to featherweight from lightweight against Junior Assuncao at UFC 141, and even a cursory knowledge of Pearson’s background shows he’s a very difficult man to beat, which is why Swanson not only wants the fight, but asked for it.

“The kid is definitely tough,” admits Swanson. “He comes forward and gets after it. I like him as an opponent. The reason I like the fight is because I think he's a top guy in our division. I thought he was a top guy at 155. At 145, he's a force. That's why I was excited about this fight. I had a few names thrown at me and this was the one that I really wanted. With all the injuries I've had, I know I'm not unbreakable and you never know when your career is going to end, so I want those memorable fights, I want those good fights, and I want to match up against someone who is going to put on that Fight of the Night performance and help make me a household name. His style is tough to deal with, but that's what I've been training for. If I can take him out early then I'll be happy, but if not then I'll be ready for the Fight of the Year.”

In preparation for “The Real Deal”, Swanson spent most of his time either in the gym he owns, Tru-MMA in Palm Springs, CA, or at the infallible aura-inducing Jackson’s MMA in Albuquerque, New Mexico. As a member of Team Jackson, Swanson works with Greg Jackson and Mike Winkeljohn while sparring with Donald Cerrone, Clay Guida, Diego Brandao, and a never-ending litany of the who’s who in MMA. If that wasn’t enough, Swanson also trains at Cathedral City Boxing Club with some of the best the “sweet science” has to offer. At Cathedral, one particular pugilist is not only their star pupil, but Swanson’s former classmate: Timothy Bradley.

“I admire his dedication and his maturity,” tells Swanson. “We went to high school and are from the same graduating class and we come from a small school. We are probably the two biggest athletes to come out of our school. He was the likely one because he's been doing it for so long. I was in and out of trouble and I made it into this sport later, but we're back to training together and it's awesome. The valley gives us a lot of love. It's good to see people you grew up with doing big things. Watching him train and being able to spar with him, it shows me what kind of level I can get to at some point.”

Back at home in Tru-MMA, Swanson wears two different hats: a still budding professional fighter and an experienced coach. “I have a group of guys at my gym in Palm Springs and being a teacher for the last four years as well as being a student of the game myself, it pushes you to another level,” says Swanson, whose best protégé is his closest: his 6-0 flyweight, older brother Steve. “Being a teacher makes you ask why you do things. It makes you more of a rounded fighter.”

A week from today in Atlantic City, New Jersey, Swanson’s evolution from young and tough to skilled and respected faces a dangerous next step against Pearson. “One thing I can promise, I've been with Zuffa for five years and I've literally progressed with every single fight,” affirms Swanson, who has overcome many hurdles out of the cage all for the chance of being one of the most memorable fighters in it. “I hope fans can appreciate that and see that. It has taken nine years of my life, my whole 20's, and I've given up a lot and made a lot of sacrifices in my life personally to be where I'm at. At the end of the day, a little thank you from the fans gets me geared up.”

All that fight fueled by a cheering Jersey crowd should mean a long bruising night on the boardwalk for Pearson.