Cub Swanson: Enjoying the Long Road to the Top

"I think one of the biggest things I’ve learned in my career is to enjoy the ride." - Cub Swanson 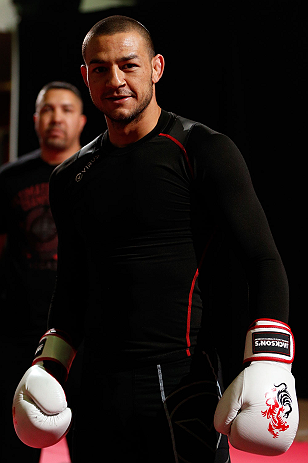 Nothing’s easy in the sport of mixed martial arts. But what featherweight contender Cub Swanson has been undertaking takes things to a whole other level. Splitting time between his home in Palm Springs, California and his usual training camp in Albuquerque, New Mexico, Swanson has been on a quest to not just add new wrinkles to a fight game that includes a black belt in jiu-jitsu, but to prove that boxing can translate over to mixed martial arts in a way many said could never be done.

Most of those ‘many’ have been denizens of the boxing world, quick to criticize the striking techniques of MMA fighters. The MMA community has always fired back by saying that to stand up in this sport you need different stances and techniques than those used by traditional boxers. In the middle is Swanson, who has meshed his work with renowned boxing trainer Joel Diaz and MMA striking guru Mike Winkeljohn to create a hybrid that has resulted in three consecutive knockout wins, including two straight KO of the Night awards.

But it hasn’t been without plenty of blood, sweat, tears, miles, and yes, getting yelled at from both sides.

“It was a very long frustrating road, getting yelled at,” chuckles Swanson, who returns to the Octagon this Saturday to take on Dustin Poirier in the UFC on FUEL TV co-main event. “It took me a while to get them to listen to me. I’d come back and my boxing coach would go ‘every time you come back you look like crap.’ And then I’d go to Albuquerque and they’d be like ‘aw, your stance is off, you’re doing this wrong,’ and I felt like every time I’d go to either camp I’d get yelled at.

“I finally learned to make those minor adjustments on my own, but that was very hard,” he continues. “It took me a good three years of saying ‘you know what, here’s the difference – here’s the minor detail that’s holding me back.’ Figuring all that stuff out and getting comfortable was a long process, but I’m finally feeling that I’m in my zone right now.”

The proof is in his stoppages of George Roop, Ross Pearson, and Charles Oliveira, all brilliant finishes set up by striking that was one step ahead of his opponents’ all night. The Pearson bout in June of last year was particularly revealing for the combinations Swanson unleashed and the angles he cut on the former Ultimate Fighter winner before lowering the boom in the second round.

“Every opponent’s different,” said Swanson. “It’s just a matter of me fighting my fight and not letting them get comfortable. For instance with Pearson, he’s more dangerous with his lead hand than his rear, except for his last fight (against George Sotiropoulos), where he showed real power with his rear. So the whole goal was to go ahead and circle towards his power hand because he puts a lot into his lead hand. And I just frustrated him by staying away from his lead hand and I would hit him and move. And I knew once he was frustrated he would either get over aggressive or sit back, and he got over aggressive.”

And that’s when Swanson finished matters. Yet despite that impressive victory and his subsequent knockout of Charles Oliveira last September, Swanson’s frequent trips between the ABQ and Southern California haven’t ceased.

“I travel back and forth between Jackson / Winkeljohn’s in New Mexico and back home, and when I’m home, all I do is work footwork, angles, and making my strikes as sharp as possible,” he explains. “Then I come out here and go balls to the wall, sparring and conditioning and stuff like that to test it out, make the adjustments, and see what minor details that I’m off on. Then I go back home and try to fix those, then come back here and put them to the final test, and then I’m usually fight ready.”

If it sounds like a lot, it is, but it’s work like this that puts the art into mixed martial arts for Swanson, as he takes every bit of what he’s learned from others, puts it into a pot, and mixes it until it becomes his own. As he puts it, “it’s a beautiful thing.”

“I have Joel Diaz and Antonio Diaz and I work with all these great boxers, and I come back and I’m sparring all these great guys and taking their advice. I’m working with Winkeljohn, Brandon Gibson, and Mike Valle, all these great kickboxing coaches and padholders, and Greg Jackson, and I get all their advice. But at the end of the day I have to be able to get it to flow into my game and my style that I already have. I can’t force something that’s not me, and I think that’s been the biggest key.”

And after more than eight years in the fight game, Swanson’s ability to put everything together couldn’t have come at a better time. He’s one of the top contenders in the 145-pound weight class, and a win over the highly regarded Poirier will put him right up at the top of the list for the winner of the bout between champion Jose Aldo and challenger Anthony Pettis. Not surprisingly, Swanson isn’t looking that far ahead, though he does have a request for those who do discuss such matters.

“I just want people to mention me up there,” he said. I” don’t care if I get in next, I’m just concentrating on this fight. But just mention my damn name when you mention the people who deserve it. That’s all I want. My time will come, I know it will because I’m just entering the prime of my career, I feel great, I’m training smarter, I feel better than I ever felt, and I feel confident.”

Still shy of his 30th birthday, Swanson has seen and experienced a lot more than most of his peers, and it hasn’t always been good, as serious injuries threatened his career and even had his family saying that maybe enough was enough. Swanson admits that he considered their request before deciding to continue.

“I really considered it, and the one thing I told myself was if you’re going to retire, are you happy with your career and the name you made for yourself?” he said. “Are you satisfied? The answer was no. I knew I could do better and I wasn’t satisfied. When I’m done fighting, I want to be satisfied with how far I’ve made it and the progression that I made. And I want to live up to my potential that I put on myself.”

He’s getting there, and while the journey may look difficult to those of us on the outside, to Swanson, every part of it is a joy.

“I think one of the biggest things I’ve learned in my career is to enjoy the ride,” he said. “My whole WEC career, and most of my MMA career, I have memories, but a lot of it’s like a blur. I just trained every damn day. If someone invited me to do something during the week, I would snap at them and say ‘I train all week.’ The problem with that is that when you lose, it takes a piece of your soul because you put so much into it. And now I just took a page out of (teammate) Clay Guida’s book, and I just go out there and enjoy it. I’m gonna enjoy every bit of it – the suffering, the weight cutting, the fighting, every part of it because I’m lucky to be doing what I’m doing.”