"I'm trying to be a perfect fighter that night and that's impossible, but
that's my goal. I want to be like Anderson Silva in there." - Cub Swanson 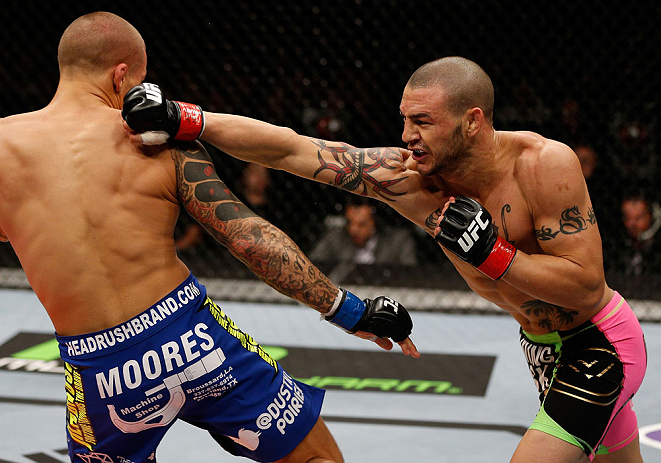 Cub Swanson has a question, and with him currently on a four fight win streak, it seems like he’s got the answer too.

“What's having all this power if I don't have the balance to use it?”

The UFC featherweight with an overall 19-5 record has seemingly discovered MMA’s equivalent of the age old question “if a tree falls in a forest.” If a fighter with the proverbial dynamite in their fists and feet doesn’t have their weight under them when they strike, will that punch or kick do real damage? Or land? Or even be thrown at all? For Swanson, maintaining his equilibrium while he’s vertical in the cage will allow him to deliver that devastating shot to make his opponent go horizontal.

“Everything that I have been doing in training has involved balance with explosive stuff in between,” says Swanson. “I feel like the more balanced I am in a fight in every position, the more opportunities I will have for a power strike. With only four ounce gloves and no padding on the shin, knees, and elbows, there's no reason why I can't put people away.”

At 29 years old, Swanson has hit a stride inside the Octagon beyond what many thought was possible. After a year on the sidelines and a second round loss to Ricardo Lamas in Swanson’s UFC debut, the product of Palm Springs scored back-to-back-to-back knockout victories in 2012 against well-regarded competition: gritty George Roop, The Ultimate Fighter season 9 winner Ross Pearson, and submission specialist Charles Oliveira. While balance and power resulted in three statement-like standup stoppages, this theory took on a new form in Swanson’s unanimous decision win over Dustin Poirier as he portrayed the immovable object to Poirier’s semi-stoppable force.

“I felt like he was a good fight for me stylistically,” reveals Swanson. “I knew he was going to be super-durable, have a lot of heart, and be a tough kid. I felt like he's a guy who will do well in this sport down the road, but at this point in my career, I was just a little bit better than him in every area. I was really confident going in there that I was going to get the W. I felt like he even surprised me with how tough he was. I really prepared to keep it standing, where I thought I would have more of an advantage. After the fight, I actually felt like the fight was easier on the ground than it was standing. If I wasn't so one-track-minded in that fight in particular, I probably would have kept it on the ground.”

Shades of Kenny Florian vs. Jose Aldo at UFC 136, Poirier attempted and attempted and attempted to take the fight to floor, but Swanson’s counter-wrestling was too on point. Swanson’s balance and power manifested itself as takedown defense, which helped him control the fight for the majority of the three rounds. In the three previous bouts, Swanson relied a lot on his sharper and stronger boxing, but against Poirier he displayed a wide array of kicks that went hand-in-hand with a very impressive sprawl. The improvements in the counter-grappling department are thanks to wrestling coach Israel Martinez.

“It's easier to throw kicks when your takedown defense is working and when people are already fearing your hands a little bit,” explains Swanson. “Adding the kicks and really working my takedown defense was really key in that fight and in the rest of my fights. I just needed to fix that and it was just minor adjustments. I actually went to Chicago with Izzy, our wrestling coach, before I started training camp and just wrestled for two weeks. That helped. He showed me a couple of little adjustments in my wrestling game. With the way people have seen how I have improved with my hands, I need to improve in other areas so that when they're worrying about my hands I can work in my kicks, my wrestling, my jiu-jitsu.”

It’s not just literal balance, but the aspiration of being a balanced fighter, or well-rounded, and being dangerous in all of those areas. What has been evident in these four winning Octagon appearances is Swanson’s cool, calm, and calculated demeanor, which denotes an overall evolving maturity that Swanson is showing as a fighter since crossing over from the WEC to the UFC. Swanson’s eagerness to engage used to come from aggression and now, it comes from confidence in his preparation. Swanson comes forward not because he has to, but because he believes he’s going to finish you.

“I'm just so confident in what I'm doing now,” affirms Swanson. “The confidence is just me being able to see things before they happen. I watch a lot of film, I spar a lot, and I see similarities in my training partners and my opponents. I'm able to look at them and say that these moves are going to work, and when they work in the fight exactly how I thought they would, then that is what gives me the confidence. I'm judging these right, I'm preparing properly, and I know exactly how I'm going to finish that guy. I'm trying to be a perfect fighter that night and that's impossible, but that's my goal. I want to be like Anderson Silva in there. You fight a high level guy, but you make it look easy. Just how confident and comfortable you feel in there and being on point. That's what I strive for. I want to make it look easy even though it's not. And, trust me, it isn't.”

Up next for Swanson is guaranteed featherweight fireworks against kickboxer extraordinaire Dennis Siver on July 6th at UFC 162. The Russian-born, German martial artist was a fixture of the UFC’s lightweight division for several years before dropping 10 pounds in 2012 and earning consecutive unanimous decision victories over Diego Nunes and Nam Phan in his new weight class. Siver has battled many of the Octagon’s best and felled more than a couple with his signature spinning back kick. With an overall record of 21-8, Siver is a tough and talented UFC veteran who will be a difficult mountain to climb as Swanson ascends the ranks to a hopeful title shot.

“Dennis like to kick box, he likes to play that game; I like to play that game too, so that makes me excited,” tells Swanson. “I do think when he does get in close he's going to look for a takedown. At the end of the day, he definitely throws it [spinning back kick] a little different and it's definitely a dangerous move, but I'm aware of it. That's all I can be is looking for it. He does have other tools. I do know what his dangerous moves are and I'll be looking for those, but I'm not going to give him the opportunity to throw those. I'm going to be way out of the way.”

In preparation for Siver, Swanson is busy tangling with the pool of famed fighters in Albuquerque, New Mexico. Although he does have his own gym named Tru MMA in Indio, California, Swanson is and has been an integral member of the Greg Jackson and Mike Winkeljohn fight team, which consists of few familiar names like John Dodson, Diego Brandao, Diego Sanchez, Clay Guida, Isaac Vallie-Flagg, Travis Browne, Julie Kedzie, Shawn Jordan, former interim UFC welterweight champion Carlos Condit, UFC light heavyweight champion Jon Jones, and on and on and on. The success of this particular camp has been astonishing for years now, and it continues to produce some of the best fighters in every single division. Despite the rise in popularity and subsequent increased scrutiny, the fighters continue to sharpen iron against iron year after year, making it consistently one of the, if not the, premier MMA camps in the world.

“Literally, it feels like we're in a bubble when we're here,” admits Swanson. “When I leave, that's when I hear about the ‘stuff’ - the controversies and the bull. When I'm here, no one talks about it. We just get in the gym and we train hard. There's nothing else here. Most of us are not from here and we don't know anybody else. There's nothing else to do than to meet up, get a workout in, and go watch a movie or go play mini golf or go race go-karts. It's like camp. It's fight camp, but it's like summer camp. It's miserable because we train like animals, but we try to enjoy it as much as possible.”

For Octagon aficionados who watch UFC Ultimate Insider, Swanson gave a peek behind the curtain of his strength and conditioning workouts which have pushed his balance and explosiveness to new heights. The particular segment showed Swanson with friend, training partner under renowned boxing coach Joel Diaz, and current WBO welterweight champion Timothy Bradley being put through the ringer by fitness trainer Kirk Chrisco at KIRKFIT in Indio. Between doing military presses while standing on a BOSU and the vertical leaps to land one-footed onto a BOSU, fights fans can see firsthand that Swanson’s theory is heavily practiced.

“Realistically, I've worked with tons of conditioning coaches and this guy is not much different except for the fact that he listens,” discloses Swanson. “He played tons of sports, he raced BMX, he's done bodybuilding, and he’s a real interesting guy. Every time a fight approaches, I'll say to him I need to be lighter on my feet or real heavy on my feet. And he'll go home and think about it and he'll throw them at me and I'll go through them and say I like this one or I don't like this one for this reason. We just communicate. I think what really separates him is he really doesn't have a big ego about it. That's been huge.”

This Saturday in Las Vegas, Nevada, Swanson will look to extend his win streak to five in a striker’s showdown with Siver. “It's simple, I'm going to put on the best performance yet and I'm going to really try and put him away,” states Swanson, who knows the quickest way to a featherweight title fight is to keep proving he’s ready against the challengers put before him inside the Octagon. “He's one tough dude and I think it's going to be a big task to do what I want to do and that's to put him away in exciting fashion. All I can do is put on the most dominating performance I can possible. I try to let my work speak for itself.”

And if he gets another one-sided win on top of the past four, the new question will be, “how do you not give Swanson a shot at the belt, if he’s clearly earned it?”