Cruz on why he, Dillashaw and Garbrandt all need each other

Dominick Cruz has a unique perspective on the upcoming bantamweight championship clash between Cody Garbrandt and TJ Dillashaw.

Not only did the Alliance MMA product share the Octagon with each man in 2016 – opening the year with a win over Dillashaw before falling to Garbrandt in December – but the former champion and current top contender has a long history with Team Alpha Male, the Sacramento-based fight camp that helped carry both of the UFC 217 co-main event competitors into the spotlight.

Even before he shared the cage with two of the best young talents to come out of the Alpha Male gym, Cruz had a heated rivalry with the team’s founder, Urijah Faber, whom he defeated at UFC 199 in the rubber match of their three-fight trilogy between facing next weekend’s title fight participants. 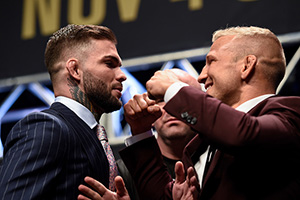 Given his wealth of personal experience with both competitors and the thorough, meticulous preparation he commits to his role as an analyst, there are few people as well versed on what factors could contribute to the outcome of the Nov. 4 title clash than Cruz.

Appearing as a guest on an episode of UFC Unfiltered, the 32-year-old who faces surging Jimmie Rivera at UFC 219 offered up his candid, cut-to-the-quick thoughts on the variables that could impact next month’s championship grudge match.

“He has all the tools – he has the tools to get the job done,” he said of Dillashaw, who held the bantamweight belt for 18 months before dropping the strap to Cruz in a hotly contested battle in Boston at the start of last year. “It’s just a question of how’s he going to deal with that whole team?

“That whole team is very interesting gang. Justin Buchholz likes to get in guys’ heads because he’s an ex-fighter that wanted to fight and didn’t quite get to do what he wanted to, so he’s stepped up and is somewhat living vicariously through the Alpha Male team.

“They all work together that team – they’re all a bunch of fighters that work together to try to manipulate, especially when it comes to TJ,” said Cruz of Garbrandt and his team. “They know everything about him. They know he was a hothead. They know that he went through and hit some of their teammates when they were training because he gets upset.

RELATED: The Exchange - TJ Dillashaw | Get Your UFC 217 Tickets | Cruz on UFC Unfiltered

“They just know so much about him that I feel that that is going to play a little part in the build-up to this fight that it’s going to mess with TJ a little bit to where he’s not quite 100 percent mentally there just because those were his old friends.”

Recruited by Faber to join the elite squad of lighter weight fighters competing out of the California capital, Dillashaw left the team in October 2015, moving to Colorado to train with the Elevation Fight Team and continue working closely with former Alpha Male head coach Duane “Bang” Ludwig, with whom he’d formed a strong bond. 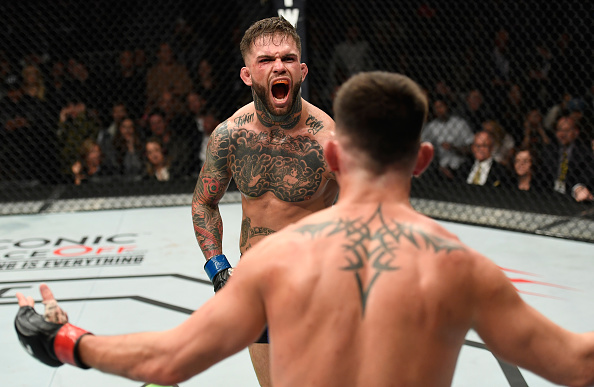 His departure was followed by plenty of finger pointing and harsh words, with Garbrandt happily taking a lead position in running down the former bantamweight titleholder, and he animosity between the two sides was a through line connecting the 135-pound ranks in 2016, with Garbrandt issuing a challenge to Dillashaw in the Octagon after winning the belt from Cruz.

The two were quickly positioned as opposing coaches on Season 25 of The Ultimate Fighter, with their championship showdown initially scheduled to take place this summer at UFC 213, but a back injury sidelined Garbrandt and resulted in the contest being pushed to next month’s return to Madison Square Garden.

And it’s that back injury that Cruz is most interested in when it comes to assessing the current champion’s chances.

“We’re hearing Cody talk about his back a lot; that it has had a lot of pain in it,” he said of Garbrandt. “The thing is, you’re not going to pull out of this fight, so welcome to being a champ.

“I said this at my post-fight press conference after we fought – I said, ‘It’s one thing to get the belt; it’s another thing to keep it after you’ve earned it and keep it.’ He’s had it a year and hasn’t defended it yet. Now he’s up and he’s got to pay the piper; now you’ve got to show up and fight.

“From what he’s said, he’s not 100 percent, but he’s got to jump in there and take this fight and we’ll see,” added Cruz. “I think he might be playing his back up a little bit to get TJ more confident and then he’s going to come in there a little bit better than he shows, but it’s an interesting dynamic how this whole thing is playing out.” 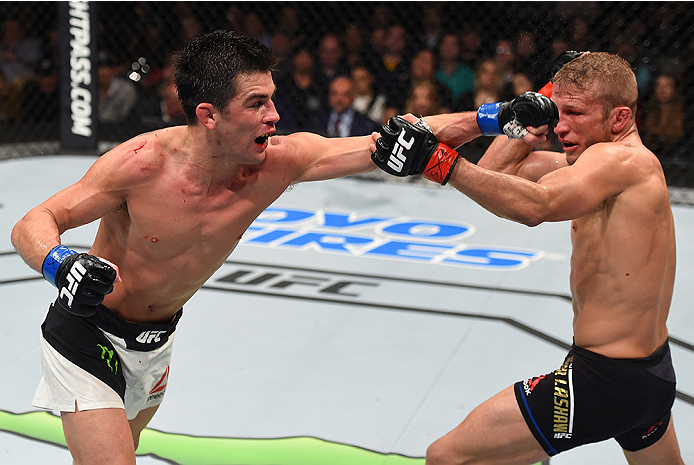 UFC Fight Night event inside TD Garden on January 17, 2016 in Boston, Massachusetts. (Photo by Jeff Bottari/Zuffa LLC)" align="left" />Given his history with the two and deep desire to return to the top of the bantamweight division, you can be sure that Cruz will be paying close attention to the action at Madison Square Garden.

Although he has a tough assignment on his hands a month later in Las Vegas at UFC 219, the former champion is quick to admit that he has his eyes on the gold and is eager to get a chance to win back “his belt.”

And while he’d prefer to do so against Garbrandt, he has no qualms about facing Dillashaw for a second time either.

“Right now, we’ve got a good thing with the three of us to where we can all gain something from each other because you need good opponents in order to have great fights and in order to create great champions. It’s just how it is; it’s a system.

“We all need each other in some sick way at the same time as we all want to hurt each other.”