Cruz Ready for His First Act as UFC Bantam King

"When I first fought him, I thought I could beat him and I wanted to beat him. It didn’t go that way, but I’m getting my shot at redemption and I’m definitely excited for it, without a doubt.” - Dominick Cruz 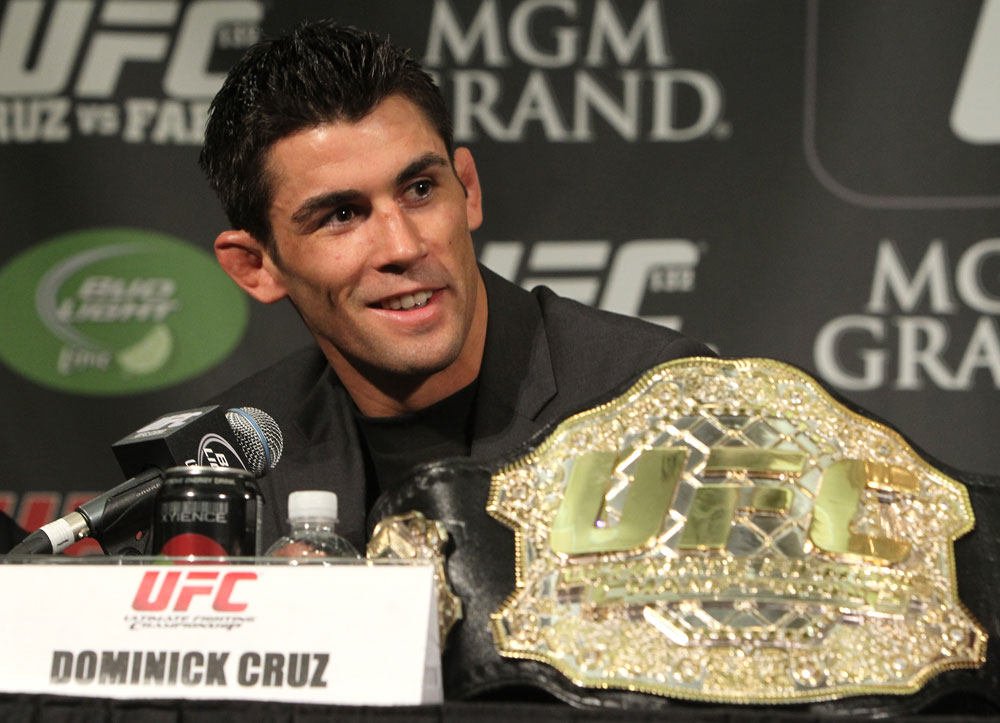 As legend has it, this whole Dominick Cruz-Urijah Faber rivalry – one which will be settled in the UFC 132 main event this Saturday in Las Vegas - didn’t begin on March 24, 2007, the night Faber defended his WEC featherweight crown with a 98 second submission win. It actually started earlier that week, when Cruz famously inked his signature over Faber’s face on the event’s fight poster.

Since then, Faber continued to see his star rise in the WEC before losing his title, dropping to bantamweight, and moving back to the top in the UFC. Cruz dropped to 135 pounds himself, became a WEC star and won the organization’s bantamweight title before finishing out his tenure there by winning the UFC’s first 135-pound belt last December.

That’s a lot of water under the bridge in four years, but neither fighter’s feelings for the other have diminished. So, Dominick Cruz, UFC bantamweight champion, before you get your shot at redemption against Faber, will you sign your name over Faber’s face again, just for old times’ sake?

“They actually made a rule that you’re not allowed to anymore,” he laughs. “They tell you that before you sign the posters now. I attribute that rule to myself and I think that’s where it comes from, so I won’t sign over his face. I don’t hate the dude, I just think he’s a p***k, that’s all. I don’t wish him death, I don’t wish him ill will, I just want to beat him and prove that I’m better, plain and simple.”

And while the storyline of Cruz looking to avenge the lone loss of his 17-1 career and trying to put to rest the specter of “The California Kid” over his head is a great one, it’s also accurate, as he admits that for four years, he’s pondered that defeat and the man who gave it to him.

“It’s something that’s sat with me for sure,” said Cruz, who is unbeaten at bantamweight. “I’ve been thinking about this fight for four years. When I first fought him, I thought I could beat him and I wanted to beat him. It didn’t go that way, but I’m getting my shot at redemption and I’m definitely excited for it, without a doubt.”

What makes it even better is that he will do it in front of the world as the main event in perhaps the biggest event of the summer. Now that’s the way to make an entrance.

“I never expect anything, but I was really hoping for this,” he said of his first UFC bout. “I was either hoping that we would be a main event or we would be coaches on the TUF show, and we got the main event, so I’m a happy man.”

With such a lofty spot on the card comes great responsibility though, and Cruz and Faber have been put through the media wringer in the weeks leading up to the bout. You won’t hear any complaints from “The Dominator” though; he’s just taking it all in, saying simply “I accept the challenge and I love it.”

Maybe it’s because this is his coming out party on the world stage. Sure, he got plenty of exposure in his WEC bouts, three of which had a championship on the line, but this is the UFC, so things are amped up considerably, and he’s facing Faber, the undisputed king of the lighter weight classes for years, and perhaps still the sub 145-pound divisions’ most recognizable fighter. So now it’s Cruz’ chance to introduce himself to the masses, and when those masses see him, they will likely be captivated immediately by his unorthodox but brilliantly effective standup style and footwork.

“It’s definitely something that’s been developed over the years,” said the 26-year old from San Diego. “If anybody goes back through the years and watches me fight against Charlie Valencia, which was my first bantamweight fight after my loss against Urijah, they can see the development from that fight up until now in my fighting style and it’s definitely changed over the years. I focus very much on improving every single fight and trying to come out looking like a different fighter in every single fight. And that’s exactly what’s stumping people, that I never look exactly the same for any fight.”

3-0 at 135 pounds when he upset Faber’s teammate Joseph Benavidez in 2009, Cruz burst onto the world radar in 2010 with a second round stoppage of Brian Bowles for the WEC title, and five round decision wins over Benavidez in their rematch, and Scott Jorgensen. The latter two fights were huge for Cruz, and not just because he defended his title, but because he proved that he had what it took to go five hard rounds. Faber, a championship fight veteran, has gone the route three times, but in an important stat, he lost two of those bouts (to Mike Brown and Jose Aldo).

“I know I can do it (go five rounds), and I know I can do it a very fast and almost unmatched pace,” said Cruz. “I feel that’s a big reason why this fight is gonna be mine because before my first fight with him I didn’t have the experience factor of that or even the big show fights at all. Now I’ve been in several big show fights, I’ve been the main event several times, and I’ve gone through five round wars several times. I know how to do it and I know how to stay composed through it all and I think that’s gonna be a huge difference in the fight.”

But what really makes this fight intriguing is that there are no cracks in either man’s foundation when it comes to confidence. Look at any of their fights and you’ll see it. In Cruz’ case, his confidence comes from his work with Team Alliance in San Diego. Just don’t call him cocky.

“What gives me the confidence is knowing what I go through in my training camp,” he explains. “My training camps are so, so difficult, and I know with every ounce of my heart that everybody that I’m fighting hasn’t trained harder than me. They might be training just as hard, but there’s no way they’re training harder than me, and that gives me a lot of confidence. And the fact that I know I can’t get tired in five rounds of fighting gives me even more confidence, because in my opinion, if I don’t get tired, I can’t get beaten. It has nothing to do with being cocky. I know the skill set of the opponent that I’m fighting, I know what they bring to the table, but the things that I do in camp prepares me for every skill set and everything that they have to show me. And I’m confident in that, and definitely far from cocky.”

When pressed, he’ll even give Faber his props. He knows that Saturday night won’t be easy, but is anything worth fighting for and getting ever easy? Not for Dominick Cruz.

“Somebody who’s had as many fights as him (Faber), you know he’s a threat,” said the champion. “He’s in the upper echelon of the weight class, and the things that he’s done over the years in MMA gives him the right to get a title shot. And the bottom line is that I’m excited to fight somebody that is in the top of the weight class because I want to fight the best guys in the world. And on top of that I get to kill two birds with one stone and beat the guy that gave me my only loss. There are a lot of people who could only pray for the situation that I’m in. I’m excited to go out there and prove what I can do.”