Cruz opens up about impending return 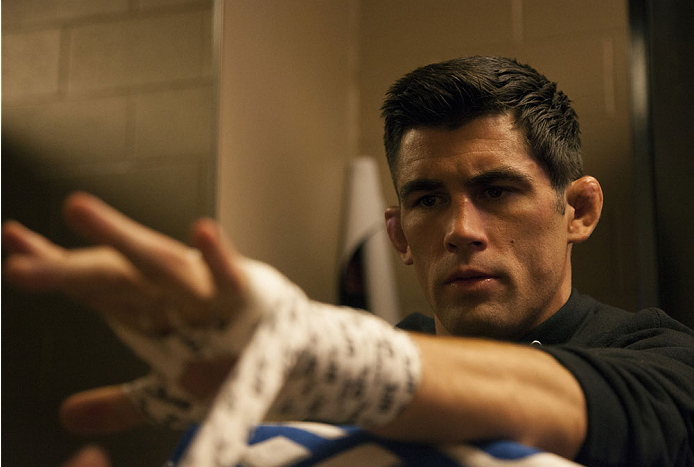 Like everybody else, Dominick Cruz got the news Wednesday. But it was the kind of news he’s been waiting to hear.

Cruz’ comeback from a series of injuries is firmly on schedule, with a date and an opponent set. His only goal now is to approach his training slow and steady – and perhaps most important, to stay injury-free.

The former UFC bantamweight champion, who was forced to vacate his title because of a torn ACL and subsequent groin injury, will face current champion TJ Dillashaw on Jan. 17 in a main event televised by FOX Sports 1 at a location to be determined.

UFC president Dana White made the announcement after communicating his intention with Cruz.

“He texted me at midday yesterday,” Cruz said. “He basically said, ‘Hey, we’re going to announce it Jan. 17. Are you going to be ready?’ He wasn’t really informing me as much as he was telling me.

“There was nothing really to think about or talk about. I wanted to get in there a long time ago.”

It’s been a tedious wait for Cruz, whose setbacks – torn ACLs in both knees plus a torn groin muscle – have limited him to just one fight in the past 47 months, a 61-second TKO over Takeya Mizugaki at UFC 178 in September 2014.

Now that he has a date for his return to the Octagon, he can prepare with a target in front of him. And it’s one he believes he can defeat.

Cruz, who turned 30 last week, is riding an 11-fight win streak and has lost just once in 21 career MMA bouts (3-0 in the UFC). He remains convinced that he’s the rightful belt holder, not Dillashaw, who upset Renan Barao for the bantamweight title at UFC 173 and then won their rematch in July, both by TKO.

“I was at the pinnacle of my career,” Cruz said. “I was doing better than what TJ Dillashaw has even shown. I cleaned out the division, and he’s been walking around pretending he’s champion.

“The competition I faced was top notch, the best in the world. Then once I cleaned out the division, TJ came up. It’s just a little different for him than it is for me. I got to earn that position, then I had to hand it over because of injury.”

That’s been the difficult part for Cruz, who never surrendered his title to an opponent and still remains at No. 2 in the bantamweight rankings despite his layoff. But his difficulties, he said, are now his motivation for a triumphant comeback.

“Going through all that, having everything and then having it taken away, you realize that it’s a privilege being at the top,” he said. “That’s something TJ and no other champion understands because they haven’t been through what I have.”

.@TJDillashaw Ill be back in plenty time to school YOU "Silly Dilly"Dnt u worry.May jus send @johnDodson back up to take care my light wrk.
— Dominick Cruz (@TheDomin8r) August 27, 2015

Any suggestion that he might benefit from a warm-up fight is promptly rejected. He wants his title back, and the fastest route is to face the current champ.

Cruz, who trains at Alliance Training Center in San Diego, has four months to get himself ready for a five-round fight. He recently began kicking drills and is dabbling a bit with wrestling, but he’s taking a slow approach for now before ramping up his repetitions.

“It’s all about taking my time,” he said. “I’ve got four months to prepare for this fight, so the key is, don’t rush it. I don’t need to be doing a crazy amount of (sparring) rounds until I get closer to the fight. It’s about training smart and still training hard.”

In the meantime, Cruz has been doing fight analysis for FOX Sports, which keeps him close to the UFC and provides insight into the sport. It’s not as good as fighting, but it’s a close second.

“It’s definitely a substitute,” he said. “The important part for me is to always be making strides and growth. When I’m in the studio, I’m still growing as an athlete because my brain’s improving and I’m understanding the game better.”