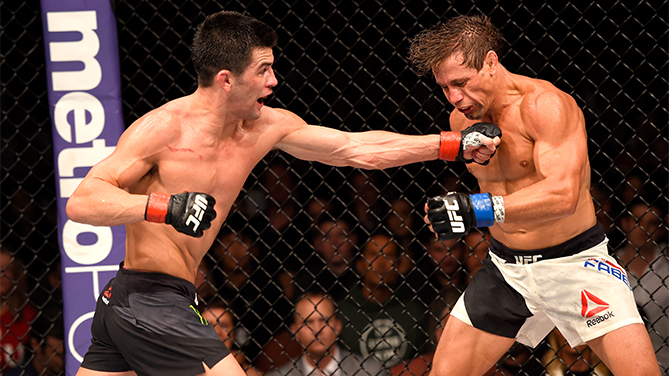 The trilogy between Dominick Cruz and Urijah Faber didn’t end with a bang, but a master class, as Cruz retained his UFC bantamweight title Saturday with a lopsided five-round unanimous decision in the UFC 199 co-main event at The Forum in Inglewood, California.

“He’s tough, but I’m not surprised,” Cruz said. “He was a champion before, and with being a champion comes toughness. Everybody in this Octagon is tough, so I’m ready for five rounds any time.”

“He had a perfect fight, so I can’t say anything,” Faber said. “Congrats to Cruz, what a performance.”

San Diego’s Cruz got the fight to the mat early in the first round, Faber staying busy in an attempt to escape, and in the second minute he did, rising to his feet as Cruz remained locked on. Moments later, the two separated but locked right back up, Faber slamming Cruz to the mat. But in the ensuing scramble, it was Cruz getting the top position before the two rose. Cruz began landing with some punches in the final minute, possibly sealing the round for him.

In the opening minute of round two, Cruz landed a hard left that put Faber on the deck, and when “The California Kid” rose, he was still wobbly. Cruz kept his foot off the gas though, allowing Faber to get his legs back and make it through a slower-paced round.

The two picked things up in round three, each tagging the other with hard shots in the early going, and Cruz, who appeared to be tiring in round two, was back in his stick and move rhythm, landing with quick shots and being gone before Faber could find him.

In the fourth, Cruz scored his second knockdown of Faber, and though he didn’t finish the challenger, he was clearly in control as the bout entered its closing stages, and while Faber tried to make a run at a miracle finish, his aggression played into the champion’s hand, as he logged another round and the win.