“My first professional fight was against a guy who had 20 pro MMA fights. I’ve never taken the easy route, I’ve always pushed to fight the best, and that’s how I make my name, taking on anyone, anywhere.”
By Philip Ferraro • Feb. 7, 2019

Jimmy Crute has grown up quickly in his fighting career…by choice.

The 22-year-old light heavyweight, who fights Sam Alvey this Saturday (Sunday Australian time) on the main card of UFC 234: Whittaker vs Gastelum, says he has always taken the path of most resistance.

“I’m not here to pad my record out or take the easy route. I could sit here and take the easier fights, build my record up and get more experience, but I’ve never been about that,” said Crute ahead of his fight at Melbourne’s Rod Laver Arena.  “My first professional fight was against a guy who had 20 pro MMA fights. I’ve never taken the easy route, I’ve always pushed to fight the best, and that’s how I make my name, taking on anyone, anywhere.”

When a young, undefeated fighter makes noise in the UFC, often the big unknown is how they will deal with adversity. But that’s not the case for the 9-0 Crute, who earned his UFC contract with a first-round TKO victory over Chris Birchler on Dana White’s Tuesday Night Contender Series. He says he has already had his resolve tested and passed with flying colors.

“I’ve gone 25 minutes through bloodbaths and never once crumbled. One of my fights against one of the best guys I’ve ever fought (Steven Warby), I broke my ribs two weeks before the fight and ended up in hospital a day after the fight with a blood infection that I’d been fighting off, and I went 25 minutes with one of the best guys in the region.” 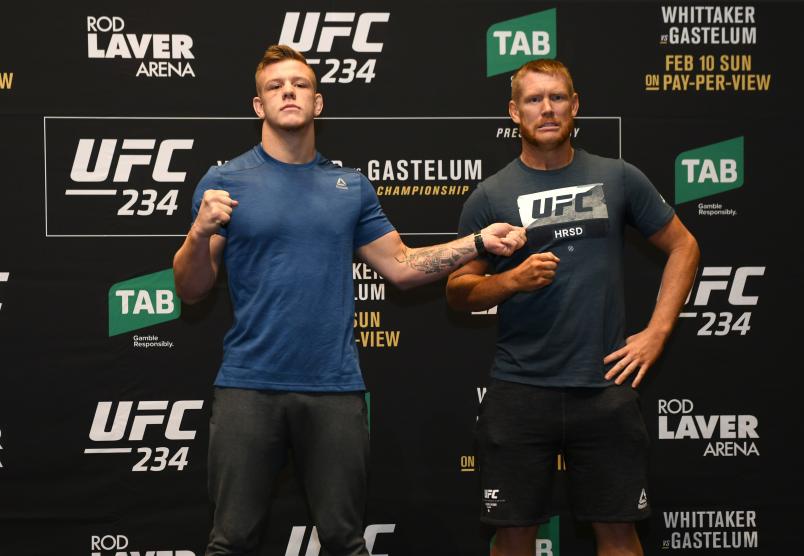 The full story of Crute’s journey to the UFC, beyond his fights on the Australian regional circuit, is also proof of his durability. He first set his sights on making the UFC at age 11.  Crute had already begun training in Brazilian Jiu-Jitsu, but didn’t know of the UFC’s existence until just after UFC 70 in April 2007.

“I remember (after training) getting changed and all the boys were talking about the UFC event that had just been on (over) the weekend and I was like ‘what the hell is that;’ I thought professional wrestling was what fighting was,” said Crute. “I went home and looked it up that night, and as soon as I saw it, it was the Gabriel Gonzaga head kick over Mirko Cro Cop, and I decided ‘that is exactly what I want to do with my life.’”

Crute, who worked full-time as a forklift driver until his UFC debut, says it’s been a constant grind from then on.  While his parents supported his ambitions - Crute comes from a long line of boxers on both his mother and father’s side - he’s still had to pay his own way.

“People don’t see the hard work and the struggle it takes to get to the UFC; there’s probably been points where most people would’ve given up, not any moment, just the constant grind, (bad days), having to decide whether you’re going to put money into fuel to get to training or to eat that night. It’s a very challenging rise, but if I didn’t go through that I wouldn’t  appreciate where I am now.”

Crute’s grit was on display in his UFC debut against Scotland’s Paul Craig at UFC Fight Night 142 in December 2018. After a back and forth contest, Crute latched on to a kimura for a submission victory over his fellow Brazilian Jiu-Jitsu brown belt at 4:51 of the third round.

While he fought through it, Crute does admit to being overawed by the UFC atmosphere.

“I put so much pressure on myself to block out the crowd and focus in, but when there’s that many people cheering you cannot block it out, it’s impossible. You have to embrace it, you can’t ignore it, because even if a deaf person walked out there you can still feel the noise, it hits you like a wall.”

Crute has once again asked for the toughest challenge on offer in the 32-year-old Alvey.

Crute was originally slated to fight Ryan Spann. Spann, like Crute, has just one UFC fight to his name, but following Spann’s withdrawal due to injury, Crute opted for a fight with the vastly more experienced Alvey (33-11, 1 NC in MMA).

The word “experienced” is sometimes a euphemism for “old and not particularly dangerous.” Not so for KO puncher Alvey, who, with a 10-6 UFC record, holds wins over the likes of Cezar Ferreira, Nate Marquardt and former UFC light heavyweight champion Rashad Evans.

On paper, it may seem very early for Crute to be taking on the likes of Alvey. But the Bendigo, Victoria product does not think it’s premature.

“In my view, Sam Alvey poses the same threats as Ryan Spann. Any light heavyweight can crack hard, anyone can pose a threat.  There may be a bit more danger with Sam Alvey just because of how hard he hits and his experience, but the reward in beating Sam Alvey is far higher than beating Ryan Spann.”

While Crute is battle tested, he also has five first-round finishes to his name. He thinks there’s a good chance Alvey will become number six come Saturday.