Crusher Too Much for Siver in Berlin Co-Main 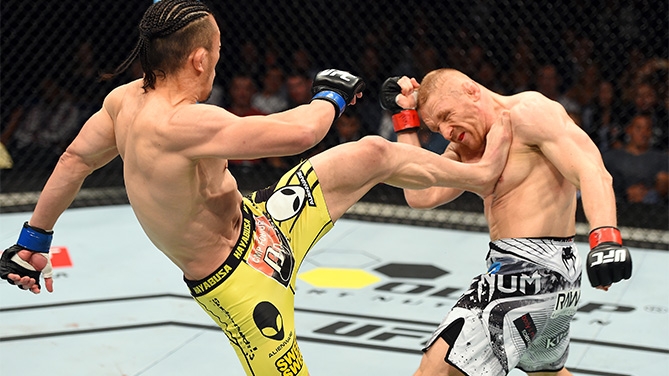 “I feel so good," Kawajiri said. "I knew I was going to have to win the hard way; there is no easy way in the UFC so I always knew it was going to be a tough fight. I want to fight top five opponents – I’m ready for that."

Kawajiri mixed it up nicely with a series of unorthodox techniques as the bout opened, missing most but certainly getting Siver’s attention before attempting a takedown that came up empty. As the round progressed, Siver landed hard shots at various moments while using remarkable balance to keep Kawajiri’s takedown attempts from succeeding until the final seconds of the round.

The cat and mouse game continued into round two, but Kawajiri was able to get the takedown just before the midway point of the stanza, allowing him to work at the range he wanted to. Siver wasn’t giving up anything easy, but Kawajiri’s pressure was smothering, and with less than a minute left, the Ibaraki product briefly got the mount position before Siver got free briefly in a late-round scramble.

It was a return trip to the mat early in the final frame, yet Siver was able to move back to his feet quickly. The Japanese veteran kept pressuring for the takedown though, and despite the threat of a guillotine from Siver, Kawajiri got it once more and kept the bout grounded until the final horn. 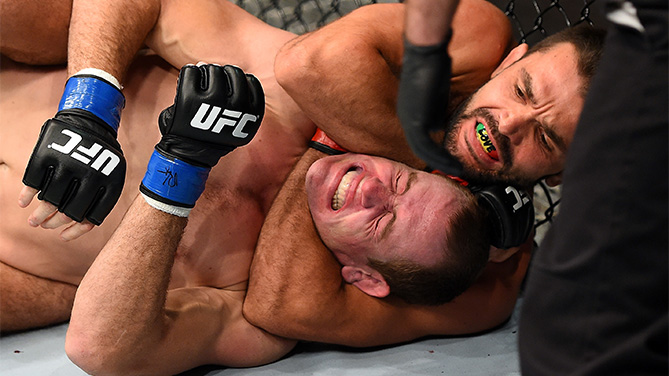 In May of 2014, Germany’s Peter Sobotta earned his first UFC win; Saturday in Berlin, he picked up his first UFC finish, submitting late replacement foe Steve Kennedy in the first round.

Sobotta came out aggressively at the start, landing some hard strikes before the fight went to the mat. Kennedy fought well and got loose from the canvas, but Sobotta reversed position and went to work, taking his foe’s back and then sinking in the rear naked choke that ended matters at the 2:57 mark.

With the win, Balingen’s Sobotta moves to 15-4-1; Australia-based Brit Kennedy, who replaced the injured Sergio Moraes, falls to 22-7.

“I had good momentum in the stand-up and I just had the feeling that I could take him down, so I did it and then he scrambled out but I got his back,” Sobotta said. “The first time I couldn’t finish it, so I improved my position and the second time I got it. It’s a great feeling to fight here. Next, I want to fight Sergio Moraes – I don’t care where, I will fight him anywhere." 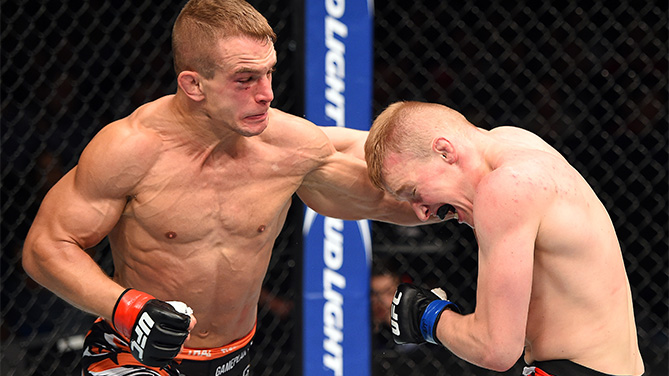 The opening round was fought at a measure pace, neither fighter kicking it into the next gear despite both having their moments over the first five minutes.

A fight broke out in the opening minute of round two, Sajewski stalking and throwing hard shots at his foe while Hein fired back with heavy-handed blows. The action was far from sustained throughout the frame though, leaving the fight still up for grabs in the final round.

In the last frame though, Hein took his attack to the next level, sticking and moving without restraint as he sealed the fight in his favor.

“It feels just awesome,” Hein said. “Today I had great feelings and great joy. I am really calm now and also very satisfied. The game plan was always to be on the move, to never stand still or to be an easy target. I was mobile, and that’s the medicine that worked for me tonight."