Crowder's Best Yet To Come

“I’ve been working on my striking a lot since the Greg Hardy fight. I’ve actually gained like 10 or 15 pounds since then. My conditioning is better. I’m feeling really good right now and I want to go and get that highlight reel knockout."
By Damon Martin • Jun. 18, 2019

Allen Crowder knows through his first two fights inside the Octagon that the UFC hasn’t seen him at his very best.

The 29-year old North Carolina native earned his contract with the UFC following a rousing third round TKO over Don’Tale Mayes on Dana White’s Tuesday Night Contender Series in 2017. Unfortunately, Crowder came up short in his UFC debut when he was toppled by Justin Willis via first-round knockout.

He then returned in January with a high-profile fight against former NFL defensive standout Greg Hardy and Crowder finally started to show some of his potential.

Crowder got the better of Hardy during most of the exchanges, but as the second round got underway, he began running out of steam and what he believed should have been a completely dominant performance soon became a competitive fight. Unfortunately, the fight ended after Hardy unleashed an illegal knee strike that ended Crowder’s night.

“I took that fight [against Greg Hardy], I had just got over a knee injury and I took that fight on about six weeks’ notice so I wasn’t in the best of shape,” Crowder explained. “My cardio was definitely better than his.

“Going into the second round, I should have got my hips in a little bit tighter, a little bit closer when I was going for the takedown. Once I got the fight down to the ground, I would have finished the fight there. Little mistakes, little details I needed to improve on.”

He got the win but it definitely wasn’t the way Crowder wanted to earn his first UFC victory, which is why he’s more motivated than ever before as he prepares to return to action this weekend at UFC Fight Night from Greenville, South Carolina.

Ideally, Crowder would have returned sooner just to wash the bad taste of that last performance from his mouth, but the timing actually ended up benefitting him. Crowder was able to get some work in with new coaches while also traveling a bit before settling back down to prepare to fight in front of an almost home audience with his North Carolina home just a few hours away.

“I wanted to fight a little sooner but things were adding up and then I ended up getting a new coach to help out with my other two coaches and they wanted to work on some things,” Crowder stated. “Just trying to improve upon a few things and then we ended up getting the South Carolina fight, which I’m excited about.

“It’s close to my hometown. I’m only like three hours away from my hometown so I’ve got a lot of friends and supporters coming out to cheer me on so I’m really excited about that. I would have liked to fight sooner but I’m happy with the way it all worked out.” 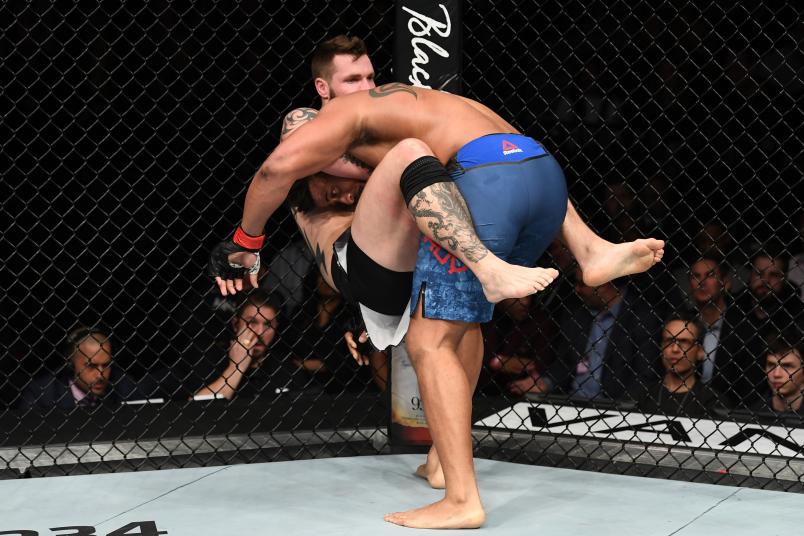 To get what he will consider his first real win in the UFC, Crowder will have to hand undefeated heavyweight prospect Jairzinho Rozenstruik the first loss of his career.

Rozenstruik made his debut in February, when he finished Junior Albini with a second round knockout to bring his record to 7-0 overall. As impressive as that finish may have been, Crowder knows that anybody in the heavyweight division is capable of that kind of knockout with a single punch compounded by a bad mistake.

“Any man over 230 pounds, if they touch your face you’re going to go to sleep,” Crowder said. “You can’t make no mistakes. If you make one little mistake, one little slip up, I mean take that Derrick Lewis fight with [Alexander] Volkov — Volkov was winning that fight all three rounds, the last 10 seconds Derrick Lewis knocked him out. It don’t take nothing but that one mistake and it will ruin your whole night.

“He’s got some heavy hands. I look forward to this fight. A win over this guy is going to push me closer to getting a fight against somebody in the top 10 and help me solidify my spot here in the UFC.”

As dangerous as Rozenstruik may be on the feet, Crowder sees glaring weaknesses in other aspects of his game and that’s where he plans to take advantage.

“I’m definitely better on the ground than he is. I didn’t see any kind of ground game,” Crowder said. “My end goal is I want to knock him out. I also feel like my striking is better. I’m setting out to prove that.

“I’ve been working on my striking a lot since the Greg Hardy fight. I’ve actually gained like 10 or 15 pounds since then. My conditioning is better. I’m feeling really good right now and I want to go and get that highlight reel knockout, get that $50,000 bonus and take my family on a good vacation.”

If all goes well on Saturday night, Crowder would love to take that vacation with his family and then return in hopes that he can finally settle the score with Hardy once and for all.
He doesn’t hold any ill will towards him for the way the first fight ended, but he still didn’t feel satisfied when it was over and that needs to be rectified.

“I’d love to run it back again,” Crowder said about Hardy. “His name, that would probably be a main event fight if we get that one lined back up. So I hope we get to do it again. I plan on finishing this guy right here off and he (Hardy) has got one lined up [in July] and I hope he wins that one and we can run it back again.”