Crowder believes fighting for the fans is most important

The usual reaction to getting a UFC contract after a win on the first season of Dana White’s Tuesday Night Contender Series was to enjoy the moment and just wait on the next call from the promotion for a trip to the Octagon.

Heavyweight Allen Crowder was more specific when it came to his future plans in the UFC after his Aug. 29 victory over Don’Tale Mayes, as he called out for a rematch with No. 13-ranked contender Curtis Blaydes

“Any time you lose, you always feel like you could do better, and at that point in time in life I was doing the wrong things and he got the better of me that day,” Crowder said of his 2015 loss to “Razor” Blaydes. “I definitely would love to see a rematch in the future. I know he’s up there now, he’s a very skilled athlete, obviously, so I know I’m gonna have to work my way up, but I definitely would love to have a rematch with him and it’s something I’m pushing for in the future.”

As the saying goes, “Fortune favors the bold,” and a prospect doesn’t get bolder than that. And while some may scoff at Crowder’s desire to even the score with Blaydes, most will hear that statement and say, “I want to watch that kid fight again.”

UFC fans will get that chance, and it’s also a fresh start for the 27-year-old native of North Carolina, who would lose his first fight after the Blaydes bout and then begin the process to change his life and begin his march to the big show.

“That whole year (2015) I was off-balance,” he said. “I was a single guy doing the wrong things. I was out partying and not taking my career seriously like I should have been doing. Right after I lost that second fight is when I changed it around.”

The reason was simple – he wanted to make as much as he could of his athletic window before it closed. But he also met some key folks along the way that helped the process, including his current coaches and his wife.

“I don’t have many years left to do this, and I don’t want to look back and think, ‘Man, I wish I had done these things,’” he said. “So I put the partying to the side. Shortly after that, I met two of my coaches, Eric Jeffries and Jesse Rey, and they’ve put a tremendous amount of work into me. Probably a month after that, I met my wife. We wound up getting married in August of the following year, and I stood on track ever since.”

Three wins followed the only two losses on his 9-2, 1 NC record, including a January bout with Chase Gamble that resulted in a slam-induced knockout that went viral.

“Gamble took that fight on a day’s notice and I respect him for doing it,” Crowder said. “But it definitely got my following up more and it put me on the map.”

Those victories gave him confidence that a UFC call would soon come, but he figured it would take a couple more wins to secure it. Then DWTNCS showed up. 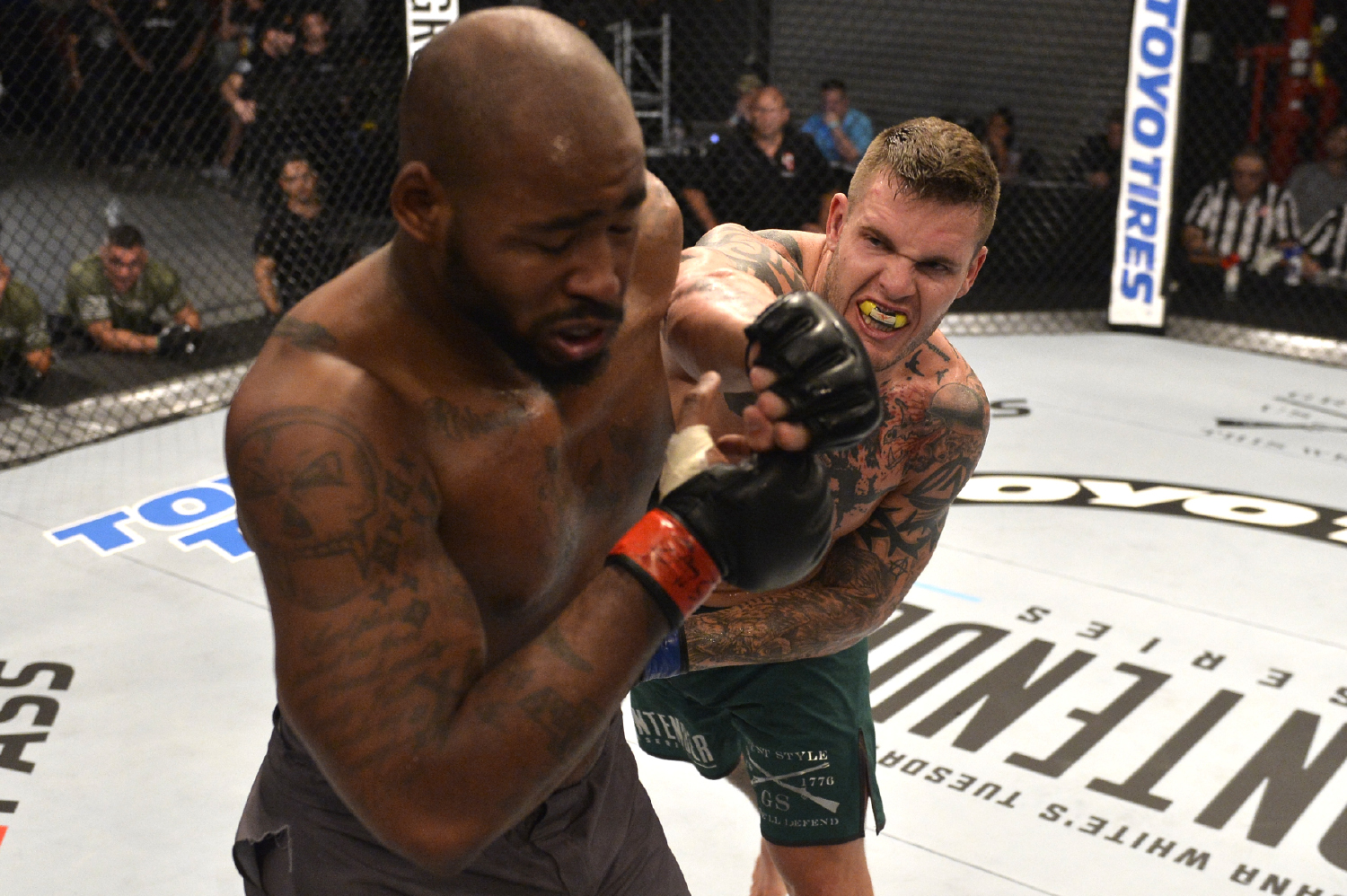 “I knew I was gonna get there,” he said. “I figured after those two losses on my record, I know that hurt me bad, so I knew if I got two more wins, they’re gonna have to give me a shot. Then I got the phone call to fight on the show and I thought that this might be my way in, so I was ecstatic to have the fight, and after winning, it was just like a whole other level. It was very humbling.”

Crowder’s third-round TKO of Mayes earned him a nod as one of three fighters picking up contracts that night, but none has the opportunity to jump right into fray quite like the Mebane product, who enters a division in need of new blood.

“There are some great heavyweights fighting right now, but the fact is that there’s not that many of them,” he said. “You take the 185-pound weight class and you’ve got 50 guys and any one of them can be the champion at any time. In my weight class, there’s a select few and it definitely helps out me being a very good looking guy, I can definitely sell some tickets.”

He laughs when I also point out his modesty, but in all seriousness, Crowder gets it and knows that the way to appeal to the mainstream is to get the fans on his side.

The fans are the most important, that’s who we’re out there fighting for

“The fans are the most important, that’s who we’re out there fighting for,” he said. “Without them, we’re beating each other up for no reason. You want to have a good fan base, you want people following you, and you’re gonna have people that love you and people that hate you, but either way, they’re gonna be watching to see you win or lose.”

And while Crowder wouldn’t mind getting down to business immediately with a top 15 contender like Blaydes, he’s willing to take his time as well.

“I’ve definitely got some things to work on, and that’s the best thing about this game, that there’s always something to improve on. My plan is to get better every day and just take it from there, one step at a time.”