"Challenges in my life keep me inspired. I
started training at eight years old.  It is all I know and it has given
me a rich and happy life." - Cristiano Marcello 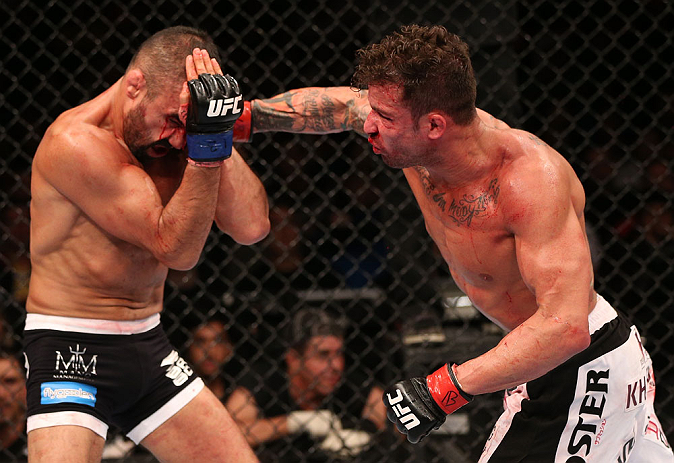 You’ve heard the stories about the heyday of the Chute Boxe Academy in Curitiba. They’ve almost become mythical at this point, tales of sparring sessions that you could have put on Pay-Per-View they were so good, the idea that as hard as you went at each other in the gym, when you stepped through the doors, you had a family who had your back.

The Axe Murderer. Shogun. Ninja. The Spider. Cordeiro. Pele. And there through it all was Cristiano Marcello, not just a fighting member of the team, but its grappling coach. And Marcello says the Chute Boxe stories were not tall tales.

“Let me put it this way,” he said, “with no exaggeration, we had probably five or six real fights every day in training back in those days.  The sessions were very intense because each fighter wanted to show their potential to fight and participate in the big shows.  But there were not that many big shows at the time, only UFC and PRIDE, so you really had to show your potential, if you know what I mean.”

Marcello laughs, and while you could say that, at 35, he’s mellowed, the intensity is still there – to fight, to compete, and to win. That will likely never change because it’s in his blood.

“Challenges in my life keep me inspired,” said the UFC lightweight. “I started training at eight years old.  It is all I know and it has given me a rich and happy life.  I really can't see myself doing something else.  And as long as the challenges are there, I will be there to face them with a smile.  As long as I can continue to compete competitively with my athletes at CM System, and I continue to evolve technically as a fighter, I don't see myself walking away from competition.”

That’s the difference between fighters and the rest of us. There really is no end game for a fighter if he proves he can still perform when his name is called. Look at Bernard Hopkins in boxing. Why should he retire at 49, especially since no one has been able to outclass him and show him that he doesn’t belong? That’s where Marcello stands today, in the top organization in the world and eager to still show that he’s not going anywhere.

“It has been a great experience,” he said of his time in the UFC, where he made his debut in 2012 after his stint on The Ultimate Fighter 15. “I feel like it is a dream come true to have fought in PRIDE, TUF, and also the UFC. I have done and seen a lot, and I plan to retire in the UFC, but this will not be the last chapter of my story.  I want to fight in the UFC for many more years to come.  After that, I plan to pass the torch and prepare many fighters from my academy, CM System, to enter the UFC and fight after I have retired.”

For the time being though, it’s Marcello’s time, and a week from today on February 15, he will be back in the Octagon as he battles a familiar face in his former TUF teammate Joe Proctor.

“He is a skilled guy and is well-rounded,” said Marcello of the man he will meet at UFC Fight Night in Jaragua  do Sul. “Every fighter in the UFC is a potential opponent and I trained very hard.  We both know each other's games because we trained a lot together, but I think this helped me because it forced me to change some things in my game in order to surprise him in the fight.  Therefore, I feel like I evolved as a fighter in this training, and I plan to use some very nice new tricks in this upcoming fight.”

Preparing to fight someone you’re friendly with, as well as a former training partner, isn’t just a reason to switch some things around technically; for someone raised in the Chute Boxe Academy, it forces a change in philosophy as well, one Marcello has adjusted to over the years.

“I come from the old school where we would only fought our rivals and enemies,” he admits. “But the times are changing and the athletes need to change with the times.  I have fought friends a few times now in my career.  I feel that it can be a special thing to fight and then you can have a drink with your opponent after the event.  This will be different than the fight that I had with Reza Madadi (at UFC 153), where we had a bitter rivalry.  By the way, he and I respected each other a lot after the fight and we needed a proper battle to become friends.  Proctor is a good friend, we will make an exciting fight, and we will give it everything we got.  Afterwards it will make our friendship stronger.”

Those friendships mean a lot to Rio de Janeiro native Marcello, and it seems that it’s a common thread among those who competed on TUF 15, the only live version of the show and one that forced its participants to spend 13 weeks in the house together, as opposed to the usual six on taped seasons. This did wonders for making the fighters more than just competitors and acquaintances.

“I think the fact that we were in the house for 13 consecutive weeks really created a bond between all of us,” said Marcello. “Even the fighters on the opposite teams became very close with each other.  For example, I fought Sam Sicilia and he was on a different team, but he is also a very close friend of mine.  We train together whenever we can, and he visits my academy sometimes in Brazil to prepare for his fights.  It was a priceless experience we all had together in the house.  I consider all the boys friends for life.”

It’s almost like a mini-Chute Boxe for the new generation, and Marcello believes that with his new team, the same type of unit can rise as well in the future.

“Give me five more years for CM System,” he said of his academy in Curitiba. “We have the same spirit, but with the modern technical evolution that is happening in the best academies in the world.”

Crossing the bridge between the old school and the new breed, Cristiano Marcello has a unique place in the MMA world. But he feels that this story isn’t over yet.

“I don't just come to win when I fight,” he said. “I always want to finish fights and make for exciting battles in the cage.  I am always fighting to win KO, Submission, or Fight of the Night.  It does not always happen, but that is my goal every time I step in the Octagon. My goal for the year is to continue my evolution as a fighter, enjoy the experience of being in the UFC, and to continue to fight with the best the sport has to offer.”