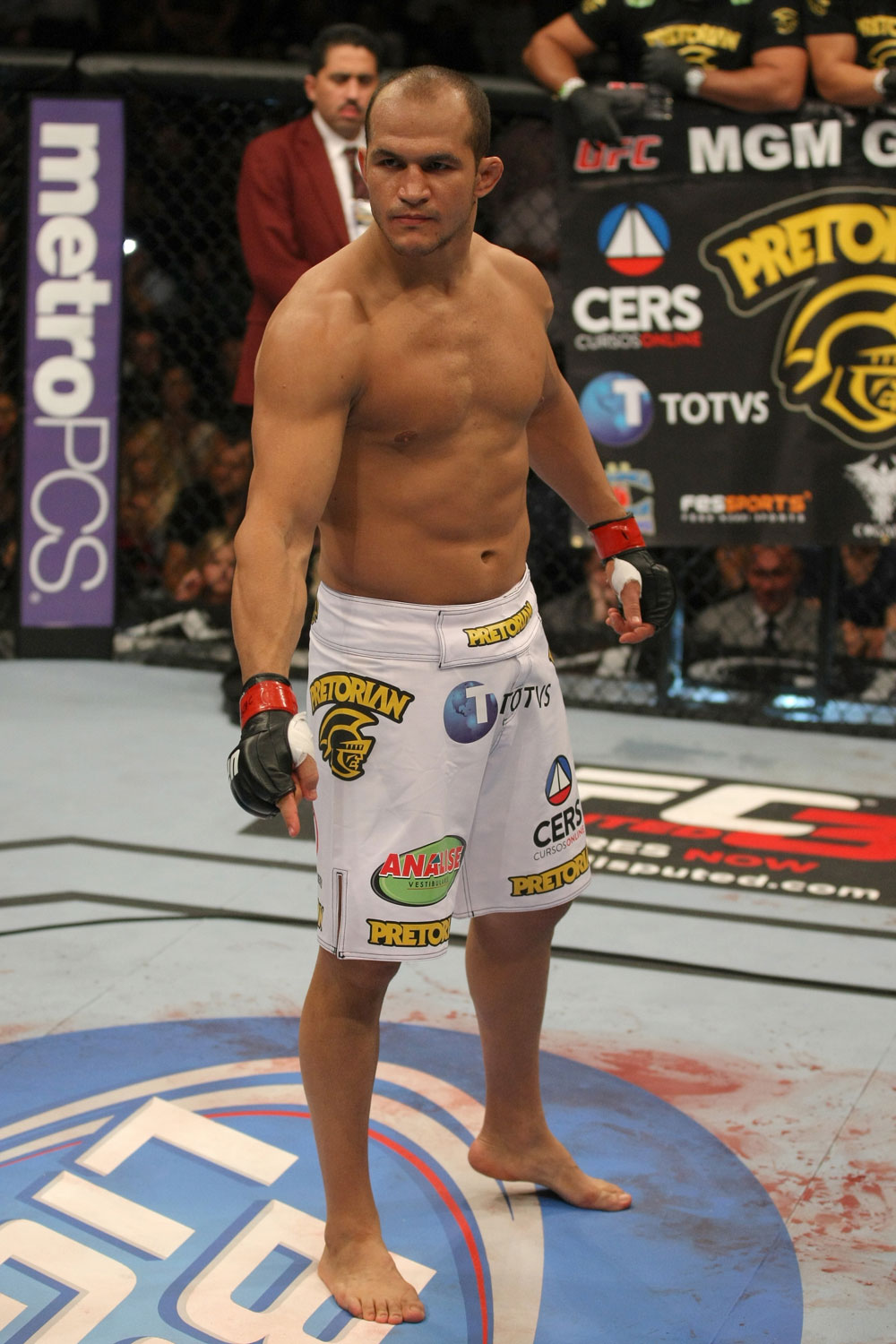 Unbeaten in nine UFC bouts, Junior dos Santos will defend his UFC heavyweight title against the man he took the belt from, Cain Velasquez, in the main event of UFC 155 on December 29th in Las Vegas. So how did he get here? Read on to find out.

UFC 90 - TKO 1 Fabricio Werdum
The lasting image of Junior dos Santos’ first week in the UFC (well, in addition to the highlight reel knockout) may have been the clip from UFC President Dana White’s video blog where he showed off the Brazilian newcomer hitting pads before his debut bout against former PRIDE star and then-UFC contender Fabricio Werdum. White couldn’t be more impressed with “Cigano,” and then dos Santos delivered in the Octagon with a blistering right uppercut that put his countryman down on the canvas face first. The fight took only 80 seconds, and a star was born.

UFC 103 - Wsub3 Mirko Cro Cop
Despite what the internet may say, among pro fighters, especially those who are about to fight him, former PRIDE star Mirko Cro Cop always commanded a significant amount of respect, and dos Santos counted himself among those not counting him out of any bout held inside the Octagon. That respect didn’t carry into their 2009 bout in Dallas though, and dos Santos made it three in a row in the UFC (he had taken just 54 seconds to beat Stefan Struve in his second bout at UFC 95) with a third round finish of Cro Cop that ended when he broke the Croatian’s orbital bone and forced a verbal submission. Yeah, this dos Santos kid was scary.

UFC LIVE - TKO1 Gabriel Gonzaga
Winner of three of his previous four bouts, Gabriel Gonzaga was approaching the form that got him a world title shot in 2007 when he agreed to face “Cigano” in a March 2010 fight in Colorado. And with this being an All-Brazil showdown, there was even more on the line for both fighters. But dos Santos was frightening once again, taking less than four minutes to finish his opponent. It was time for a move up, and he was ready for it.

UFC 117 - W3 Roy Nelson
Known for his ground game, Roy Nelson added “knockout puncher” to his resume after his appearance on season 10 of The Ultimate Fighter, taking out Brendan Schaub and Stefan Struve in brutally efficient fashion. And to his credit, “Big Country” didn’t shy away from standup exchanges with dos Santos at UFC 117, but he paid for each one, as the Brazilian pounded away for three one-sided rounds en route to a unanimous decision victory.

UFC 131 - W3 Shane Carwin
After the Nelson bout, dos Santos was introduced to an entirely new audience as a coach on season 13 of The Ultimate Fighter, and new fans immediately gravitated to him thanks to his affable personality and ever present smile. The prize at the end of the six weeks of taping was going to be a UFC 131 bout with Brock Lesnar, but another bout with diverticulitis took Lesnar out of the bout. In stepped heavy-handed former interim champ Shane Carwin, but what was expected to be an explosive encounter that wouldn’t get out of the first round instead turned into a bloody and one-sided decision win for dos Santos, who left no doubt as to who the number one contender in the heavyweight division was.

UFC on FOX 1 – KO1 Cain Velasquez
Placed in one of the most important events in UFC history, the organization’s debut on the FOX network, the pressure was on for dos Santos and his opponent, Cain Velasquez, to deliver an epic and explosive performance fitting of a world heavyweight championship fight. And it certainly was explosive, though dos Santos made sure it wasn’t epic thanks to the right hand that sent Velasquez crashing to the mat, ending the bout in just 64 seconds. A new champion was born that night in Southern California, and his name was Junior dos Santos.

UFC 146 – TKO2 Frank Mir
Dos Santos expected to take on Alistair Overeem in May of 2012, but licensing issues kept “The Reem” from making the trip to Las Vegas. In stepped local hero and two-time heavyweight boss Frank Mir, but despite having a vastly different style than Overeem, dos Santos adjusted seamlessly, keeping the bout standing until he ended it via knockout in the second round. The first title defense out of the way, JDS will meet Velasquez again on December 29th in the main event of UFC 155.