The Crafty And Treacherous Carlos Condit

The 37-Year-Old UFC Welterweight Plans On Unleashing A Few Trick To His UFC 264 Bout With Max Griffin.
By E. SPENCER KYTE, ON TWITTER @SPENCERKYT • Jul. 7, 2021

As Carlos Condit readies to step into the Octagon on Saturday night opposite Max Griffin in the final preliminary card fight of the evening, he does so on a two-fight winning streak and is once again enjoying the process.

It will be his third fight in 10 months, a far cry from the nearly two years that passed between his loss to Michael Chiesa at UFC 232 and his return to the win column against Court McGee last October on UFC Fight Island, and more than five years removed from the night that the career of “The Natural Born Killer” began to take a turn for the worse.

“The fight against Robbie Lawler took a lot out of me,” explained Condit in his familiar hushed tone and start-stop delivery. “That one was this pinnacle in my career — fighting for the undisputed welterweight title — and I thought I had a really great performance and it didn’t go my way by the skin of my teeth.”

The duo met in the main event of UFC 195, the first pay-per-view of 2016 — Lawler entering as the undisputed welterweight champion, six months removed from his hellacious clash with Rory MacDonald at UFC 189, while Condit was the battle-tested challenger, a former interim champ and respected veteran coming off a vintage showing against Thiago Alves. 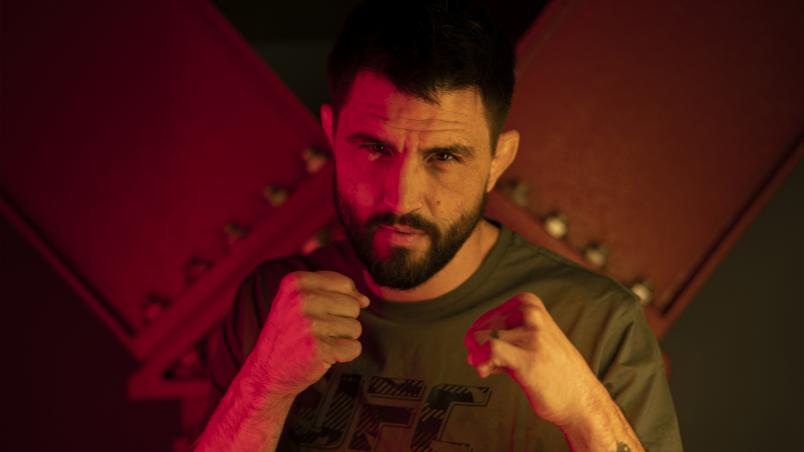 Tensions rose with every exchange, each round presenting at least one shift in momentum, though often more.

Observers only needed the edge of their seats, if they managed to stay standing, and after 25 grueling, punishing minutes, the final horn sounded, the crowd inside the MGM Grand Garden Arena erupted and Condit, along with innumerable others, believed he’d toppled the sitting champion.

Online scores skewed heavily in favor of the former WEC champion from Albuquerque who had spent the last seven years facing only the best the UFC welterweight division had to offer.

MORE UFC 264: Fight by Fight Preview | Tai Tuivasa Is Back On A Roll | Sean O'Malley Manifested This Moment | Significant Stat Preview | Fighters On The Rise

Judge Tony Weeks agreed, scoring the bout 48-47 for Condit, but the other two officials, Derek Cleary and Chris Lee, thought otherwise, their tens and nines adding up to the same 48-47 totals but in favor of Lawler.

Instead of hearing “And New!” Condit and everyone else heard “And Still!” and the challenge came away from the encounter a broken man.

“Mentally, physically, emotionally, it broke me for a while and I spiraled out,” offered Condit. “I spiraled out in my personal life, went through a bunch of s*** there, and it took me a while to recover.”

In addition to going through a divorce, the veteran lost each of his next four appearances; a narrow, debated defeat in a classic championship fight becoming the catalyst to an extended skid that left the steely, tenacious competitor contemplating retirement on more than one occasion.

“After those losses, I would leave all my gear in the hotel and say, ‘I’m not fighting again,’” recalled Condit, who followed up his victory over McGee with a similar unanimous decision result against Matt Brown in January; the first time he’d won consecutive fights since earning victories over Dong Hyun Kim and Nick Diaz UFC 132 and UFC 143, respectively. “I’d leave my gloves, my shin guards that I brought with me and I would just say, ‘F*** it; I’m done! I don’t want to do this any more! I’m over this. I don’t have it any more.’

“That dejected feeling of failure from losing a fight sucks.”

In between losing to Chiesa at the end of 2018 and last year’s return to the win column on UFC Fight Island, Condit never stopped training and never really lost faith, despite the frustrated reactions and leaving of equipment in hotel rooms that followed some of those setbacks.

An eye injury prolonged his hiatus, but as the bout with McGee neared, he felt good, enjoying the process of preparing to step into battle and how different it felt from when things in his personal and professional life were unsettled.

“The couple years before that were really tough just as far as not being all-in,” began Condit, who used that phrasing — all-in — multiple times to describe his state of mind and approach to his last two outings and his impending clash with Griffin on Saturday.

“In that two years off, I maintained a lot of optimism; I was training that whole time, and by that point, I feel like I was already kind of through the fog and it was just having to deal with the injuries and whatnot. 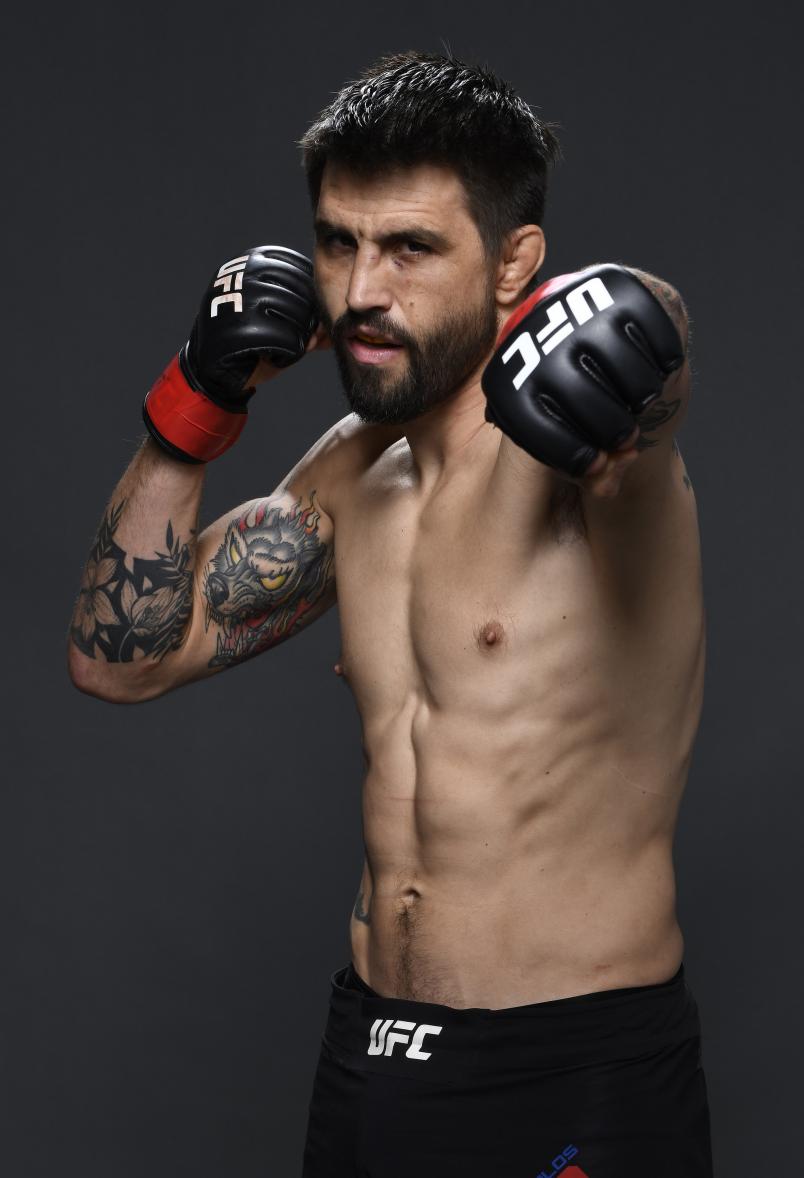 Carlos Condit poses for a portrait after his victory during the UFC Fight Night event at Etihad Arena on UFC Fight Island on January 17, 2021 in Abu Dhabi, United Arab Emirates. (Photo by Mike Roach/Zuffa LLC)

“Now I’m back to just enjoying the process. I’m happy to be here and being all-in feels really good.”

Entering on a two-fight winning streak of his own, Griffin has spoken openly about being a fan of Condit’s — watching him as a fresh-faced champion in the WEC, pacing back and forth, a menacing scowl on his face as he readied to square off with Brock Larson or Carlo Prater or Hiromitsu Miura — and how he knew back then that “The Natural Born Killer” was someone he wanted to face during the course of his career.

It’s an experience Condit has been through multiple times in the past and one that he believes is commonplace throughout the sport.

“I’ve had that similar sentiment quite a few times standing across the cage from guys that I’ve idolized and it’s always surreal,” the welterweight stalwart began. “The first instance of that happening is when I fought Frank Trigg.

“I was watching Frank Trigg fight for the title, watched his rise in the UFC, and then when I was 21, I got to fight him. Standing across the cage from him was a trip.

“There have been a number of guys, but most notably Georges St-Pierre,” he added. “The guy is like a God, right? He’s a God in the fight world and so standing across from him, I needed to pinch myself to wake up.” 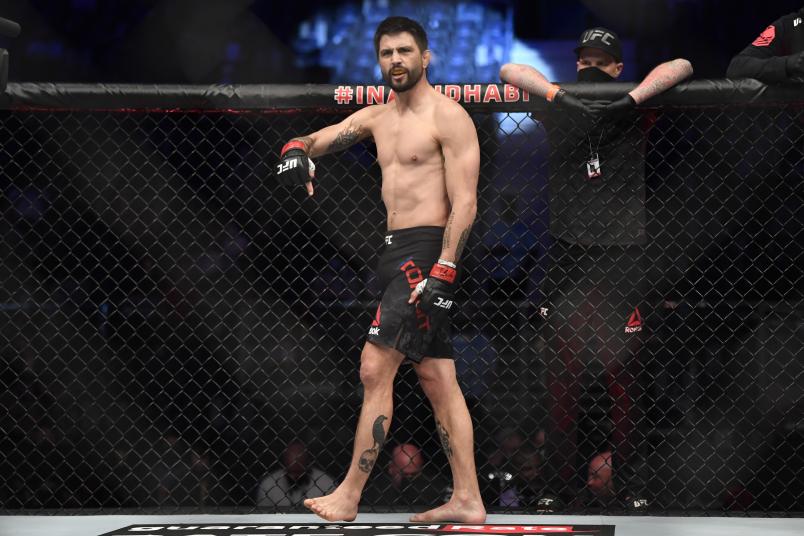 Whether Griffin will need to pinch himself before things get underway is unknown, but what is for certain is that Condit knows he’s in a serious fight on Saturday night, and he’s eager to put his years of experience to good use to keep his winning streak going.

“Max is a helluva opponent — he’s a skilled fighter, he’s dangerous, and he comes with it,” he said of the NorCal native, who has earned consecutive stoppage wins heading into their highly anticipated clash this weekend. “He’s got a lot of belief in himself and he’s got momentum, too, so I think he’s coming forward and I think he’s going to come with it.

“He’s bringing the fight, but I’ve got a few tricks up my sleeve,” Condit added with a snicker. “I’m a smart fighter, and what I maybe don’t have in youth, I can make up for in treachery and craftiness.”