Cowboy Rides Off with Win over Merritt 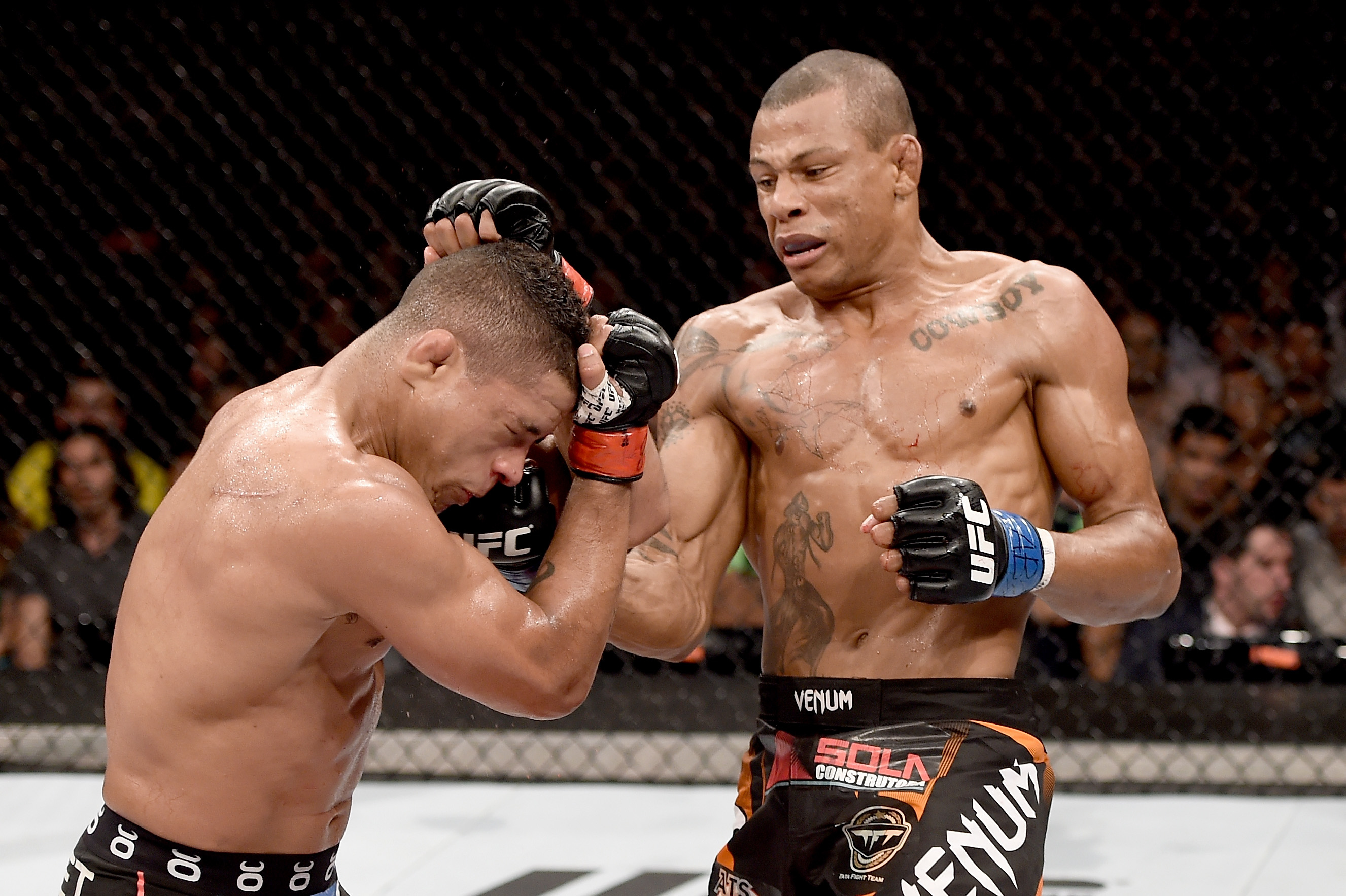 Brazilian prospect Alex Oliveira wasn’t able to finish off Octagon debutant Joe Merritt in UFC Fight Night prelim action on Saturday, but in their welterweight bout at the Seminole Hard Rock Hotel and Casino in Hollywood, Florida, it was “Cowboy” picking up his second victory in a month, this time via unanimous decision.

Scores were 30-27 across the board. Oliveira, who normally competes at lightweight, but who stepped up for this bout on short notice after visa issues forced 12 fighters off the card, was coming off a May 30 submission of KJ Noons.

"I fought in this division before," Oliveira said. "The guys are stronger, but if there's a fight, I'm in."

Engaging immediately, Oliveira bulled Merritt into the fence and sought a takedown, but Merritt refused to allow it until the midway point, when the Brazilian tossed the newcomer to the mat. Oliveira immediately took his foe’s back and looked for the rear naked choke, but Merritt was able to turn his way out of trouble and get in some hard elbows and some stand-up strikes just before the round ended.

Merritt eluded some of Oliveira’s wild rushes as the second round began, but in the second minute he wound up on the canvas again. The American did reverse position, and after rising, he cut Oliveira over the right eye. Oliveira responded by nearly catching Merritt in rear naked chokes – first standing and then on the mat – but the resilient Californian always found a way to survive.

The pattern remained intact in the final five minutes, with Oliveira pressing the action and putting his opponent in bad positions, but Merritt finding a way to escape. Unfortunately, he never got his offense in gear, allowing Oliveira to notch the victory.
With the win, Rio de Janeiro’s Oliveira improves to 12-2-1 with 1 NC; Merritt falls to 7-1.
SILVA vs. GONZALEZ

In a welterweight bout, Brazil’s Leandro Silva moved up a division for the night and picked up a unanimous decision win over newcomer Lewis Gonzalez.

Silva pulled off two takedowns in the opening minute, but Gonzalez’ slick defensive moves allowed him to get back to his feet. Silva was undeterred as he landed with a few hard kicks, prompting Gonzalez to seek his own takedown. Silva remained busy off his back and soon rose. After getting some more kicks off, Silva was grounded once again, but the horn sounded before any damage could be done.

The bout continued to go everywhere in round two, Silva holding the edge standing, on the ground and in the clinch, and even though he threatened with submissions, the game Gonzalez always found a way to see daylight.

The third was close for much of the frame, but a Silva knee with a little over two left jarred Gonzalez and allowed him to look for another submission. The bloodied but unbowed Californian wasn’t having it, and in the final minute, Gonzalez made a final rush, only to be interrupted by a Silva flurry before the horn.

It was a wild sequence that ended the welterweight bout between newcomers Tony Sims and Steve Montgomery, with Sims, fighting at 170 pounds for the short notice bout, as opposed to his usual 155 pounds, winning by first round TKO.

“It's not about the fight itself,” Sims said. “It's about what it took to get me here. Ten years ago, I made a promise to my brother who passed away, and I fought to honor him. This win is the confirmation of my promise. I'm really proud of that.”

The two battled it out on even terms in the early going, but just before the midway point of the round, The Ultimate Fighter 21’s Montgomery landed one of his trademark knees, rocking Sims. The Coloradan shook off the effects of the shot and moments later, he sent Montgomery sprawling to the canvas. “The Creepy Weasel” tried to get up, but he caught another left that put him face first on the deck, bringing in referee James Warring to stop the bout at the 2:43 mark.

Bantamweights Sirwan Kakai and Danny Martinez got the night off to an entertaining start, with American Top Team newcomer Kakai taking a three-round unanimous decision win.

“This victory represents so much for me,” Kakai said. “It's a dream come true. I knew it wouldn't be easy. I've been through a lot and this win just shows me you just have to believe in yourself.”

After a strong start with his stand-up attack, Martinez got put on the mat in the second minute as the Kurdistan native began implementing his grappling game, but the San Diego veteran got up and free quickly. A flush knee dropped Martinez, but he weathered the storm and survived some more hard shots – and threw back plenty of his own - to make it to the end of the round.

Kakai’s grappling and thudding knees kept him a step ahead of his opponent in the second, with Martinez having few answers for the Octagon rookie, who was mixing up his game nicely.

For the first three minutes of the final round, Martinez was in control with his striking once more, but Kakai took the bout back to the mat as the last two minutes arrived. Martinez battled back to his feet, and the two traded hard shots to the horn, garnering an appreciative response from the crowd.

“That's the type of fight I like,” Martinez said. “I came prepared for a war. It was on five days’ notice and I was happy to do it. I'm a veteran and any time you fight for the UFC it's an honor.”