Donald Cerrone’s foray into the welterweight division may turn out to be a permanent one, as he knocked out fellow contender Matt Brown in the third round of their UFC 206 co-main event at Air Canada Centre in Toronto on Saturday, making it four fights, four wins and four finishes at 170 pounds. 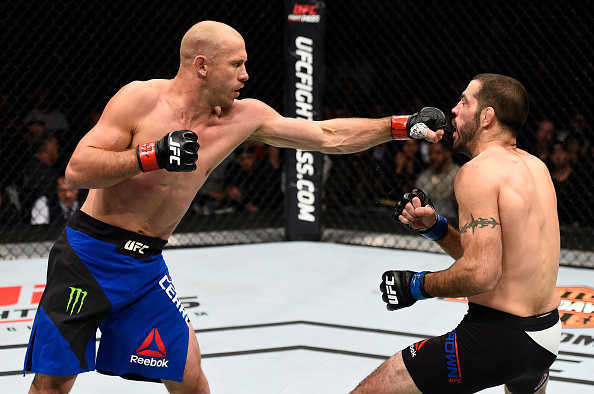 After some heated exchanges to start the bout, Cerrone rocked Brown briefly with a kick to the head, but “The Immortal” shook off the blow and stayed in the pocket, keeping the pressure on “Cowboy.” Just before the three-minute mark, the Cerrone kick to the head hit paydirt again, but Brown kept pressing, even though his face was beginning to show the effects of battle. With a little over a minute to go, Brown missed a kick and fell to the mat, but he almost sunk in a triangle choke from his back. Cerrone escaped, but as the two rose, Brown rallied.

Cerrone looked for a takedown early in round two but got turned away, and 90 seconds in Brown sent “Cowboy” to the canvas. Cerrone rose quickly, but Brown kept moving forward. In response, Cerrone scored a flash knockdown of his own thanks to a kick to the head, and momentum was back in the Denver native’s corner. As the round ticked down, Brown’s entire face was bloodied, and Cerrone was coming on strong. Then Brown returned fire to finish off the round.

The two rivals finally touched gloves to kick off round three, but after a quick takedown from Brown, Cerrone landed his left kick to the head for the last time, dropping Brown hard to the mat and bringing in referee John McCarthy to immediately stop the fight at 34 seconds of the final round.

In a clear Fight of the Year candidate, featherweight veteran Cub Swanson showed that he still has plenty in the tank, as he won a three-round slugfest over South Korean rising star Dooho Choi, whose stock didn’t drop in the slightest by losing his first UFC fight by unanimous decision.

Choi came out fast, landing a right hand and some knees at close range. Swanson settled in soon enough, and the two began exchanging, Swanson scoring well with his overhand right. Midway through the round, the two clinched, with Swanson the busier of the two. Once separated, the fighters took turns getting off hard shots, Swanson bloodying the nose of his foe before the end of the round.

In the second round for the first time in his UFC career, Choi got rocked in the second minute and it looked like he was about to get stopped, but then “The Korean Superboy” roared back and had Swanson on the verge of defeat before the veteran stopped the bleeding with a takedown. After a brief spell on the mat, there were two minutes left on the clock and Choi got tagged with some more hard shots, including a cartwheel kick. Choi took it all and then began firing back, but in the final minute, it was Swanson teeing off with flush punches that wobbled but couldn’t finish Choi.

If the first two rounds weren’t enough, the two combatants continued to leave nothing up to chance in the final five rounds, thrilling the Toronto crowd. Yet despite the back and forth action, it was Swanson who had the better moments, nearly finishing the gutsy Choi in the final minute of the fight.

After being pulled from a UFC 205 fight against Donald Cerrone after missing weight, Kelvin Gastelum gained a measure of redemption at middleweight with an impressive third-round stoppage of Tim Kennedy.

Kennedy got off to a great start, putting Gastelum on the deck twice in the opening two minutes, and even when Gastelum got to his feet, Kennedy kept him locked up while firing off knees to the leg. Gastelum finally got loose with 90 seconds left and landed a couple good shots, raising a mouse under Kennedy’s right eye before a late blitz that had Kennedy on the defensive.

Looking to lock Gastelum up, Kennedy attempted to grapple with his foe, but instead, it was Gastelum who took control as the bout went to the mat. Kennedy was able to reverse position, but Gastelum punched his way free and had success standing, with that success only growing as the round progressed.

As Kennedy continued to slow down, Gastelum pushed the pace in search of the finish in round three, mixing in punches and kicks to the head and body. Midway through the round, a right-left to the head dropped Kennedy, and as he covered up, referee John McCarthy had seen enough, stepping in at the 2:45 mark of round three.

After trading kicks with Meek, Mein scored a quick takedown, rose to his feet and the two traded again before another takedown from the Canadian. This time the action stayed on the ground a little longer, but once Meek got up, he began landing with more frequency on his foe. Mein weathered the initial storm and tagged the Norway native with two hard rights before a takedown that came with two minutes left, Meek in obvious discomfort on the way down. Back on the feet, Mein and Meek took turns rocking each other, drawing a smile from Mein.

Despite hurting his ribs in the previous frame, as round two began, Meek shook off the injury and went on the attack, landing several hard strikes before scoring his first takedown. Meek controlled the action from the top position and nearly sunk in an arm triangle before firing away with ground strikes to finish off the round.

Meek dominated on the ground once more in the final round, with a late armbar attempt the only offense from Mein in the frame, which wrapped the fight up for “Valhalla,” who ups his record to 9-2-1 with 1 NC. Mein, who had not fought since January of 2015, falls to 29-11.