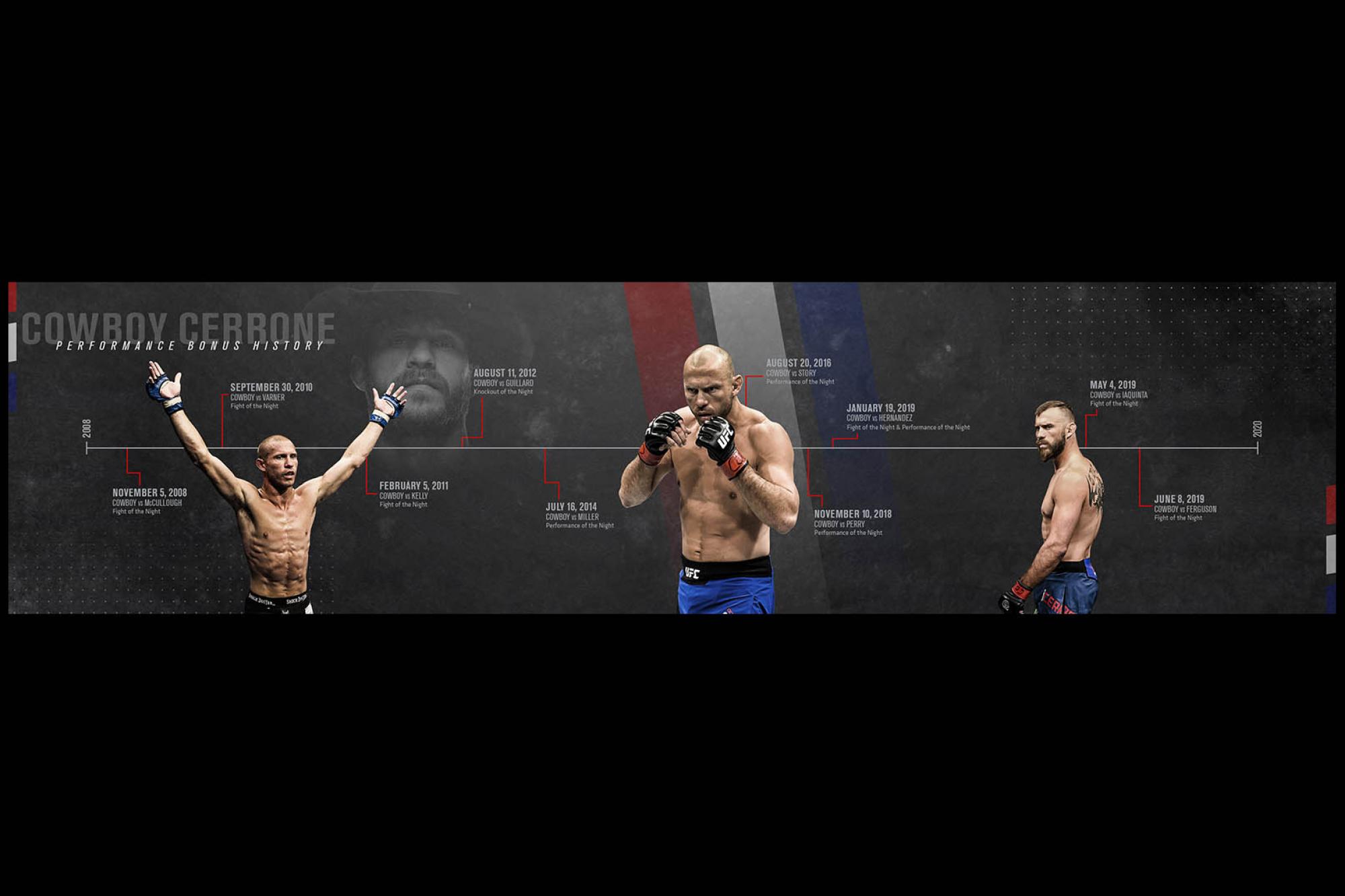 Cowboy Cerrone through the years

Cowboy's accomplishments make him a deadly opponent for McGregor
Jan. 15, 2020

CLICK HERE TO WATCH SOME OF COWBOY'S BEST MOMENTS

Cerrone earns his first post-fight bonus, a Fight of the Night vs. Rob McCullough at WEC 36

Unbeaten in eight pro fights, Cerrone was a young fighter on the move in the WEC promotion, and after a 90-second submission of Danny Castillo, “Cowboy” began to establish himself as one of the promotion’s top action heroes as he pounded out a decision win over Muay Thai ace Rob McCullough that earned him his first Fight of the Night award.

Cerrone earns his 5th WEC post-fight bonus and revenge by besting Jamie Varner at WEC 51. Cerrone would finish his WEC career tied for 2nd with 5 bonuses.

After a controversial technical decision loss to Jamie Varner in 2009 pinned Cerrone with his first pro loss, “Cowboy” was determined to get the WEC lightweight champ back in the cage again, and while Varner didn’t have the belt when they did meet a second time in 2010, the two fought like it was, and this time it was Cerrone evening the score with his rival while the two earned their second Fight of the Night bonus.

Cerrone more than made his bones during his 10-fight run in the WEC, fighting the likes of Benson Henderson (twice), Jamie Varner (twice), James Krause, and Danny Castillo, but many wondered whether he could repeat that success in the UFC. Well, England’s Paul Kelly tried to test him, taking the fight to the Coloradan from the opening bell, but by the second round, Cerrone took over, getting into the mount and then finishing Kelly with a rear naked choke when the Brit gave up his back.

HERE'S HOW TO WATCH ALL THE ACTION AT UFC 246

Former training partners Cerrone and Melvin Guillard fought like bitter enemies in one of the most explosive 76-second fights you will ever witness. Guillard struck first, wobbling the steel-chinned Cerrone early on, but the “Cowboy” fired back with his own bombs, and after a head kick and some punches, it was lights out for “The Young Assassin.”

No one knocks out Jersey-tough Jim Miller. In fact, no one achieved that feat before Cerrone did in 2014, as he broke open a close fight in the second round with a thudding kick to the head that sent Miller crashing to the deck. The win was Cerrone’s fourth in a row, but he still had four more to go before he got his crack at the lightweight crown.

Right up there with Nate Marquardt’s video game finish of Wilson Gouveia was Cerrone’s stoppage of ultra-tough Rick Story in 2016. Started by a left to the head and a right to the body, Cerrone then landed another left punch to the head followed by a right kick to the head that spun Story around. The barrage of shots that followed ended the bout officially, but this one was over as soon as Cerrone scored with his four-shot Tekken combo.

Cerrone sets new UFC records for most wins (21) and finishes (15) with an armbar victory over Mike Perry.

In the same city where the UFC held its first event 25 years earlier, Cerrone showed how far the sport had come with his victory over hard-hitting slugger Mike Perry. Expected by many to stand and trade with “Platinum” Mike, Cerrone instead turned the tables on the rising star, finishing him on the ground with an armbar that showed there was more to Cerrone than his striking.

Cerrone sets a new UFC record for post-fight bonuses with his 15th and 16th bonuses in a KO finish of Alexander Hernandez. He also extends his finish record to 16.

After a run of success at 170 pounds, Cerrone made a spectacular return to the lightweight division at Barclays Center in Brooklyn, halting rising star Alexander Hernandez in the second round of their UFC Fight Night bout. “It feels good being back at 155,” said Cerrone. “The old man’s still got it.”

Cerrone extends his UFC record for wins to 23 with a 5-round unanimous decision victory over Al Iaquinta.

Cerrone’s surge towards a second lightweight title shot continued to gain momentum in the UFC Fight Night main event at Canadian Tire Centre in Ottawa, as he scored a punishing five-round unanimous decision over fellow contender Al Iaquinta. Scores were 49-45 twice and 49-46 for Cerrone, who improved to 36-11 with 1 NC as he extended his record for most UFC wins to 23.

Cerrone earns his 18th overall post-fight bonus in UFC/WEC action, more than any fighter ever, in a Fight of the Night vs. Tony Ferguson.

The lightweight bout between Tony Ferguson and Cerrone had a main event feel, and the two top five contenders delivered on all fronts until a Cerrone eye injury prompted a second-round stoppage win for Ferguson, who extended his current winning streak to 12. As for Cerrone, it was another post-fight performance award for the UFC’s all-time Bonus King.