The Cowboy Cerrone Legacy: "you came to fight"

Donald Cerrone Isn't Close To Done, But He Knows How He Wants To Be Remembered
By E. Spencer Kyte, on Twitter @SpencerKyte • Sep. 13, 2019

Donald Cerrone stood in the blue corner, a grey mouse growing above and below his right eye, threatening to swallow it whole as blood slowly dripped from his nose.

He’d spent the last 10 minutes trading punches and kicks with Tony Ferguson, the surging lightweight contender with a diverse array of ways to bust you up, who entered the cage with designs on pushing his winning streak to an even dozen. The last punch that caught Cerrone landed late — a good couple seconds after the horn signaling the end of the second round — and left the veteran standing in momentary shock before eventually sauntering back to his corner, where Joe Schilling and Jafari Vanier implored him to give his all, as if Cerrone were capable of giving anything less.

Back on his feet and ready for another five hard minutes with Ferguson, Cerrone pushed his left nostril closed with his left thumb and cleared the right side of his nose.

He immediately knew something was wrong.

“The ref said, ‘Are you ready? Are you ready?’ and we both said, ‘Hell yeah!’” said Cerrone, recalling the sequence of events that brought his UFC 238 bout with Ferguson to a premature halt. “And then I blew my nose and I was like, ‘Oh wait! No! No! Not at all ready! Hold on!’”

Cerrone’s eye closed instantly, the result of the veteran gunslinger making the mistake of blowing his broken nose. He immediately started pawing at the puffy grey tissue that had engulfed his eye, trying desperately to create an opening so that he would be able to continue.

He even went as far as to ask the ringside physician if he could play the Mickey Goldmill to his Rocky Balboa.

Despite his initial protestations and desire to continue, the bout was waved off, as Cerrone’s vision was completely compromised. With the crowd voicing their displeasure and his tidy two-fight winning streak at lightweight a thing of the past, all “Cowboy” could do was chuckle as he stood in the center of the Octagon, looking at his swollen face on the big screen while talking to Joe Rogan. 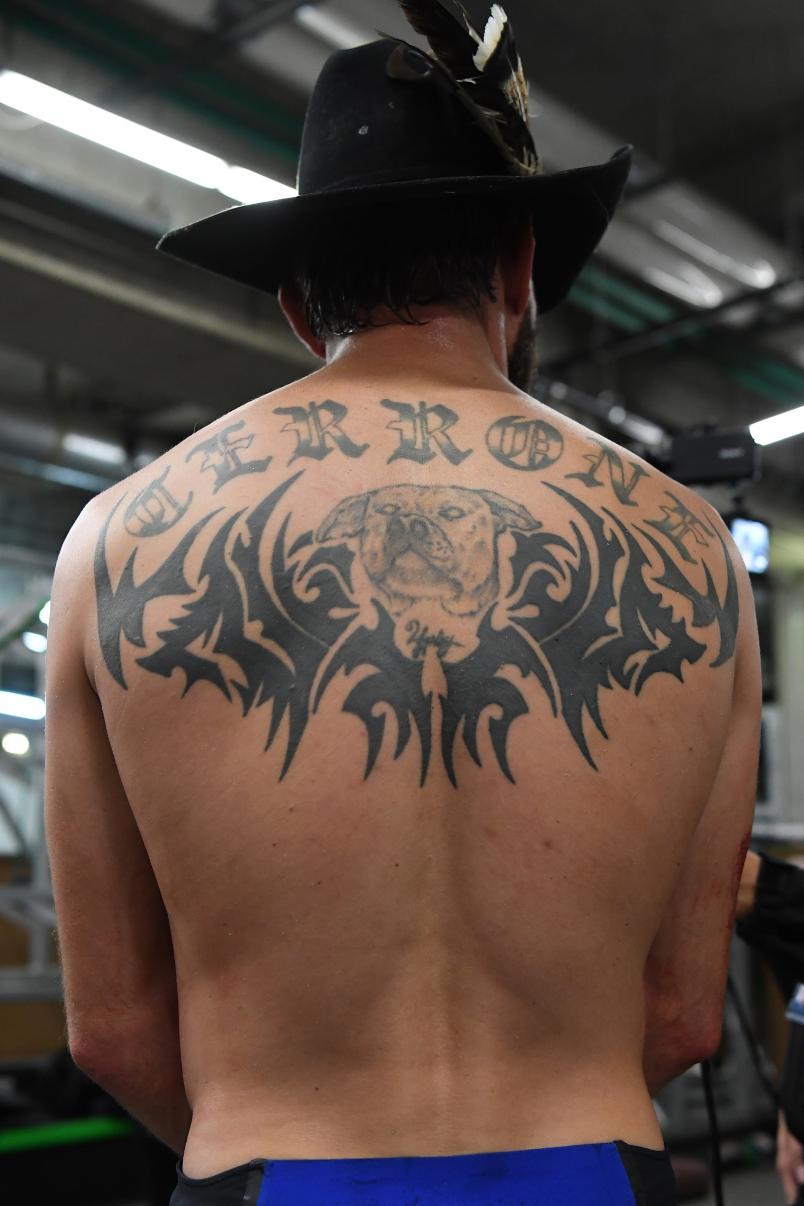 A detail shot of Donald Cerrone's tattoo's backstage after his victory during the UFC Fight Night event at Canadian Tire Centre on May 4, 2019 in Ottawa, Ontario, Canada. (Photo by Mike Roach/Zuffa LLC)

“He didn’t want to win like that and I think the world wanted to see another round, but it is what it is,” he said of the anticlimactic ending of what was an electric encounter. “There’s nothing I can say afterwards, so I just enjoyed it like, ‘Whoops.’”

That “take it all in stride” attitude has been Cerrone’s signature throughout his 13-year career, as he’s never been one to get too pumped up on victories or down on defeats, preferring instead to keep rolling with the punches and get back into the Octagon as quickly as possible.

But this year has carried a different tenor than previous campaigns, as the 36-year-old moved back to the 155-pound weight class with one goal in mind — winning the UFC lightweight title — and after impressive efforts against Alexander Hernandez and Al Iaquinta earlier this year, the loss to Ferguson in Chicago this summer likely put a little more distance between “Cowboy” and the championship.

“To be honest with you, I don’t think that fight really set me back too far,” Cerrone said of his path to UFC gold. “With a win this weekend, it puts me right back in the mix. I think Tony fights (undisputed champion Khabib Nurmagomedov) next and then who else is there? Me.

“It’s not like, ‘Who else (could he fight next)?’ No — it’ll be undeniable (that I’m next in line),” he added. “I don’t think it set me back far, other than being immediately in line for the title like a win over Tony would have done. It set me back one, but you just take it in stride and here we go.”

And those strides have led Cerrone to Vancouver, British Columbia, Canada, where he’s set to square off with fellow title hopeful Justin Gaethje in one of the most anticipated bouts of the year.

Like Cerrone, the 30-year-old Gaethje is an all-action fighter who is allergic to being in a boring contest. Following a 10-fight run under the World Series of Fighting banner that included a championship victory and five successful title defenses, the Trevor Wittman protégé pushed his record to a perfect 18-0 with a second-round stoppage win over Michael Johnson in his promotional debut.

Through five bouts inside the Octagon, “The Highlight” is just 3-2, but his first two appearances finished first and second in the 2017 Fight of the Year race, and he’s rebounded from back-to-back losses to Eddie Alvarez and Dustin Poirier to collect consecutive first-round stoppage wins over James Vick and Edson Barboza heading into his headlining clash with Cerrone on Saturday.

“He’s a buddy. That’s my pal,” Cerrone said of Gaethje, who has shown as much of an affinity for post-fight bonuses as “Cowboy,” having garnered six through his first five fights in the UFC.  “We’re buds. I actually texted him and told him to pick me up some Copenhagen wintergreen long cut on his way up here because I only brought two cans with me, so I’m having him bring me up a wad when he comes.

“Gaethje’s cool, man; we’re buds. There’s no crazy build-up for this fight. He’s a savage and it’s going to be fun.

“I wish I enjoyed more of the sporting side of it,” added Cerrone, who has frequently found himself in matchups filled with animosity and tension, the preamble to fight night often soundtracked by trash talk. “Like, why do I have to hate you? Why do I need to talk s*** and make a big scene? Let’s go hang out all week and cut weight together, then go fight and get paid and then go on vacation together.”

If any two fighters could possibly pull off such a two-week stretch, it would be Cerrone and Gaethje, as they’re cut from the same cloth, right down to the way they approach their time inside the Octagon and the lasting legacy they want to leave behind.

Watch The Potential Fight of the Year Saturday on ESPN+

As much as his return to lightweight has been fueled by a quest to win gold and keep him from being “the best fighter to never win a UFC title,” how things shake out at the top of the division and which matchups come together is largely out of his control.

But the one thing he can control is the effort he puts forth each and every time he marches out to the Octagon, cowboy hat on his head, Kid Rock blaring through the arena.

“I guess my mantra or my overall legacy that I want is that if I’m fighting, I want people to figure out how they can watch it because they know it’s going down,” said Cerrone, echoing sentiments both he and Gaethje have expressed in the past.

“I want to know that when I’m done and I hang my hat up, people are like, ‘Man, I loved watching you fight; you brought it every time. No matter win, lose, or draw — you came to fight.’ That’s what I want.”

While the end is nowhere in sight, it’s safe to say that Cerrone’s legacy is already established, which is why this weekend’s main event — like just about all of his fights before it — is a can’t-miss event for fight fans.