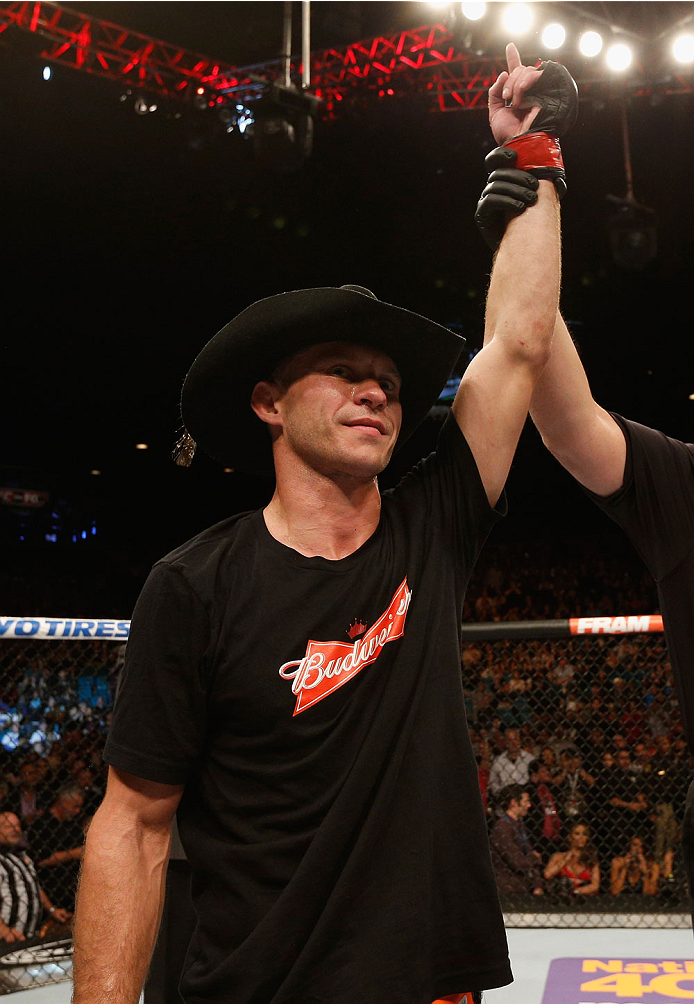 Donald Cerrone’s signature tagline is “anytime, anyplace” and if there was every any question to just how serious that claim is, those doubts have officially been erased.

The most prolific fighter on the UFC roster provided further proof that he’s willing to throw down wherever and whenever the promotion will allow as “Cowboy” has stepped up to face Benson Henderson in the co-main event at Fight Night: McGregor vs. Siver when the Octagon returns to Boston on Sunday, January 18. The hard-charging lightweight will replace Eddie Alvarez - who was forced to withdraw due to injury - and do so just 13 days out from his unanimous decision victory over Myles Jury this past weekend at UFC 182 in Las Vegas.

The bout will mark the third time Cerrone and Henderson have gone toe-to-toe, but it will be their first matchup under the UFC banner. Their two previous meetings came inside the “little blue cage” of the now-defunct WEC promotion, with “Smooth” getting his hand raised at the end of both affairs. Their first bout earned Fight of the Year honors in 2009, and their upcoming trilogy fight in Boston became a highly-anticipated affair immediately upon announcement.

Yet, while there is certainly history between the two fighters, Cerrone isn’t carrying a vendetta into his third bout with the former lightweight champion. The 31-year-old Colorado native simply saw the bout as the next big opportunity on his career path, and one more chance to further his legacy of being willing to get down to business anywhere the UFC will allow him to fight.

“That’s absolutely what this is about,” Cerrone replied when asked if legacy was his motivation for taking the bout. “It’s not like I just say that and when they bring a fight to me I tell my friends I have to take the fight because everyone expects me to. No…when they offer it to me I’m like ‘absolutely, let’s go.’ There’s no name that comes across that table I’m scared of or I’m like ‘Damn…I can’t take that.’ I’m down to fight and this is what we do. This is what I’m paid to do and it’s my job. I wasn’t thinking about revenge or anything like that. He’s just the next guy in line so bring it on.”

With his victory over Jury at UFC 182, Cerrone has now put together an impressive six-fight winning streak and has once again climbed to within striking distance of a title opportunity. Where the Albuquerque transplant has been close to a shot at UFC gold on two other occasions, his recent run of success has shown a much different look from one of MMA’s most prolific finishers as Cerrone has put away four of his opponents over the course of his current run.

A win over the MMA Lab representative would make it seven in a row and make his case for the next No. 1 contender spot hard to deny. That said, Cerrone isn’t concerned with how that particular picture takes shape. He just wants to keep scrapping and he believes doing things the “Cowboy way” will eventually get him to where he’s aiming to go.

“I guess I could sit back like every other fighter and wait for an opportunity but I’m not every other fighter,” Cerrone said. “I’m my own guy and I don’t give a s**t. I want to keep things rolling. If I’m going to be the champ I have to beat everyone anyway. What does sitting and waiting and holding my position do?

“I have no idea about the title. I could not tell because I don’t have the formula for a title shot. But I know if I beat Ben then who is left? I have no clue how this is going to work and I don’t care. I’m going to get that belt by the end of the year. If you want to be the best you have to beat the best. My only question is that when I get that belt, who is going to be left to fight? That’s what I want to know.”