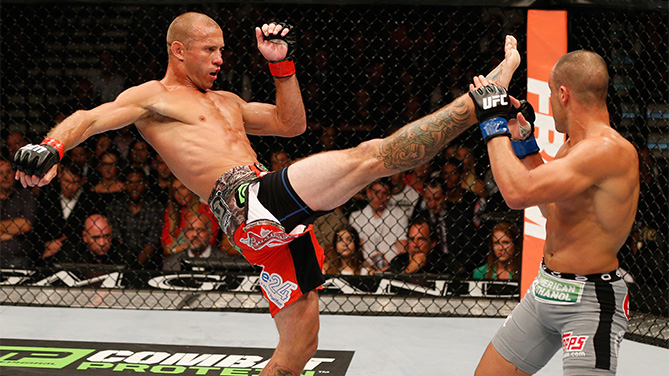 LAS VEGAS, September 27 – Longtime lightweight contender Eddie Alvarez delivered on his promise in his highly-anticipated UFC debut, but Donald “Cowboy” Cerrone was a bit better in their UFC 178 co-main event Saturday at the MGM Grand Garden Arena, as he pounded out a hard-fought three-round unanimous decision victory.

Scores were 29-28 across the board for Cerrone.

Alvarez appeared to have a tough time getting a read on Cerrone in the early going, with “Cowboy” not going through the same difficulty as he tagged the Philadelphia native with punches and kicks. When Alvarez did get within striking range with under three minutes left, he was able to grab Cerrone and fire off a series of shots, but the Colorado native barely moved under the assault. Cerrone did get rocket briefly moments later, but it was the UFC vet finishing the round strong.

The first half of the second round saw Cerrone land several kicks and knees, and as the round progressed, it looked like he was starting to break Alvarez down. Alvarez was game, but with his takedown attempts coming up empty and his right eye bruising up, things were beginning to go downhill for him.

Alvarez knocked Cerrone off balance with a right hand early in round three, drawing a roar from the crowd, and the punch seemed to energize him as he moved forward. In the second minute though, it was Cerrone rallying and the two exchanged against the fence. Now it was a question of who wanted it more, and both lightweights fit that description, but Cerrone’s shots were more accurate, and the added dimension of his kicking game pushed him into the lead. With less than two minutes left, two kicks to the leg hurt and dropped Alvarez to the mat. Surprisingly, Cerrone followed Alvarez to the mat, allowing his foe to rest his leg, but “Cowboy” kept the pressure on with his ground strikes, sealing his hard-fought victory.

With the win, Cerrone improves to 25-6 with 1 NC; Alvarez, long seen as the best fighter not on the UFC roster before his signing earlier this year, falls to 25-4.
> Watch: Donald Cerrone Octagon Interview | Donald Cerrone Backstage Interview 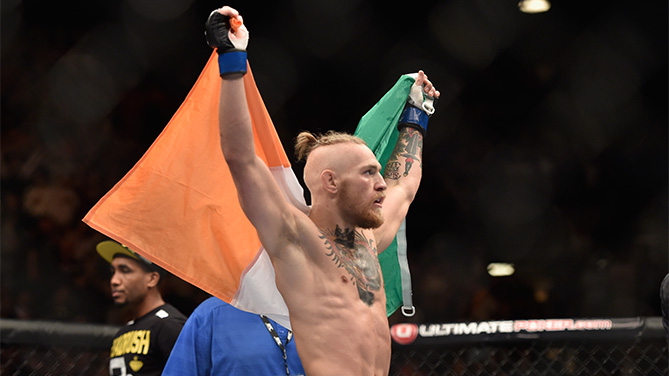 It took less than two minutes to justify the hype behind Ireland’s Conor McGregor, who thrilled the fans from Ireland that bought 10 percent of Saturday night’s tickets as he knocked out number five-ranked featherweight Dustin Poirier in a single round.

The win was the brash Irishman’s 12th straight, with four of those victories coming in the Octagon that he has seemingly conquered in a little less than a year and a half.

“I don’t just knock them out, I pick the round,” McGregor, who called for a shot at the featherweight title after the fight, said. “It’s a whole ‘nother ballgame when they get hit by me.”

McGregor shot off a high kick to start the bout, just missing Poirier. The Louisiana native remained calm, not getting drawn into a slugfest as McGregor moved forward and taunted him. In the second minute, Poirier landed the first punch to the face, but got rockeby a 1-2 seconds later. After that shot, McGregor moved in and dropped Poirier with a left elbow to the head as the American ducked. The follow-up barrage on the stunned Poirier brought in referee Herb Dean to stop the fight at 1:46 of the first round.

With the win, McGregor, who said he tore ligaments in his thumb four weeks ago, improves to 16-2; Poirier falls to 16-4.
> Watch: Conor McGregor Octagon Interview | Conor McGregor Backstage Interview 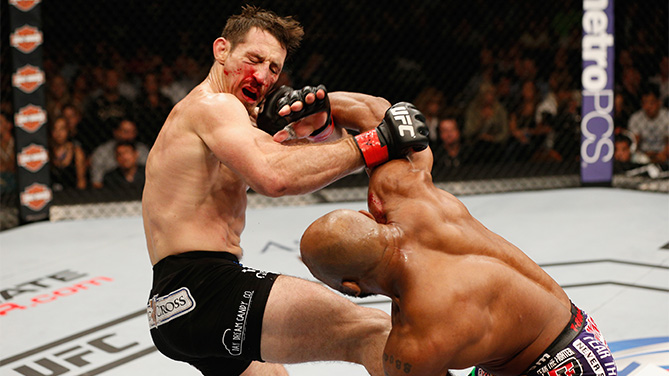 After a fairly tame round and a half, things got wild in the middleweight matchup between Yoel Romero and Tim Kennedy, with Romero pulling off an improbable third round stoppage victory that was touched by a tinge of controversy after Romero got several added seconds to recover on his stool after a second round in which he was almost stopped.

The unorthodox Cuban southpaw mixed his offensive attack up nicely in the first round, keeping Kennedy guessing throughout while also bloodying his nose with a left cross. It was almost to the point where it looked like Romero didn’t know what he was going to do next, but it all worked out in the end.

Kennedy (18-5) got busier in the second, working primarily behind kicks to the body, and while his takedown attempts were coming up empty, the Texan kept pressing, nearly catching Romero in a guillotine choke as the two scrambled. By the end of the round, Romero was cut over the left eye, winded, and Kennedy almost finished him with a flurry against the fence.

After a long stay on the stool as the third round commenced, allowing him to get precious time to recover, Romero (9-1) finally came out of his corner and almost immediately dropped Kennedy with a left-right, stunning the crowd. Romero went on the attack, chasing Kennedy across the Octagon and getting him to the mat, where he unleashed a series of ground strikes. After several unanswered blows, referee John McCarthy stepped in to stop the fight at the 58 second mark of round three.
“If you can’t get off the stool in a minute the fight is over," Kennedy said. "Not a minute and a half, not two minutes, not two and a half minutes while your coaches are still putting Vaseline on you and toweling you off. That fight should’ve been over, period."
“I don’t know what happened between rounds," Romero said. I was fine but I didn’t hear him trying to start the fight. My coach was in front of me and there was a lot of confusion. I was ready to fight I just didn’t know it was time.”
At the time of the stoppage, the bout was even, 19-19, on all three scorecards.
> Watch: Yoel Romero Backstage Interview 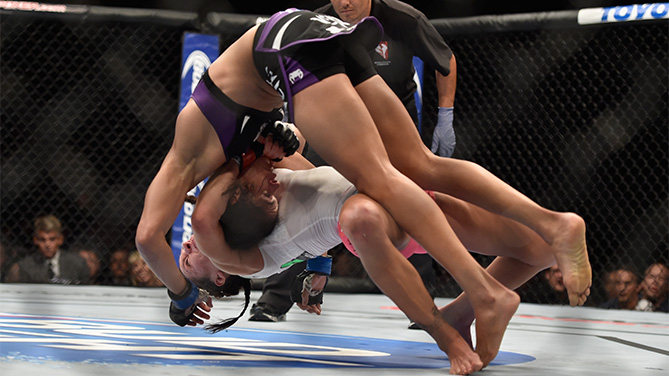 After a harrowing year and a half that included a serious knee injury and the untimely death of her husband, number one women’s bantamweight contender Cat Zingano returned to the Octagon for the first time since April of 2013 and picked up where she left off, stopping Amanda Nunes in the third round.

The fighters immediately locked up to begin the bout, with Nunes winding up on top as the two hit the mat. Zingano nearly caught Nunes with a submission from the bottom, but Nunes muscled her way out of trouble and went back to work on her trademark ground and pound attack. Zingano took the shots well and still looked for the submission, Nunes relentless every step of the way. With 90 seconds left, Zingano found her way to the top position, but as the round entered its final minute, she stood briefly before another flipping Nunes to the canvas.

Zingano threw Nunes to the mat to open round two, now getting the chance to fire off her own ground strikes. The Coloradan worked effectively on the mat, giving Nunes no chance to breathe or fight her way free, and it was an impressive turnaround for Zingano after a rough first round.

Aggressively pursuing the finish as round three began, Zingano scored with hard knees and another flip of Nunes before the two went back to the mat. This time, Zingano opened up with both hands and after a series of unanswered shots that bloodied the Brazilian, referee Jason Herzog intervened at 1:21 of the third round.