Court McGee - Carrying a Different Message to the Octagon

"I enjoy the competition. I enjoy being in the fight. I enjoy trying to figure how to beat you, the other guy in the cage.” - Court McGee 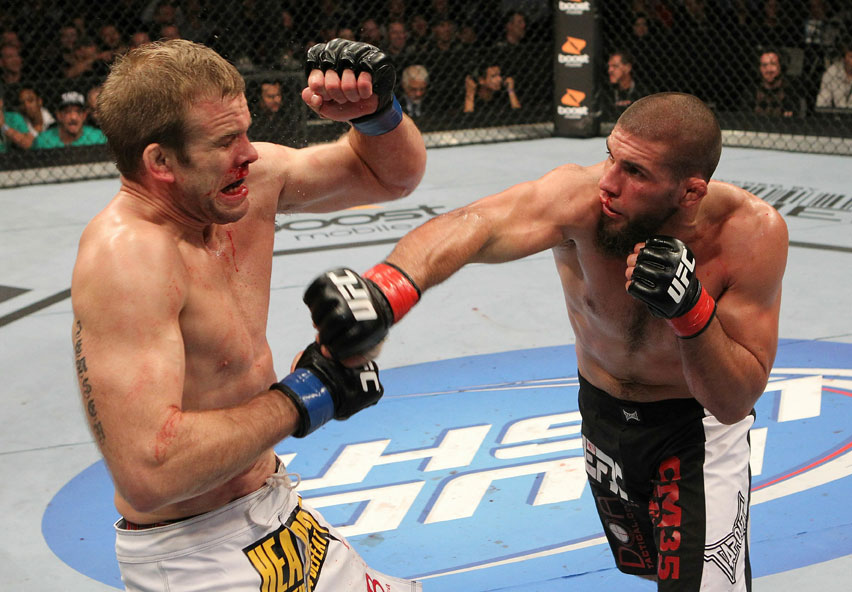 To most, that benign and simple statement’s meaning has been lost on them. To the winner of the 11th season of The Ultimate Fighter, being a normal Joe in the suburbs of anywhere, USA is the living testament that Court McGee wants to pass on to others who look up to him as an example. Namely, those who struggle with addiction. McGee’s success in MMA may only be overshadowed by his parallel success in sobriety. These two distinctly different journeys are the same one for McGee, and combined they make him successful in life.

“Making sure to show up every day is important, but making sure I show up for the right reasons every day is even more important,” says McGee. “1961 days ago (at the time of this interview), I sobered up and was the last drink or drug I had. 1961 days ago. I did that one day at a time. If you would have seen me five and a half years ago, if I was your neighbor, which I wouldn't have been your neighbor, I was pitiful. I can honestly say now that I'm a productive member of society. I pay taxes, both of my cars are registered, I have a home, I have a mortgage I'm paying every month, I have two sons, I have a wife, I have health insurance and I'm happy. I have a lawn, I have my own lawn mower, I'm weeding my own lawn and that's what is important. That's what is important to people who look up to me and watch me as a fan and as a neighbor that I'm a normal guy. I'm your neighbor.”

At 26 years old, McGee has overcome a lifetime’s worth of adversity. The elite fighters who make it the UFC have had to claw their way to get here, but they usually don’t start their odyssey into MMA immediately following several years where McGee describes himself as a “hailstorm of destruction”. That’s generally not the jumping off point to become a professional athlete, but that is the purpose of McGee’s story, and he’s here to prove it can be done. And with a 13-1 record plus the TUF trophy, it signifies that McGee is right.

“This is a really hard sport,” states McGee. “It wears you out mentally and physically and not very many people make a lot of money in it. I do this to carry the message to other people who struggle that there is a way out. That's why I get up every day and fight. The number two reason is the payout to better take care of my family. At any point in time before I made it on the show, I said I would do anything I can to pursue this as a career as long as my family doesn't go without. That meant I had to manage myself, learn about sponsorships and contracts. I lost money on contracts, I got screwed on contracts. I've signed contracts for $300 a month for six months and then had my coach steal that money from me when I was gone. I've been through the ringer. I had to find a new coach. I've had to compete sick and injured. But it doesn't matter because dedication, determination and perseverance supersede anything in this sport.”

On September 17th at UFC Fight Night in New Orleans, “The Crusher” will enter the Octagon for the third time to take on South Korea’s Dongi Yang. At 10-1, Yang tasted his lone defeat at the hands of McGee’s TUF housemate Chris Camozzi in a close split decision at UFC 121. In March, “The Ox” got back to his winning ways with a second round TKO of Rob Kimmons. The Korean Top Team product has won all of his fights by stoppage, with nine of them by knockout.

“[Yang] fought the same night I fought at UFC 121 and he fought a buddy of mine, Chris Camozzi, one of the guys from the show,” says McGee. “Chris said he was strong and that he comes out hard in the first round. He's a southpaw, so he's probably going to throw a lot of straight lefts. For me, I'm probably going to want to stay outside of his right foot because that was one of the first things I ever learned in boxing. I know he's dropped guys with right hooks and he's TKOed guys from their back.”

Besides that, the Utah native isn’t interested in finding out more about Yang until the two tangle in the cage. Whereas some fighters may agonize over video tape on their opponent, McGee is focused on making sure he’s the best he can be day in and day out. It is an inch by inch pragmatist mindset that got McGee into MMA, into the TUF house, winning TUF, and, most of all, sobriety. McGee isn’t worrying about the future; he’s zeroed-in on the practice today, so come fight time he will be ready for Yang.

“You can over-complicate things and waste so much time thinking about things that haven't even happened yet,” asserts McGee. “The main thing is showing up in great shape and showing up uninjured. The only fight I cared about really watching footage was for that Jeremy Horn fight and that was the one I lost. All I watched was him head kick Forrest Griffin and knock him out. I watched that 50 times. I had my dad cornering me for that fight. I was training at this little gym with guys who had never fought before. Show up in shape and show up prepared to fight. It's a fight. That happens to be on my list of three favorite things to do. #1 is to carry the message to people who struggle. #2 is the payout to better take care of my family and #3 is I enjoy the competition. I enjoy being in the fight. I enjoy trying to figure how to beat you, the other guy in the cage.”

Staying uninjured has been the almost impossible task for McGee this past year, as he suffered back-to-back injuries since winning TUF. “I've made it to the UFC and I get injured in my first fight out of the house and I've got to sit out,” said McGee, who initially shattered the second metacarpal on his right hand on Ryan Jensen’s head in the second round of their UFC 121 fight. After surgery and time off, McGee injured his left knee during a wrestling practice with Jake Shields, Ramsey Nijem and Gilbert Melendez in preparation for a fight in June. “It's been the most frustrating thing ever.”

After a rollercoaster year following McGee’s first two fights and first two wins in the UFC, “The Crusher” is healthy and has been training non-stop for this fight. “Our gym in Orem is The Pit Elevated, and it's basically the Pit Utah,” says McGee whose connection with the renown fight gym The Pit started on TUF when McGee was picked to be on the team of Chuck Liddell, easily the most acclaimed product of The Pit. “I made it into the house and I was picked by Chuck and I just fell in love with every one of them dudes: Jake Shields, Scott Epstein, Howard Davis Jr., John Hackleman and Chuck. After the show, I called Chuck and asked him if he thought John would like to coach me. Chuck got me a plane ticket and flew me out there and I stayed at his house and trained side-by-side with him as he was training for Rich Franklin and I was training for the finale.”

Now, McGee is set on a collision course with “The Ox” this weekend. Soon, all the time and energy he has put in with The Pit Elevated fight team, with his jiu-jitsu coach Jason Mertlich and with his head coach Hackleman, will be put on display for UFC fight fans to see. It’s what McGee is here to do, to show that it’s all possible if you work at it and you fight for it. For him, it’s more than a fight, it’s celebration of life.

“I'm really excited,” exclaims McGee. “Now's the time. It's not like I made it into the UFC and I'm done. Now it's my chance to give it all I got. Regardless of what happens, I put forth 100% of my effort every day and in every practice and do the best that I can do to make sure I show up and do the best that I can do in front of the world. I'm excited. I've got a great opponent. I'll be out there fighting there alongside my buddy Jake (Shields). My wife and my mom and dad will be out there. Clay Harvison, who trains with us, and another guy named Jorge Lopez, who I’ve been training with for years, will be fighting too. I'm excited to show up there and give it all I got. This is what I do and this is how I carry the message. And I'm uninjured, which makes it even better.”

In the end, “The Crusher” sounds like he would be a great neighbor.