Court McGee to be honored by Utah Government today 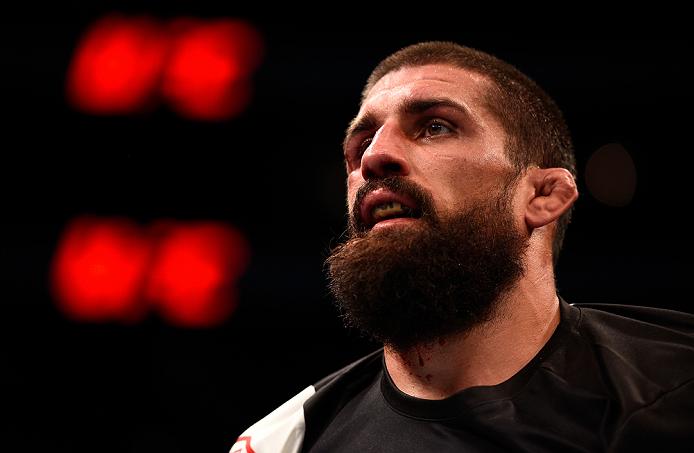 It was the call no one wants to get, and that was especially true for Court McGee.

“It was a detective, saying, ‘We need you to call us back.’”

“I hadn't received that call in a long time,” said McGee, whose voyage through the world of drug addiction had him on the local police department’s rolodex for a while. But that was years in the past. McGee was sober, he was a UFC fighter that had just won The Ultimate Fighter, and he had moved on.

“I kind of freaked out a little bit,” he said before turning to his wife, Chelsea.

“Call the guy back,” came the voice of reason.

So McGee returned the call, and it turned out that this wasn’t just any officer, but the one who saved the fighter’s life the night he overdosed on heroin five years earlier.

“If he had not found the heroin, they wouldn't have been able to revive me,” McGee said. “They did CPR and defibrillations for 15 minutes and they couldn't get a pulse. They were running out of options. I wasn't a known drug user and I didn't have a bunch of track marks, but I had recently started shooting up heroin. Narcan reversed the effect of the heroin overdose.”

Now that angel from the past had returned, and having seen McGee’s story of redemption, he had a favor to ask.

“You've got a ton of fans here,” the officer told McGee. “I'm putting on this seminar. I would
love for you to share your story at the capitol building in front of this narcotics convention.”

McGee was nervous, but he agreed.

“I had spoken a few times in 12-step meetings, but not like that,” he recalled. “I figured I get out and fight in front of millions of people, so suck it up, dude. Go tell your story.”

He did. And since then, he estimates that he’s told his story at approximately one thousand locations in the ensuing decade, likely saving countless lives in the process. It’s why today, the Utah state government will honor him with a citation in its capitol building, not just for his athletic accomplishments, but primarily for bringing awareness to the opioid epidemic raging through the state and the nation.

It’s a rare honor, with an estimate of only three such citations given per year, but one richly deserved, as McGee has pulled no punches in telling his story and offering a helping hand, which he hopes to continue to do through the non-profit organization he is launching, The McGee Project. With the McGee Project kicking off, it’s clear that to the 33-year-old, this acknowledgement from the Utah government isn’t the end, but just the beginning. And he is still needed by those struggling with addiction.

“There are legitimate statistics saying there are 24 people that will overdose this month from the age of 17 to 24 on heroin alone,” said McGee. “It's your mom, it's your dad, it's anybody. And that helps break some of the stigma. But if you use, you will be completely homeless, alone and shooting up heroin. And the only solution you have or will have is to continue to use to figure it out. And you're not gonna know where to turn.”

After overdosing, McGee got a dose of real talk from a recovering addict in his 60s who visited him in his hospital room.

“He was a 20-year sober heroin addict,” McGee said. “He came in and talked to me for five minutes after I came out of my coma. ‘Listen kid, you need to go to drug treatment, you need to stay in there, and if they offer you 12-step meetings, you need to go, you need to hang around somebody that has a lot of sobriety.’ I said I'll give it a try.”

The fight was just beginning, though, with treatment not being the magic solution to everything.

“I got into a significant amount of trouble when I first got sober, and I was pretty sure I was going to spend some time in the penitentiary,” McGee said. “In fact, I asked the District Attorney at the time just to put me in prison. I stayed sober for about six months and then I had one drink - the first drink I had legally at 21 - and two weeks later I was in Iowa and I had caused so much wreckage in just two weeks and I thought, 'Man, I can't even have A drink, I can't have anything.' I called this District Attorney and told her I left the state, I can't stop drinking and using and I think I just need to go to prison. That will dry me out, it will help my parents because they'll know where I'm at and I won't cause anymore problems.”

McGee was told to get back to Utah that Friday. Sober

By Wednesday, he had a job interview with a commercial plumbing company. Let’s just say McGee isn’t the guy to go to for interviewing tips.

“I sat down and I told the guy, ‘You don't want to hire me. I've got three days of sobriety, I have a ton of criminal charges and I need a 12-step program because I can't quit drinking, and I've got a lot of baggage. He was like, 'Great, sounds like we can go to 12-step meetings together. You're hired.’”

McGee laughs, and he’s able to now, knowing how the story eventually progressed and how he turned everything around.

He’s stayed sober for over 4,300 days. He’s a husband and father, and he’s put together seven UFC wins since his debut in 2010. Currently on the sidelines after recent shoulder surgery, McGee is looking forward to adding to that win total when he returns, but for now, he’s got plenty to keep him busy.