It’s a ritual that has captivated fight fans for decades, the walk from the locker room into the Octagon or ring. For some fighters, it’s the time to flip the switch and prepare for battle, while others use it to entertain and show off different aspects of their personality. Whatever it is though, it’s the few minutes where the stage belongs solely to a fighter, and here are 20 examples of those who used that time the best as we continue to count down towards UFC 200. 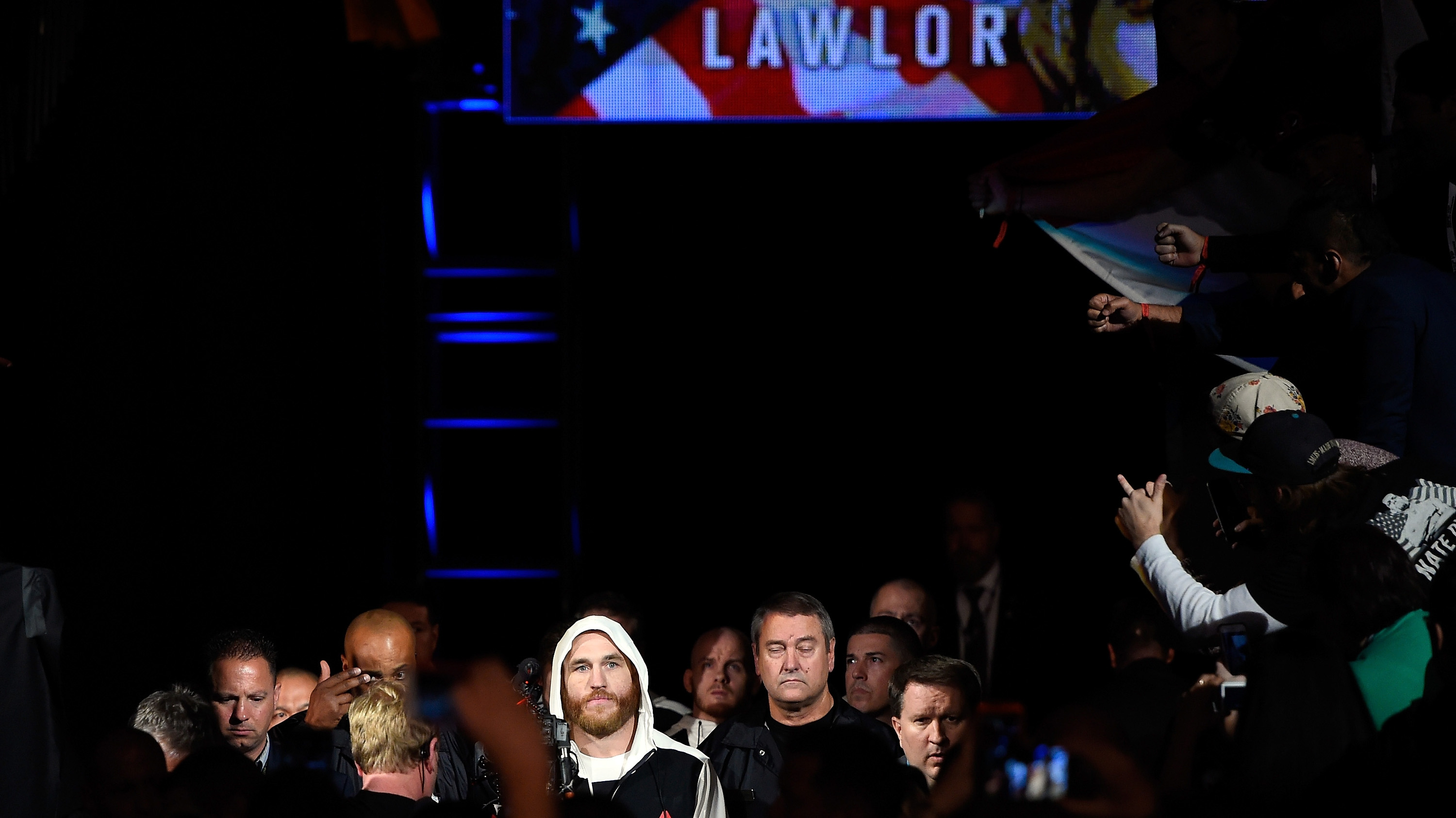 Tom Lawlor’s early Octagon walks were a bizarre form of performance art, making it tough to choose just one in particular for this list. And while many will gravitate to his recreation of a Hulk Hogan entrance with “Real American,” for pure hilarity, I’ll go with his UFC 100 walk to “Who Let The Dogs Out?” complete with Lawlor walking fellow UFC vet Seth Petruzelli up the aisle on a leash. 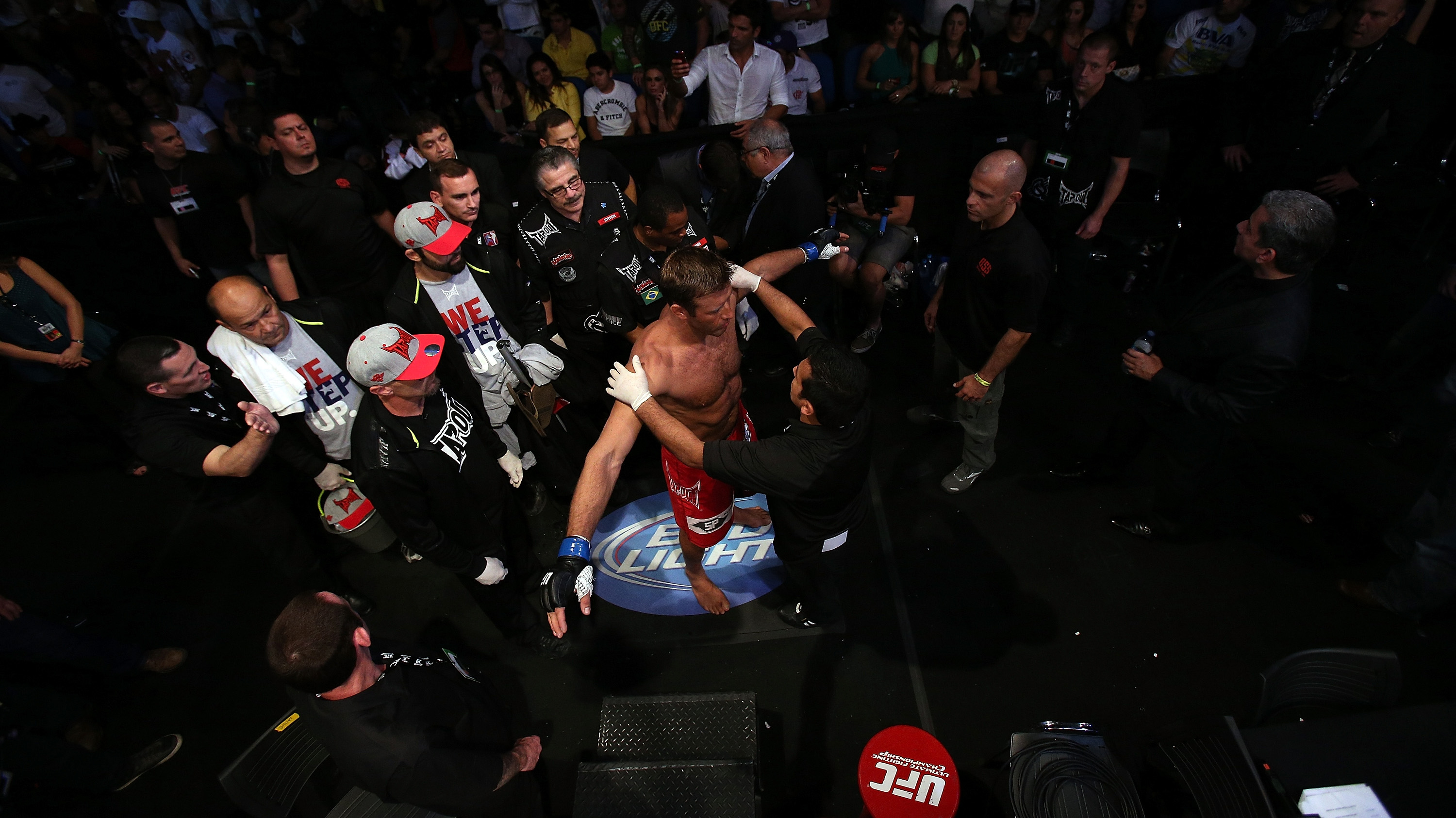 Not your typical entrance song, The Who’s “Eminence Front” isn’t even the typical song you would choose from the band’s catalog to serve this purpose, but Stephan Bonnar certainly selected a winner with this tune, which really helps set a mood before the fight. 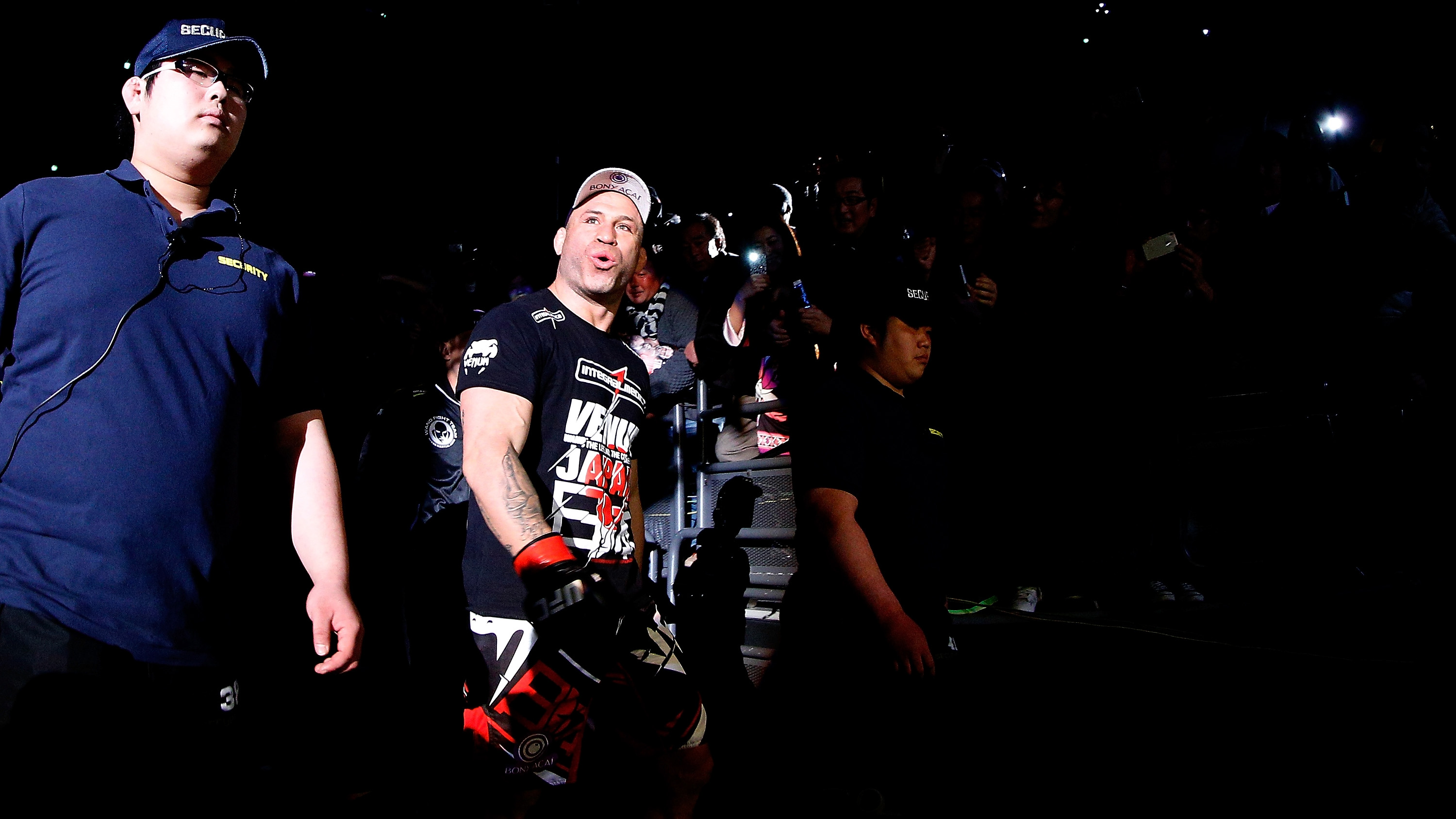 I was never a fan of electronic dance music, and at 47, I’m certainly not a fan today, but at least whenever I’m somewhere that’s playing “Sandstorm” by DJ Darude, I can smile and say “Oh yeah, that’s Wanderlei Silva’s music.” Yes, I’ve probably lost some hearing to that song and eyesight to the strobe lights that can accompany it, but knowing that seeing “The Axe Murderer” fight would be my reward, I’ll call it suffering for my art. 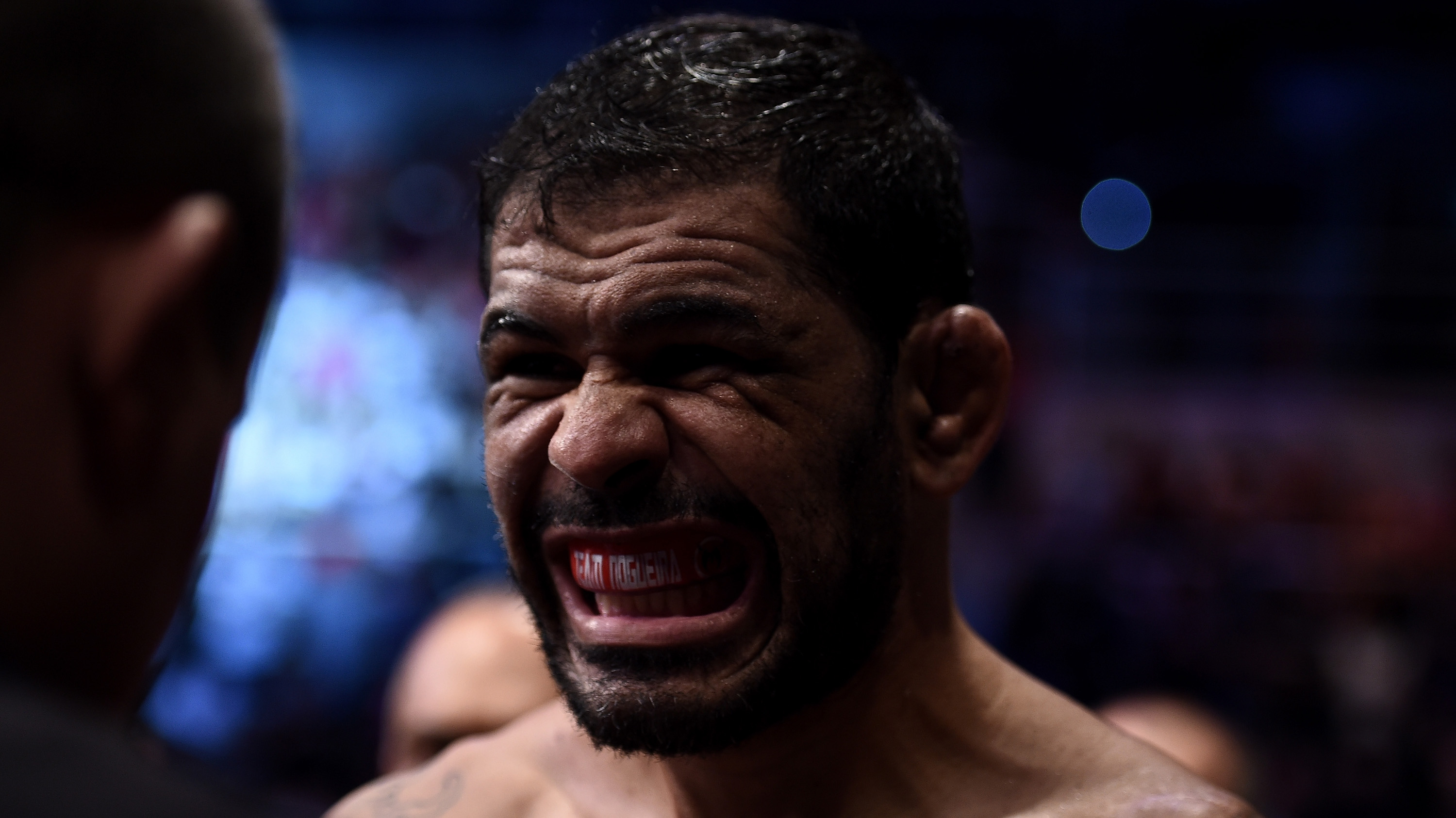 Personally, when you match my all-time favorite fighter with one of my all-time favorite songs, it’s a winner every time. One day I’ll have to ask legendary former PRIDE and UFC heavyweight champion Minotauro Nogueira why he chose the Stones’ “Gimme Shelter” as his entrance song for so many fights, but in the meantime, rewind and just enjoy the sounds of Mick, Keith and the boys doing their thing. 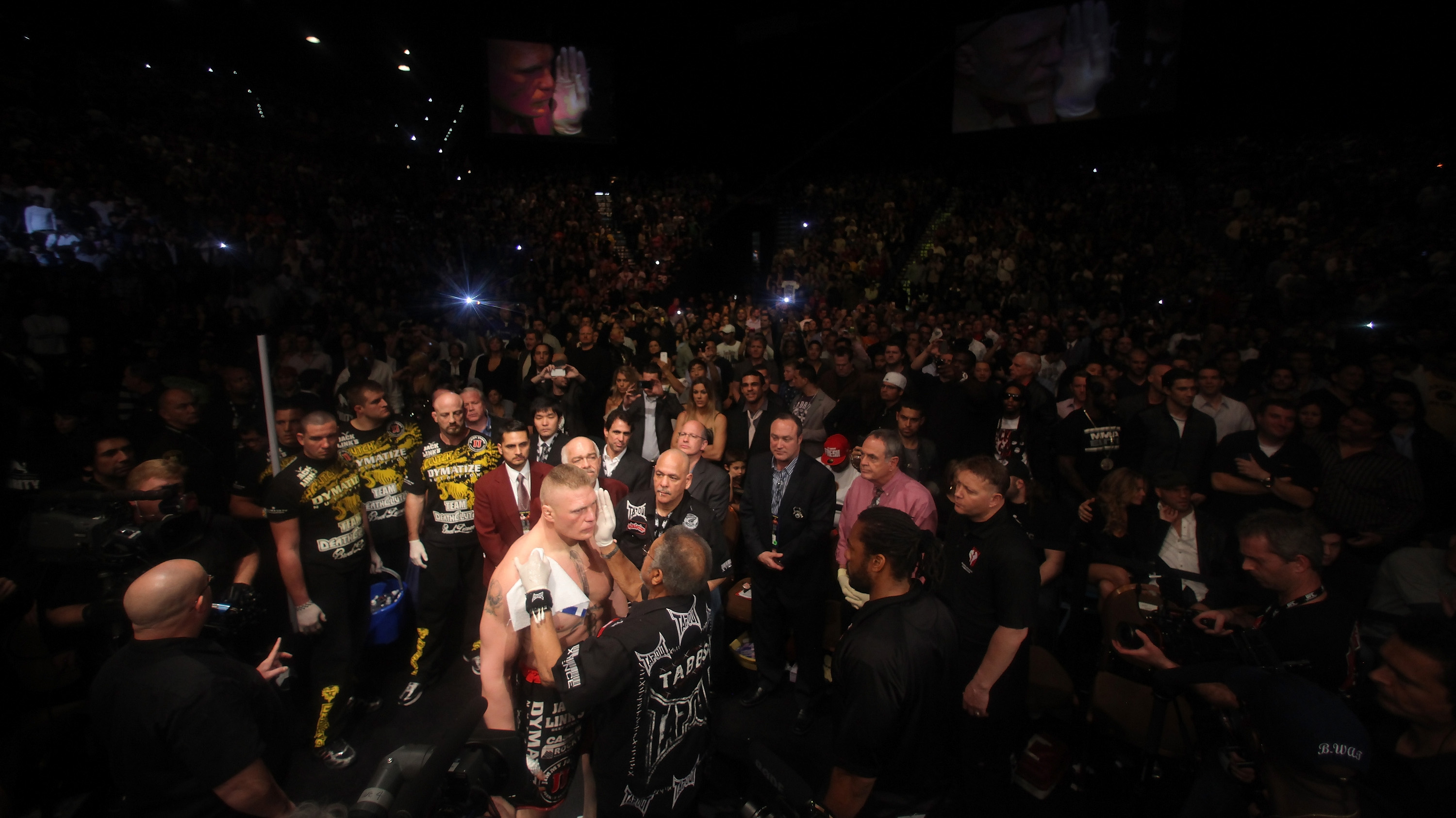 You never truly realize how huge Brock Lesnar is until you see him live, and on fight night, it’s got to be an ominous feeling for a fighter to hear Metallica’s “Enter Sandman” and then see Brock Lesnar tearing out of the locker room. The former heavyweight champ may not have had a long career, but whenever he made that walk, it was always something to see. 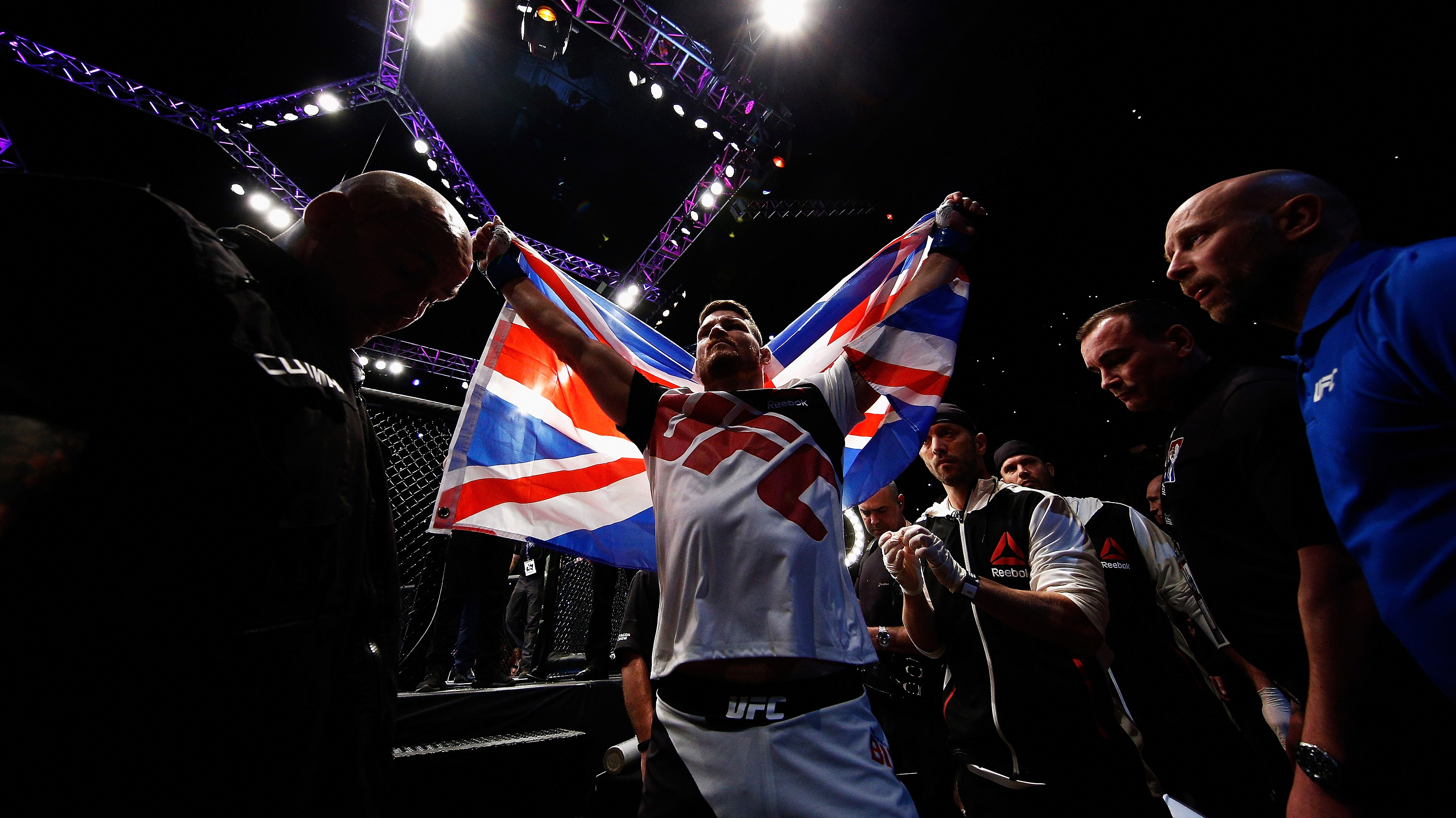 I’ve always considered longtime middleweight contender Michael Bisping more Oasis than Blur, but when you hear the opening strains of Blur’s “Song Two” hit the speakers, you know who’s making their way to the Octagon. Like many of the fighters on this list, they’ve made the song they walked out to not just their calling card, but one synonymous with them. 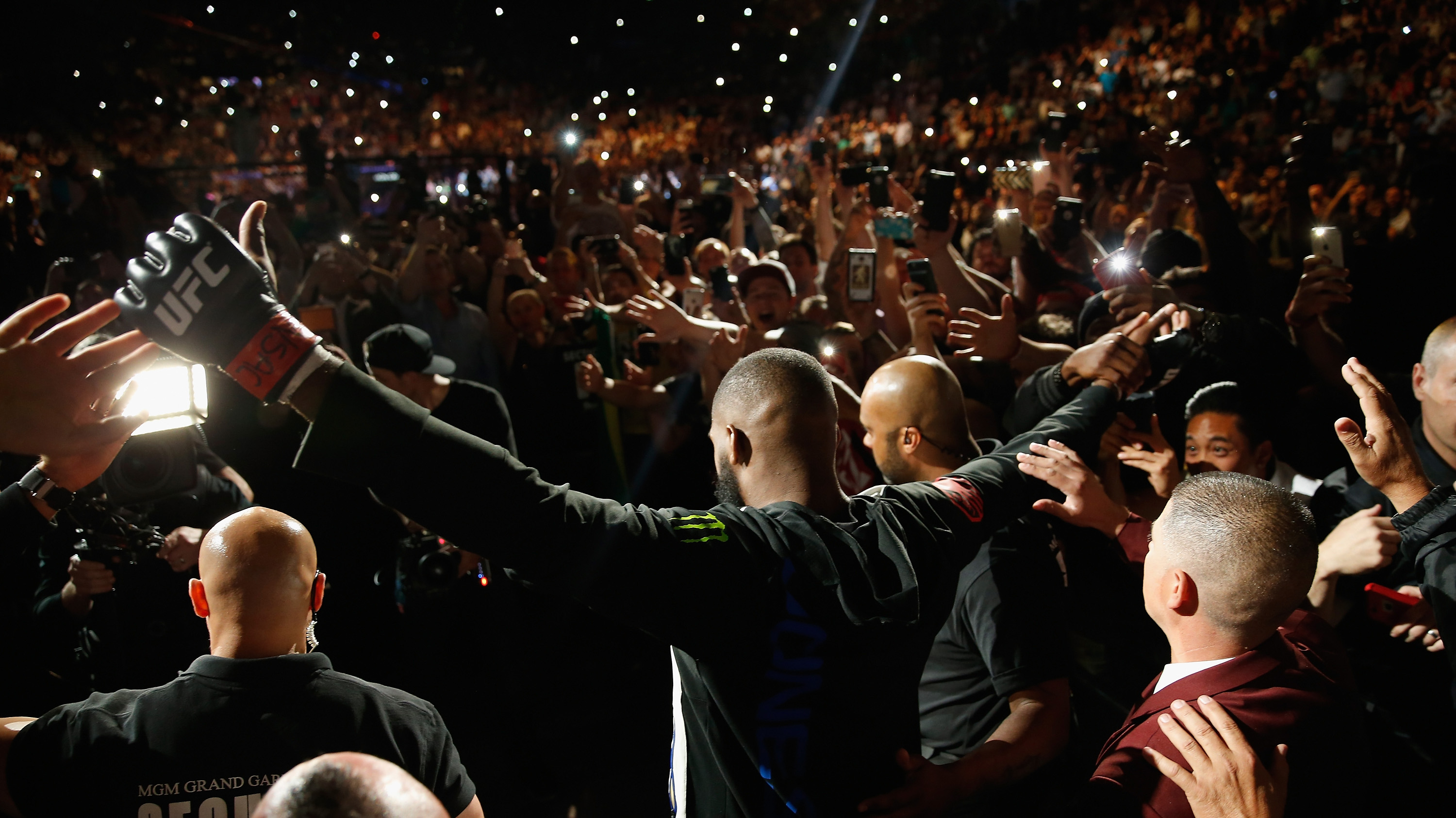 He’s since switched things up, but in the early days of interim light heavyweight champ Jon Jones’ UFC career, it was Poe’s ballad “Angry Johnny” leading “Bones” from the locker room and into the Octagon. On the bizarre meter, this is right up there, but like a lot of eclectic things Jones has done, it found a way to work. Can I make a public call for a return for his UFC 200 rematch with Daniel Cormier??? 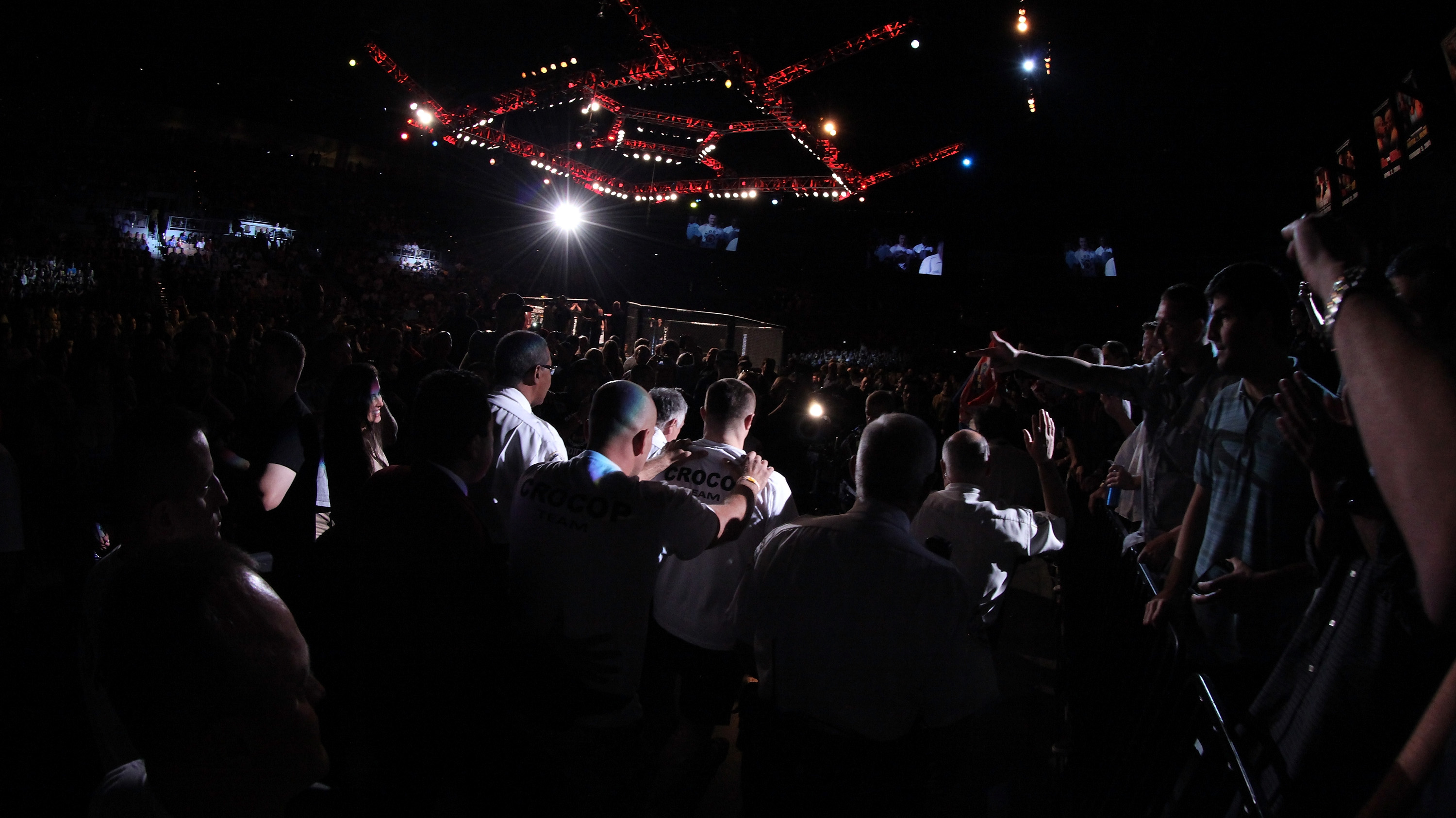 Mirko Cro Cop’s usual walk in song was Duran Duran’s “Wild Boys,” but when the longtime PRIDE star made his UFC debut in 2007, he put that tune aside to pay tribute to his former organization by playing the PRIDE theme by Yasuharu Takanashi. That night, if you thought the crowd was loud before, once you heard the opening strains of the tune, the Mandalay Bay Events Center erupted. 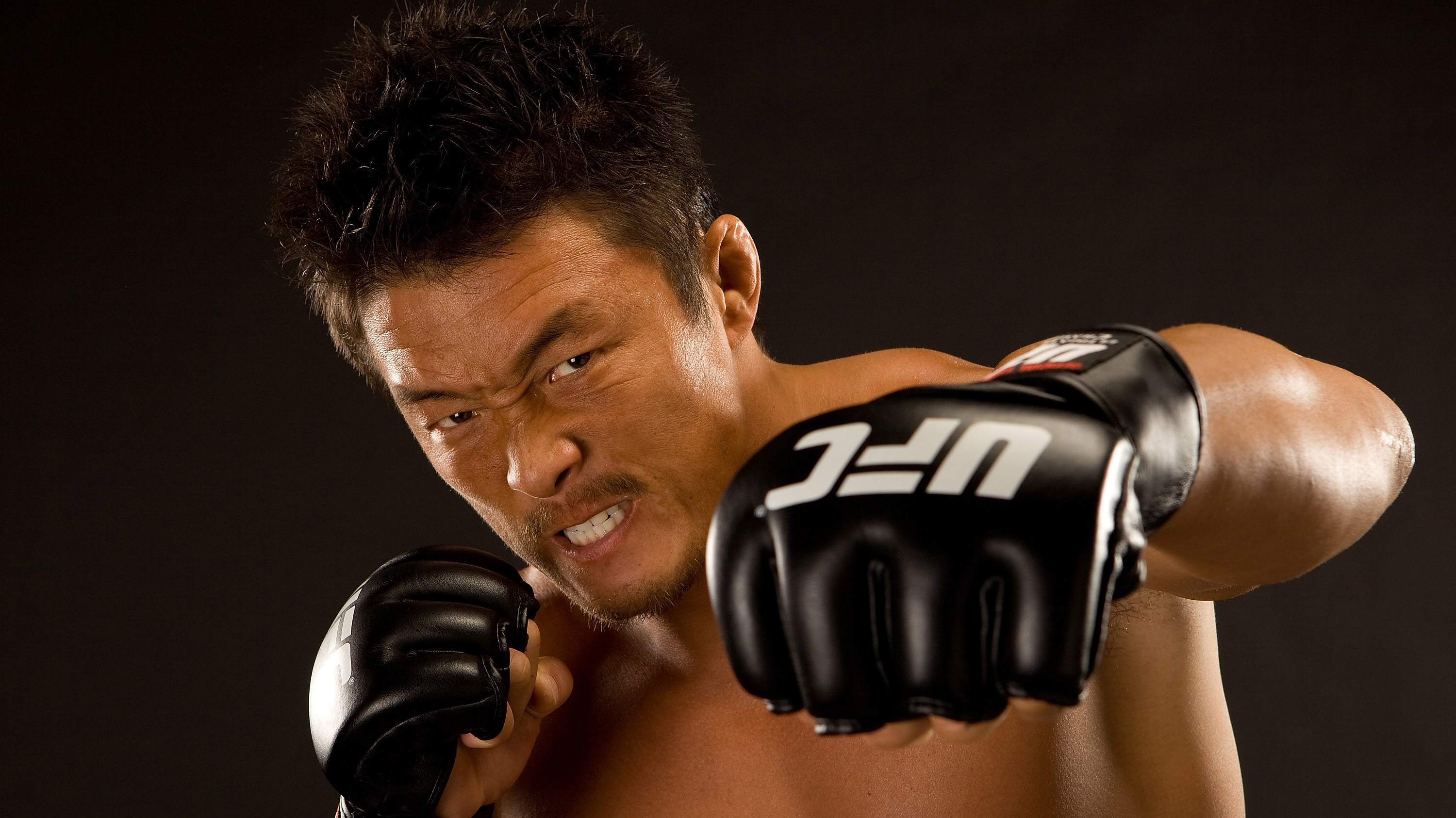 If you never saw Yoshihiro Akiyama walk in to “Time to Say Goodbye” by Andrea Bocelli and Sarah Brightman, you missed one of the best – and odd – entrances ever. It’s that good, that strange, and that good. Did I say how good it was twice? I meant that. 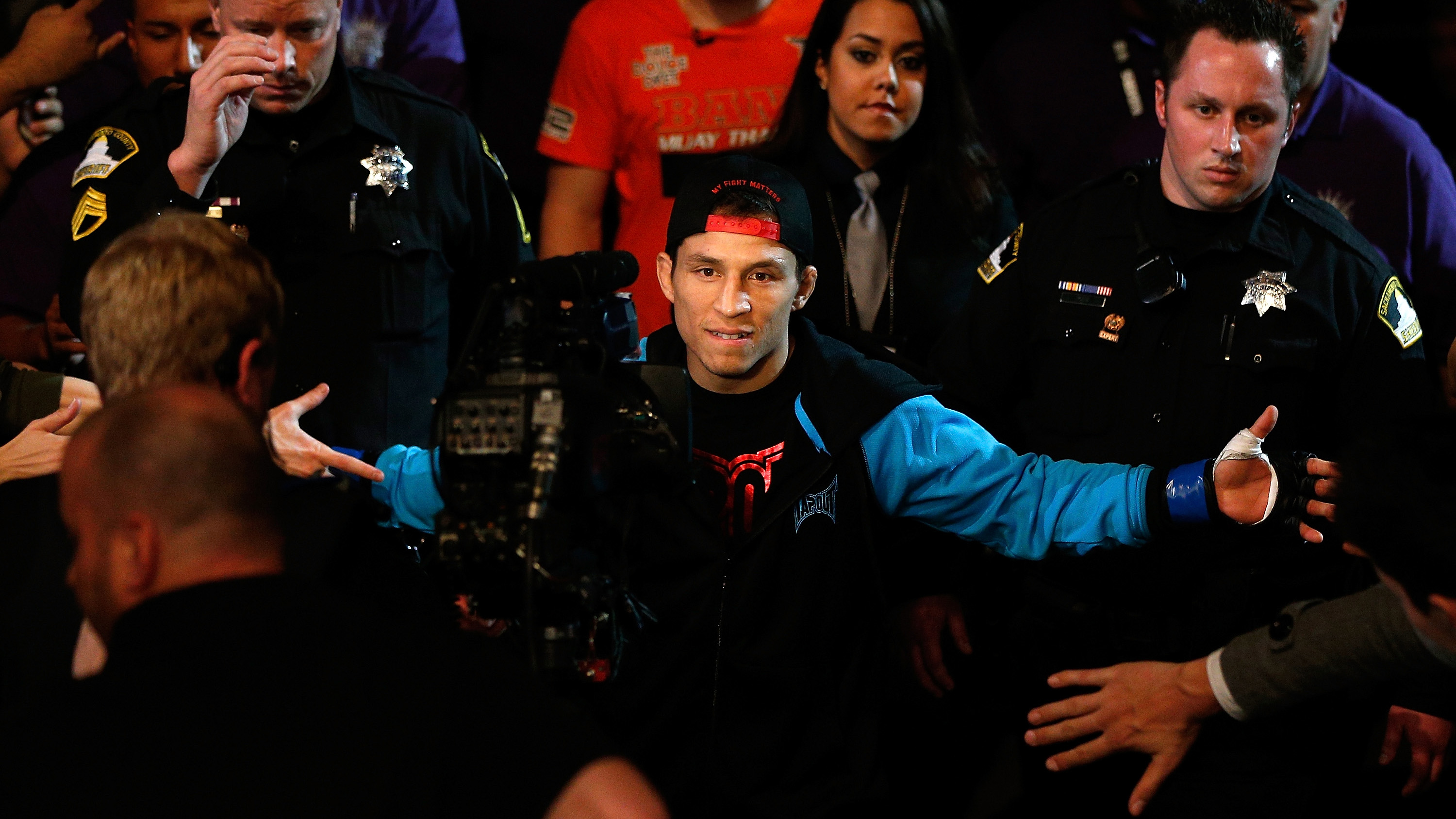 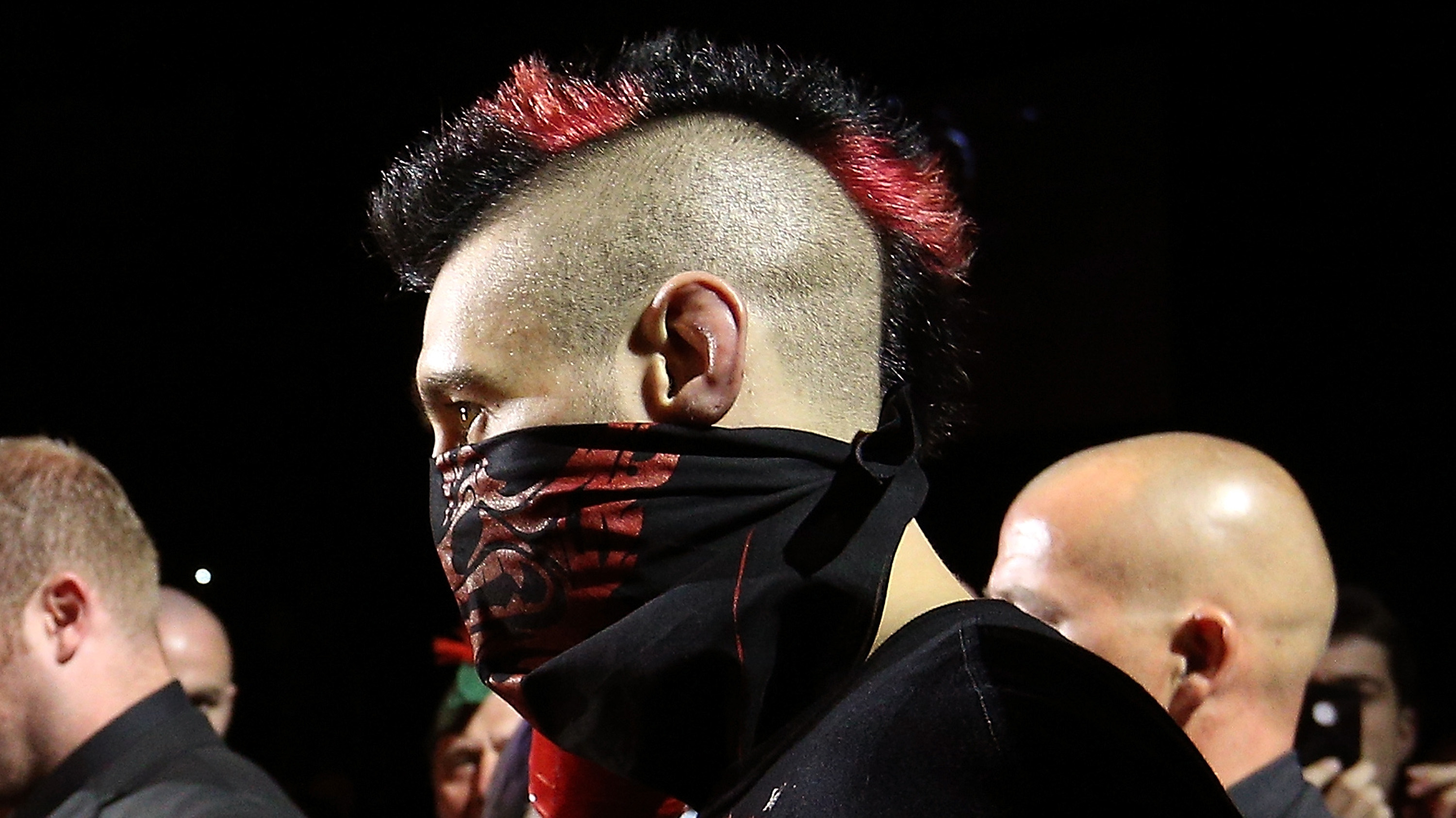 As nationalistic a statement as they come, “England Belongs to Me” by UK punk band Cock Sparrer is a song that almost seems like it was written for UFC welterweight Dan Hardy. And how hard has “The Outlaw” embraced the impossible to forget tune? He even sang on a remake of it with the band. 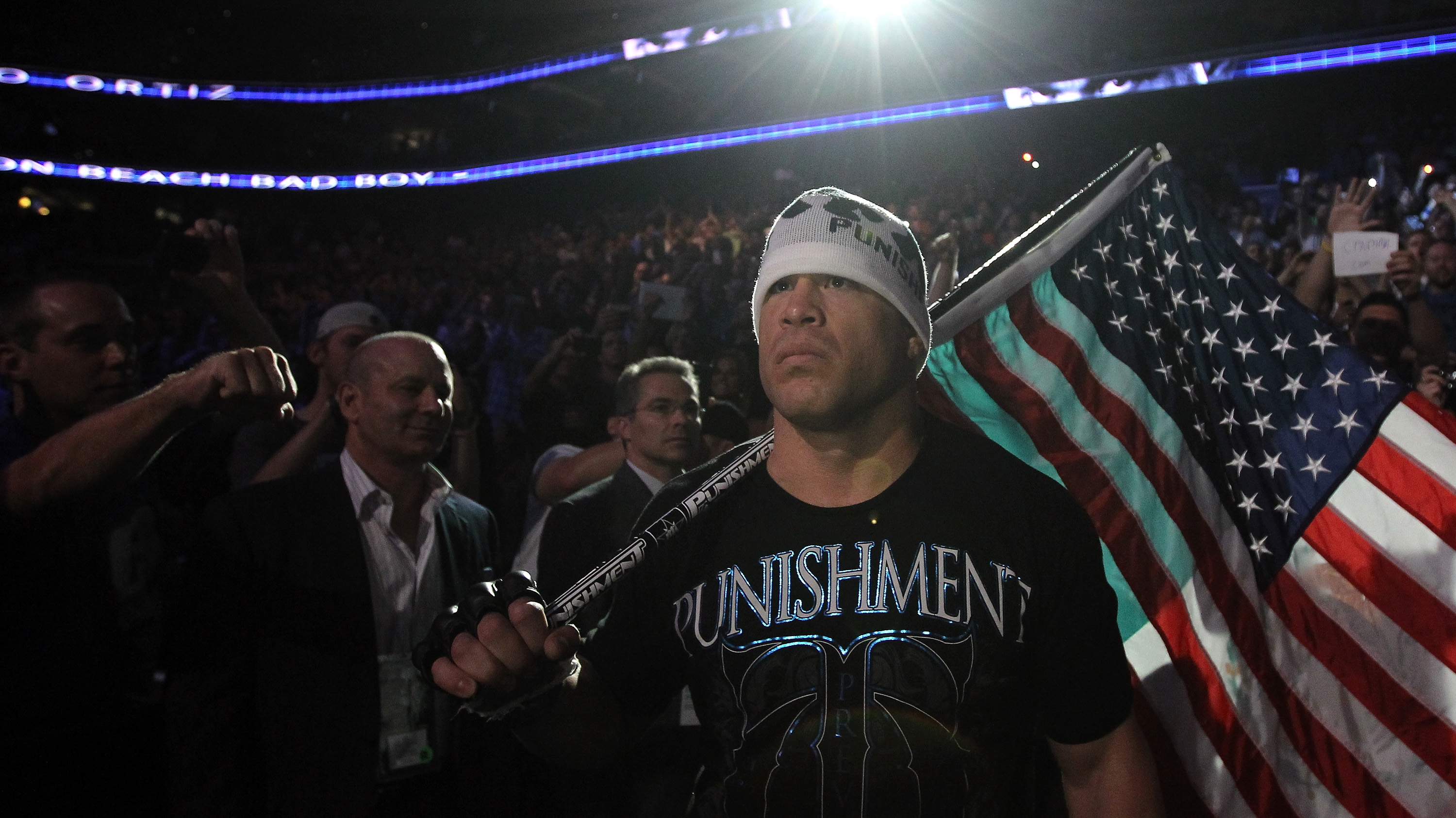 At the time, the most anticipated event in MMA was UFC 40, and when light heavyweight champ Tito Ortiz made his way into the Octagon, it was with all the pomp and circumstance you can think of, complete with Limp Bizkit’s “Break Stuff,” video, lasers, and, of course, pyrotechnics. And if you didn’t get amped up for his fight with Ken Shamrock as he walked down the ramp to the lyrics “Give me something to break,” you’re lying. 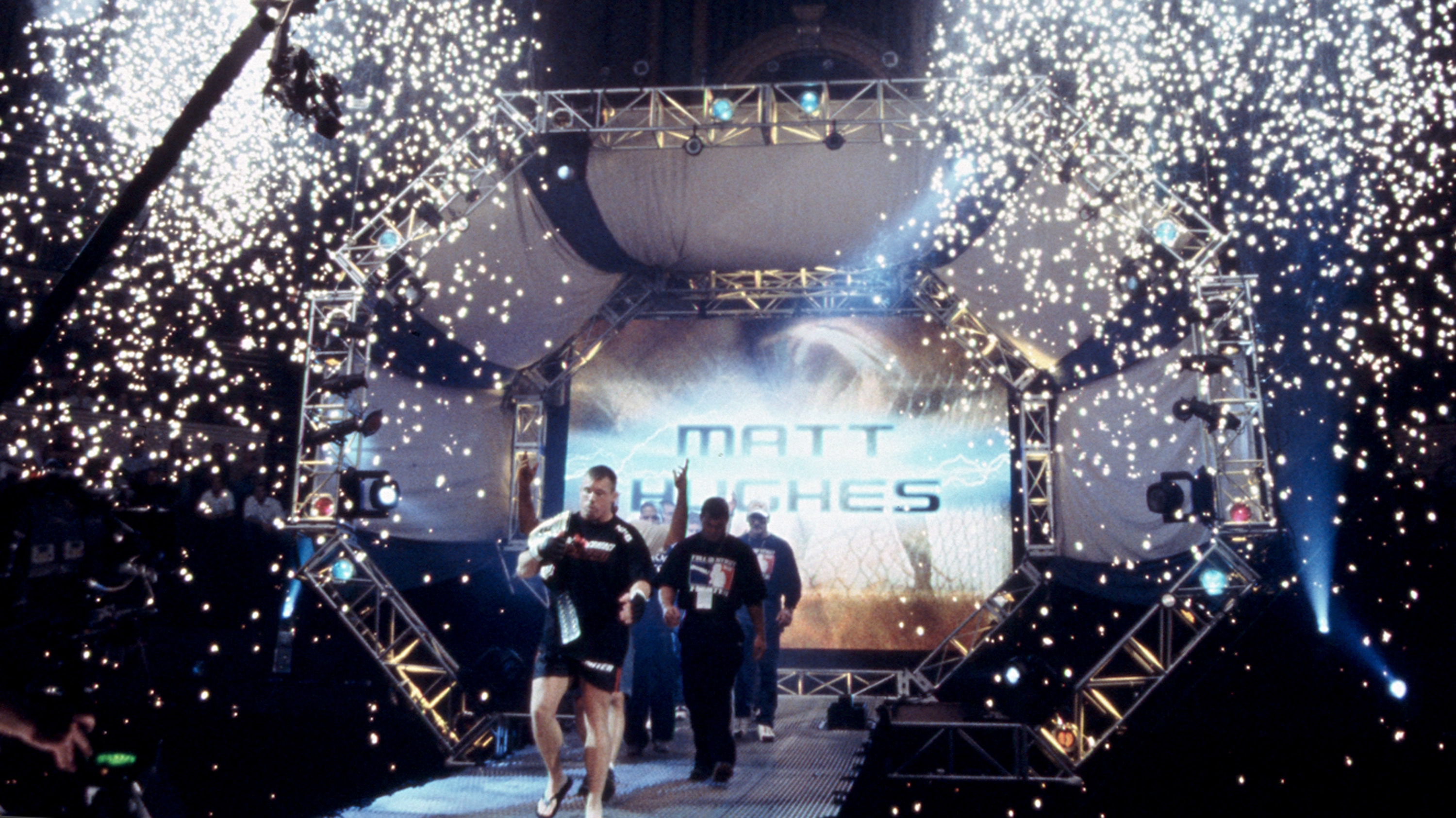 Hank Williams Jr.’s “A Country Boy Can Survive” is another one of those songs synonymous with a fighter, and in this case, it’s two-time welterweight champion and UFC Hall of Famer Matt Hughes. But in addition to Hughes’ choice of tune, what made his entrances great was that once he was in the Octagon, he would stare at his foes with a look that said “yeah, you shouldn’t even be in here with me, and you’re about to find that out.” And more often than not, that country boy from Illinois was right. 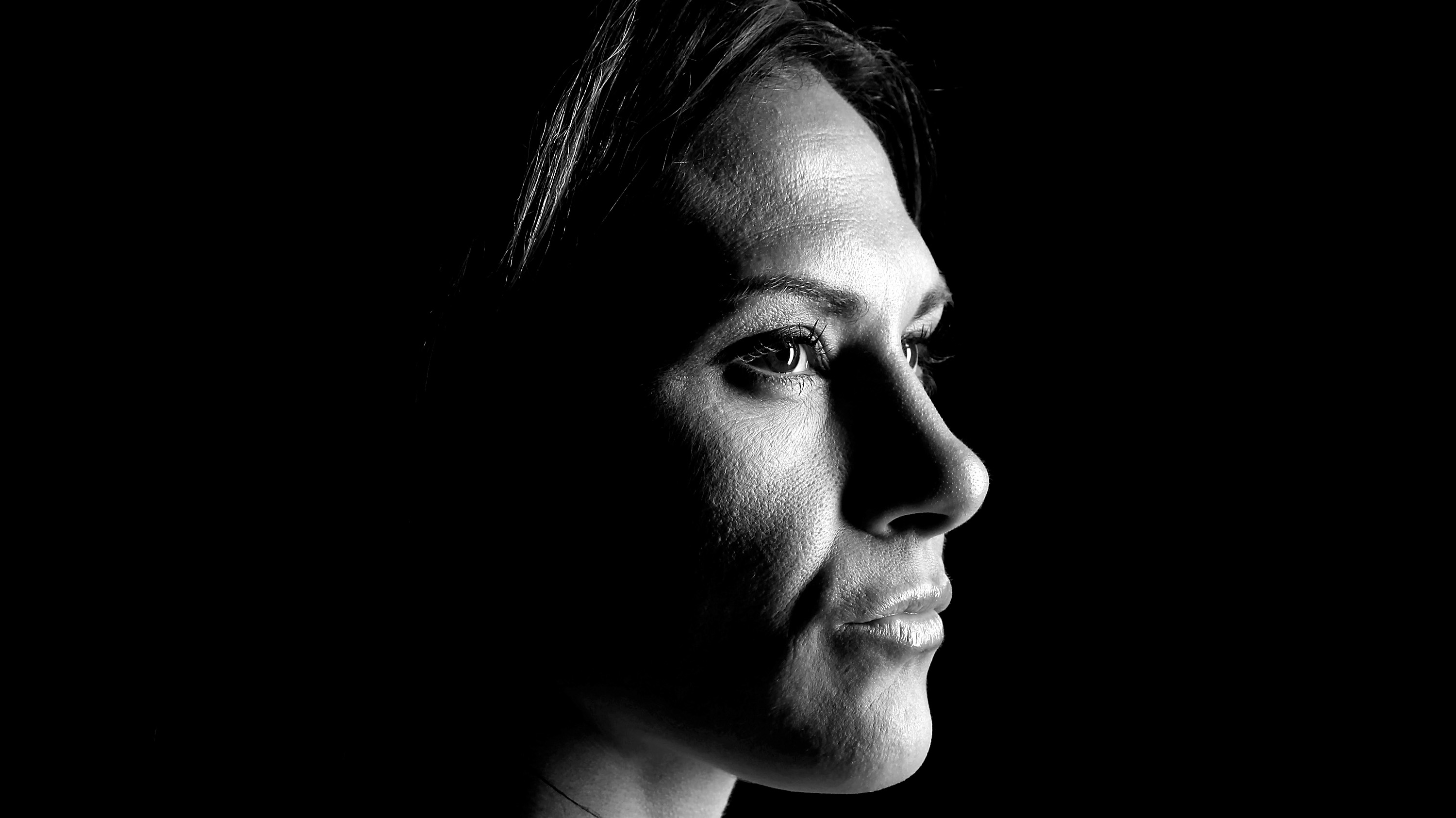 If you asked me what Cat Zingano’s walkout song was for her UFC debut against Miesha Tate, I couldn’t tell you without looking it up (for the record, it’s “You’re Going Down by Sick Puppies). But if you ask me about the walkout itself, it was unforgettable. Fighting is a dream for every fighter, but if you’re a female fighter, it was a dream most thought would never come true until women began gracing the Octagon in 2013. Watching Zingano get taken in by the emotion of the moment was a great thing to see and let the world know just how much being here means to a pro fighter. 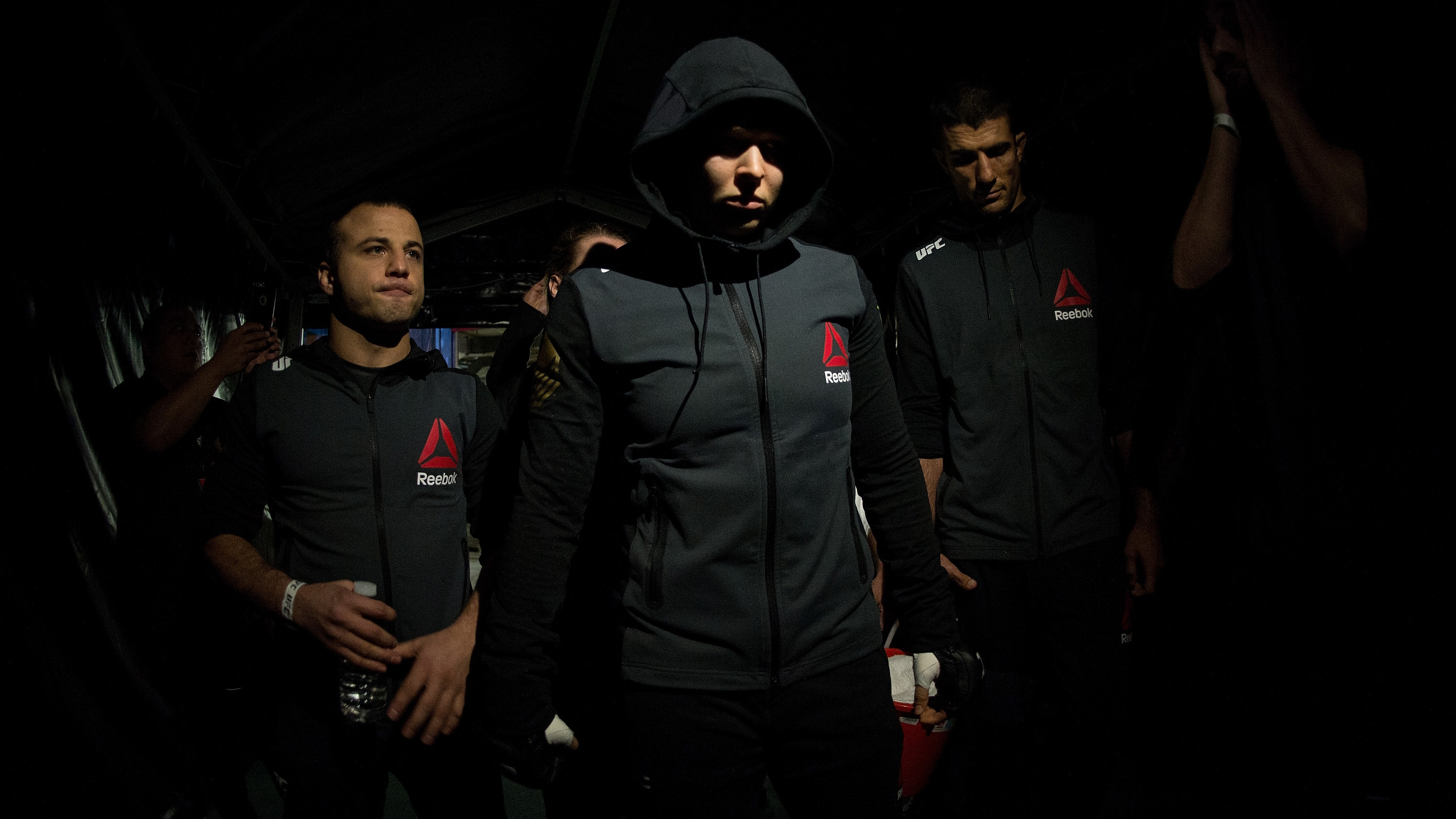 Some fighters will shy away from making bold statements with their entrance theme. Not Ronda Rousey, and the former UFC women’s bantamweight champion has embraced what people perceive her to be with Joan Jett’s “Bad Reputation” signaling her entrance into battle. Great song + great fighter = a perfect mix. 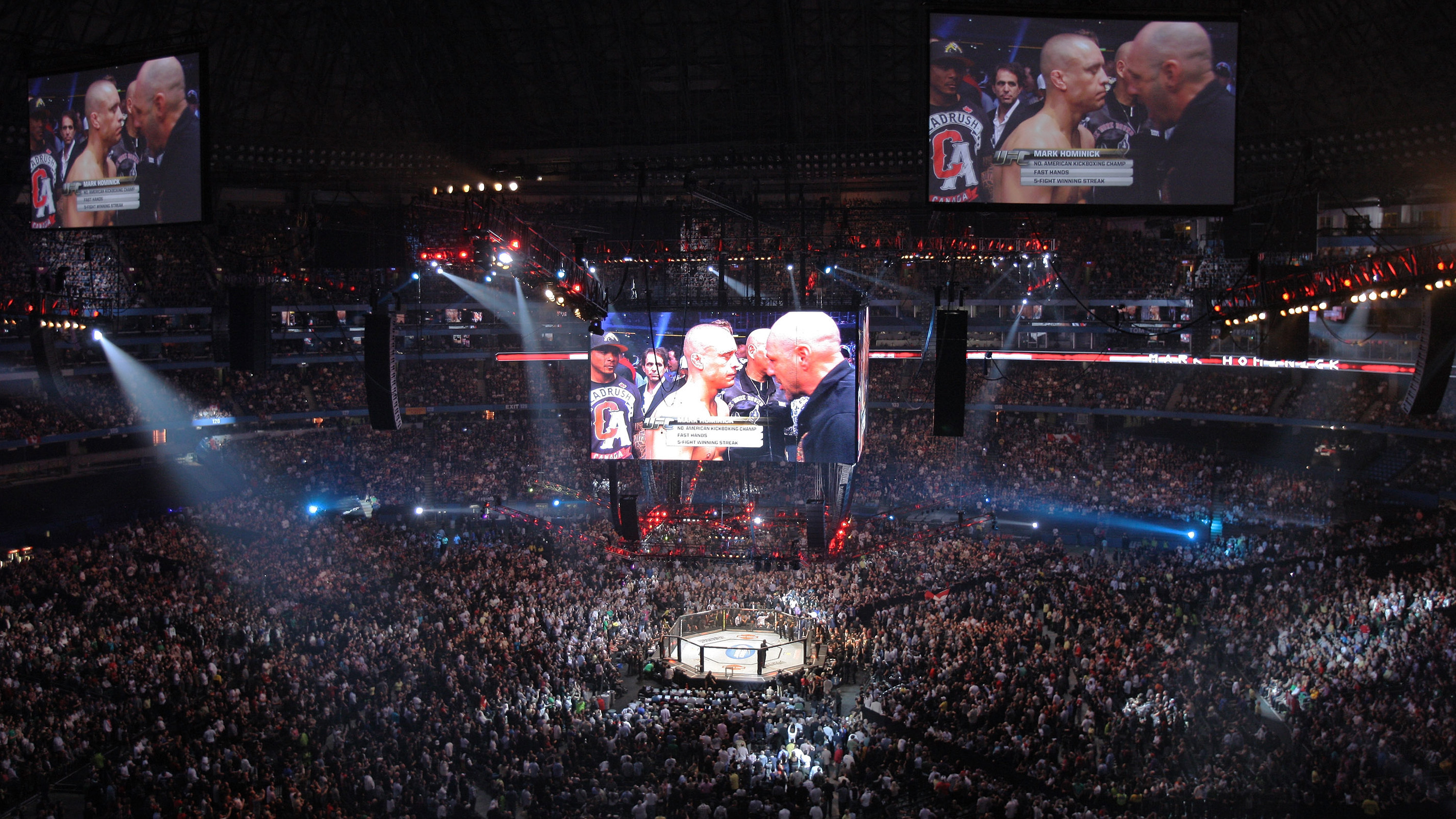 For a while it seemed like everyone and their brother was walking into a fight with Diddy and Skylar Grey’s “Coming Home” blasting from the speakers. But when Mark Hominick used the song for his first fight in his native Ontario at UFC 129, it felt right, especially when over 55,000 fans went nuts as “The Machine” walked into the Octagon and prepared to challenge Jose Aldo for the featherweight title. 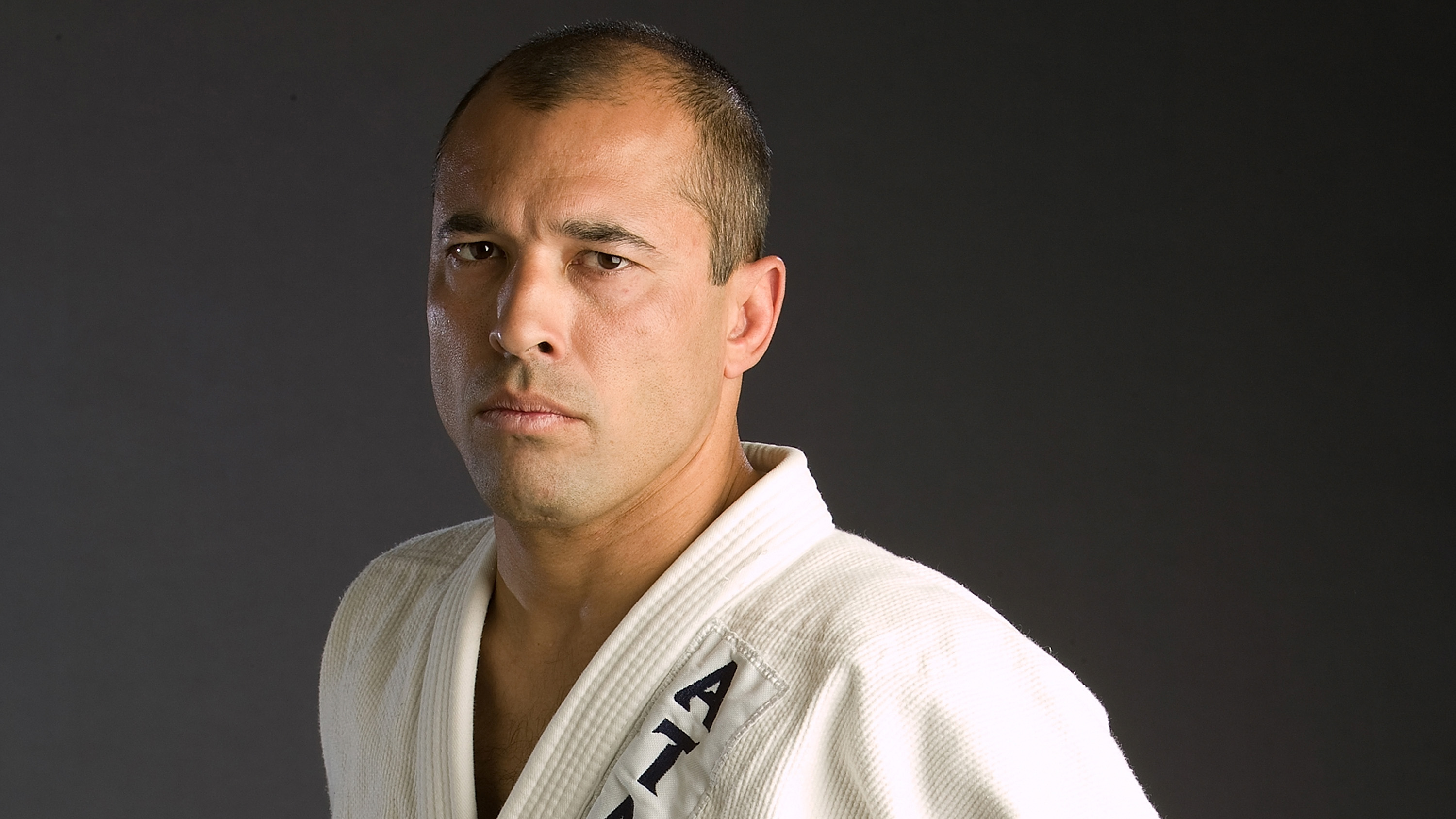 You can probably file this one under “no music necessary,” and that would be completely accurate. When Royce Gracie walked to the Octagon, he wasn’t a fighter alone in the spotlight; he had his family members with their hands on each other’s shoulders walking together as an unbreakable force. Seeing that was powerful stuff, and probably even more so for the ones who had to face the jiu-jitsu legend just minutes later. 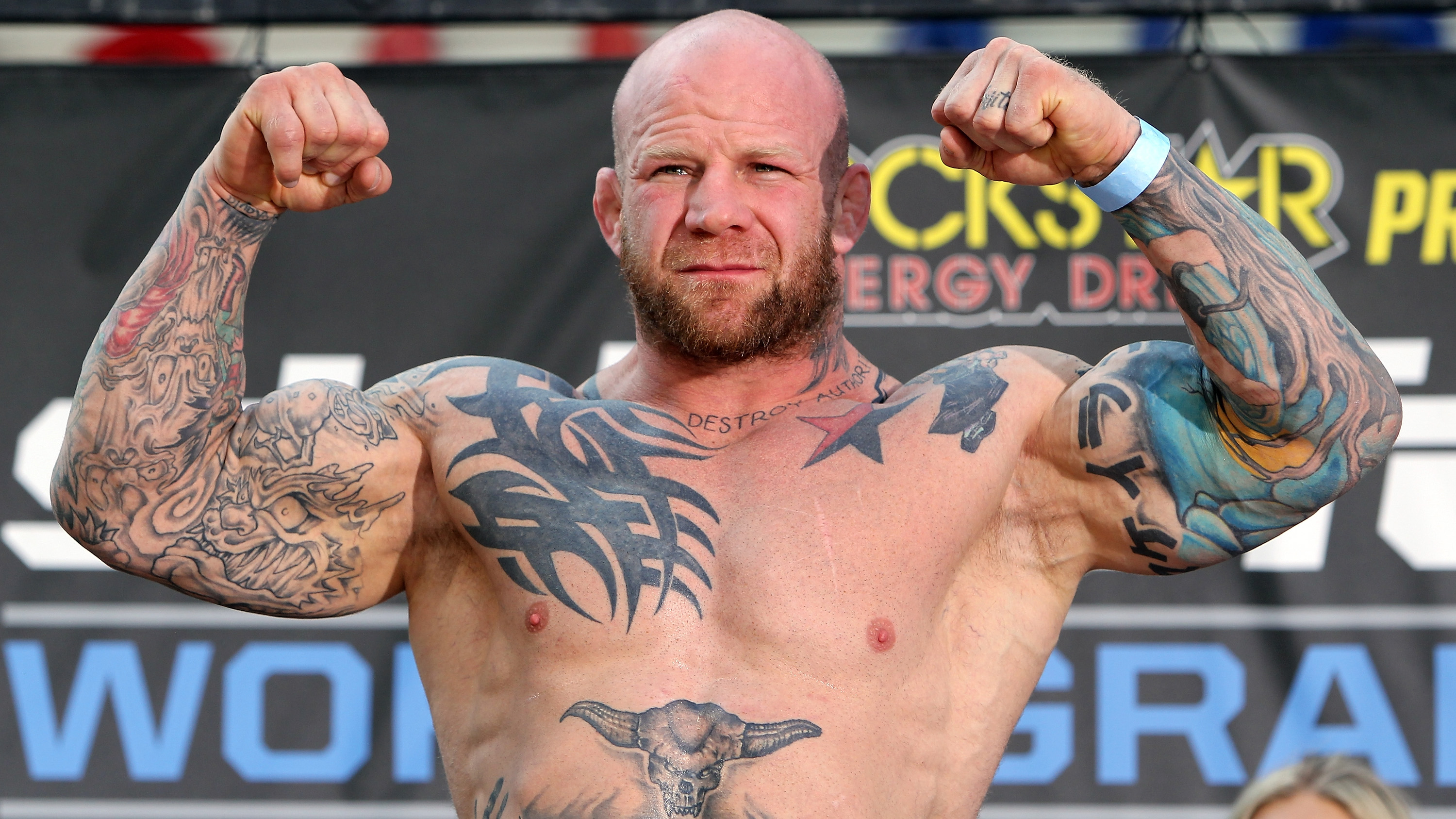 Jeff Monson didn’t win the UFC heavyweight title from Tim Sylvia at UFC 65 in November of 2006, but I’m probably not too far off in suggesting that more people remember him coming in to John Lennon’s “Imagine” than the fight. And while it’s far from the type of song you would ever imagine (pardon the pun) a fighter using as his entrance theme, Monson made sure none of us who heard it would ever forget it. 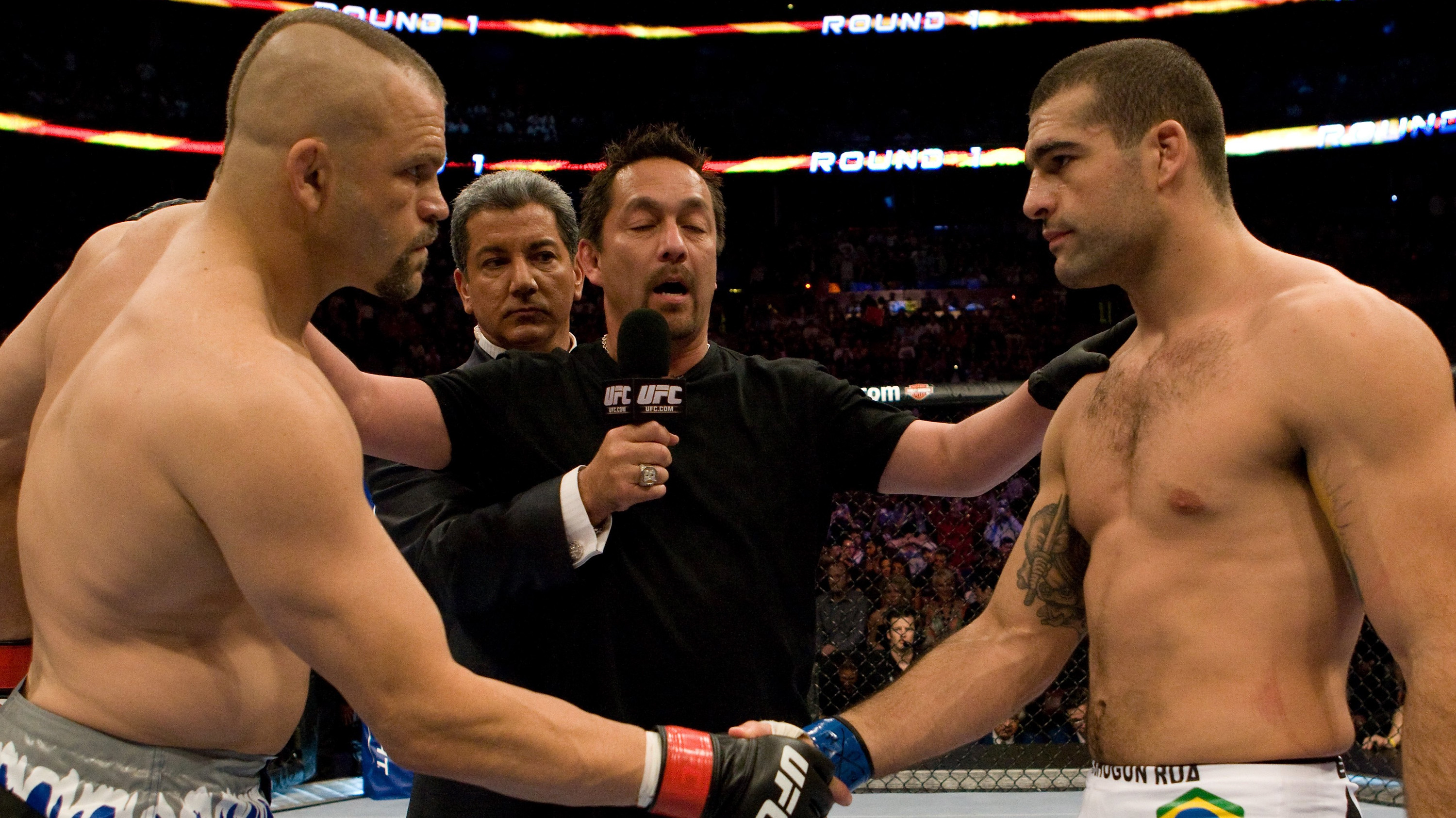 For years, DMX’s “Intro” was Chuck Liddell’s song. In April of 2009, after the future Hall of Famer lost three of his previous four bouts, he decided to switch things up a bit. The result? Slayer’s “Raining Blood” blasted through Montreal’s Bell Centre as “The Iceman” prepared to meet Mauricio “Shogun” Rua, and I will readily admit that I got chills. In 2013, I asked Liddell about this switch, and he said, “We had done the DMX one for so long, and I love Slayer, and I knew I was getting to the end of my career and I wanted to come out to Slayer at least once. That was kind of it too, I was trying to make a comeback, so I thought I’d change it up.” He didn’t win, but he still made plenty of his fans happy that night. 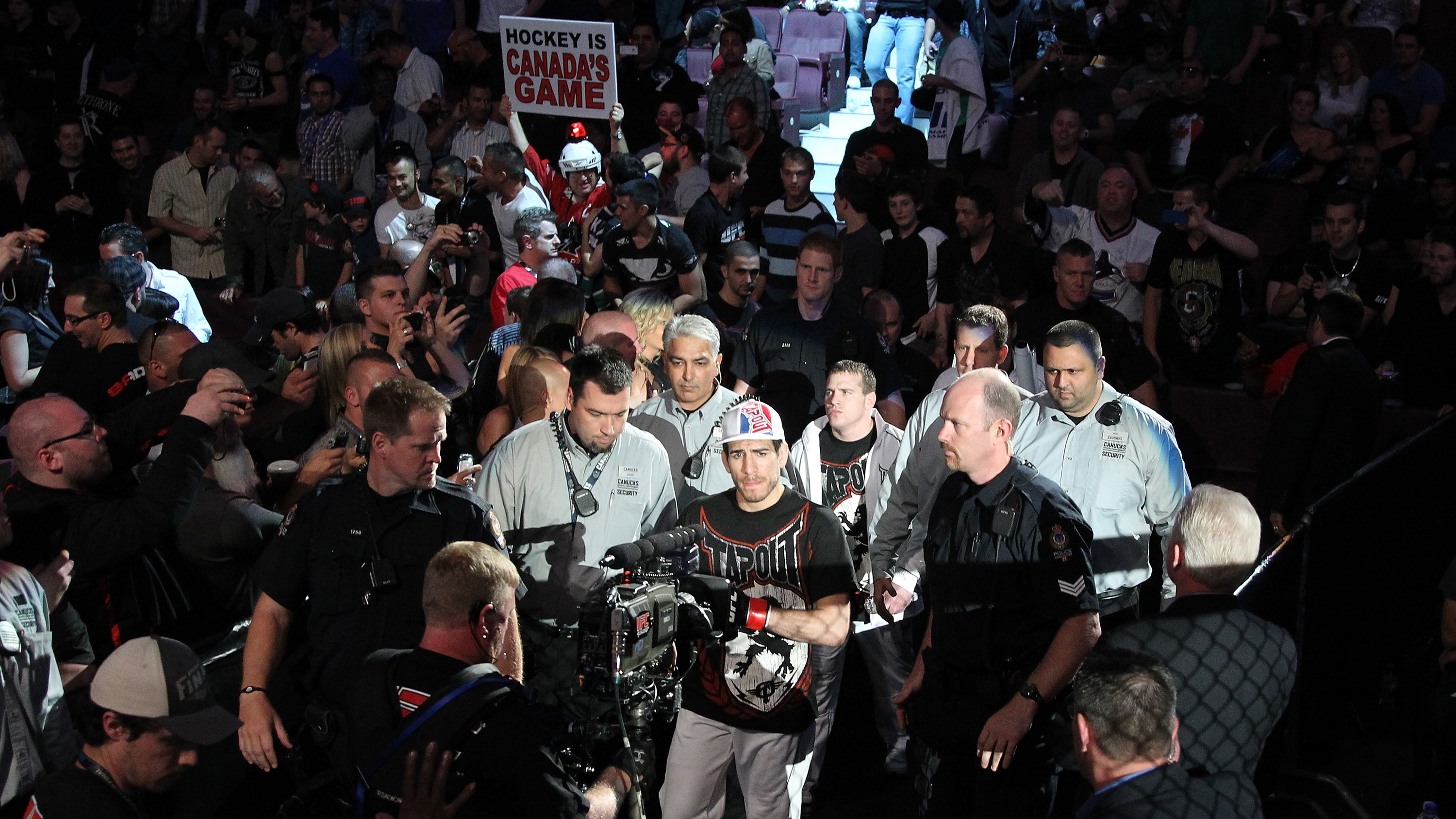 Another entrance I discussed with the man who did it was Kenny Florian’s UFC 64 walk to the Octagon to face Sean Sherk. “Here’s this guy who had a ton of experience, he was one of the top fighters in the world at 170 pounds, and here he is going down to 155,” Florian said of Sherk. “I’d only had one fight at 155, I was going against this monster, and I had this feeling of ‘I’m not sure if I’m gonna get out of this alive.’ (Laughs) It was just that mentality where I was going to give it everything I had and I was prepared to go out like a samurai. That was my mentality heading into that Sherk fight. I’ve always been enamored with the old Clint Eastwood westerns and so I got that song as my walkout song and I walked out as a ronin samurai. I always envisioned doing that at some point in my career if I had an opportunity to fight in the UFC.” Dressed in samurai gear, Florian marched through the crowd while Ennio Morricone’s “Ecstasy of Gold” (from The Good, the Bad and the Ugly) played, and it was without a doubt in my mind the best UFC entrance ever. And while I can hear arguments for others, I won’t be swayed.