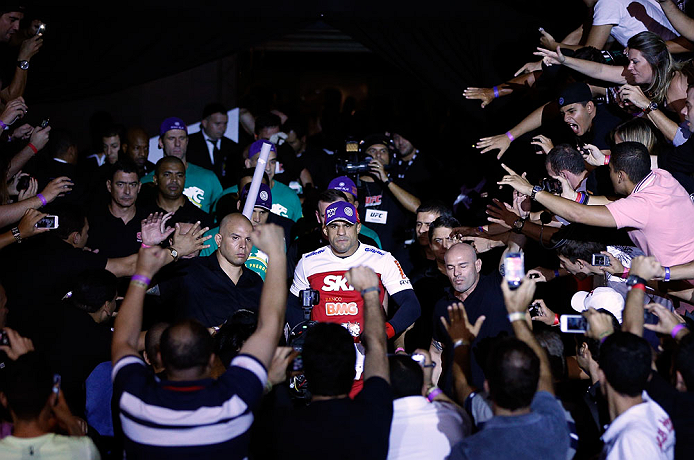 Every fighter has his or her own rituals in the moments preceding a fight. Some prefer to remain silent, focused only on their opponent; others choose to relax and get over the jitters. Some like heavy music to get in the mood for the fight, and others slow songs to clear their mind. The only thing that’s certain about it is that the entrance is a relevant moment that usually reveals some aspects of an athlete’s mindset.

On our countdown to UFC Sao Paulo, we’ll revisit moments that highlighted previous events in the city in a five-piece retrospective. In this chapter, let’s look at the top five entrances.

January 2013 - Vitor Belfort vs Michael Bisping (Watch on UFC FIGHT PASS)
It doesn’t matter how many years of experience you have, sometimes the jitters before a fight will always be there. When he faced Michael Bisping in 2013, Vitor Belfort entered the arena having a long conversation with himself, taking deep breaths and showing great concentration for the fight he would soon win by knockout.
COUNTDOWN TO SAO PAULO: PART 2 - Top 5 Faceoffs | Part 1 - Top 5 Celebrations

May 2014 - Paulo Thiago vs Gasan Umalatov (Watch on UFC FIGHT PASS)
A member of the Special Forces Unit of the Brasilia Police, Paulo Thiago was always a very serious and focused fighter going into his fights, and as he marched into battle against Gasan Umalatov in 2014, he didn’t show any emotions and hardly blinked.

May 2014 - Stipe Miocic vs Fabio Maldonado (Watch on UFC FIGHT PASS)
One of the most charismatic athletes that has been in the Octagon, Maldonado took the tough task to replace Junior Dos Santos on short notice in the main event of UFC Fight Night in Sao Paulo in 2014 and had his effort recognized by the crowd. The Sao Paulo state native had a warming and noisy welcome on his way to the fight against the current UFC heavyweight champion. 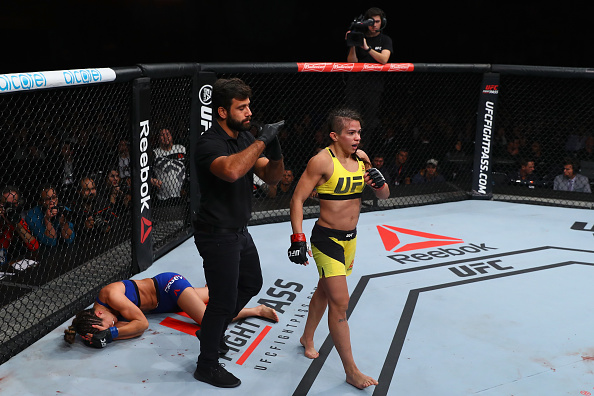 November 2016 - Claudia Gadelha vs Cortney Casey (Watch on UFC FIGHT PASS)
Coming off a loss in a rematch for the UFC strawweight title against Joanna Jedrzejczyk, Claudia Gadelha was anxious to step right back in the Octagon and move on with her life and she made that clear when she ran straight to action with the same excitement and intensity that gave her the win over Cortney Casey that night.