Only athletes and their teams truly know all the effort put into a training camp, but fans can have a little taste of what it means to them when they celebrate after a big win.

On our countdown to UFC Sao Paulo, we’ll revisit moments that highlighted previous events in the city in a five-piece retrospective. In this chapter, let’s look at the top five celebrations.

January 2013 - Vitor Belfort vs Michael Bisping (Watch on UFC FIGHT PASS)
Right after his loss in a light heavyweight title bout against Jon Jones, Vitor Belfort moved back to the middleweight division in a main event against Michael Bisping on the first fight night in Sao Paulo in 15 years. In front of a crowded Ibirapuera Gymnasium, the “Phenom” knocked out the current middleweight champion and drove the fans insane.

May 2014 - Warlley Alves vs Marcio Alexandre (Watch on UFC FIGHT PASS)
On the Octagon’s next trip to Sao Paulo we met the finalists of the third edition of TUF Brazil, and in the middleweight showdown between Warlley Alves and Marcio “Lyoto” Alexandre, the former made a strong UFC debut, submitting the latter with a guillotine choke and making clear that the “Slingshot” was finally where he belonged. 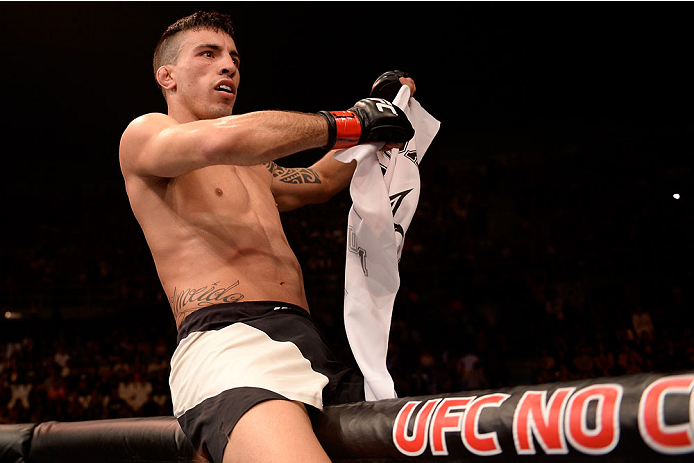 November 2015 - Thomas Almeida vs Anthony Birchak (Watch on UFC FIGHT PASS)
Hired in 2014 as a top Brazilian prospect, Sao Paulo native Thomas Almeida was already 3-0 in the Octagon when he was scheduled to fight in his hometown in 2015. The presence of his family and friends in the audience certainly didn’t hurt Almeida, who had a memorable performance, knocking out Anthony Birchak and pointing out at the end that it was his fourth win in the UFC.

November 2015 - Thiago Tavares vs Clay Guida (Watch on UFC FIGHT PASS)
Thiago Tavares was coming off a loss when he was scheduled for a tough matchup with fellow veteran Clay Guida. The Brazilian had moved down to the 145-pound division and was knocked out by Brian Ortega in his previous showing, but he redeemed himself in Sao Paulo, submitting the “Carpenter” in less than 40 seconds. It more than explains his post-fight reaction, right?

November 2016 - Johnny Eduardo vs Manny Gamburyan (Watch on UFC FIGHT PASS)
Another veteran who was in need of a dominant showing was Johnny Eduardo. Haunted by a series of injuries, the Brazilian fought only four times in over five years under the UFC banner, and was coming from a loss to Aljamain Sterling when he faced Manny Gamburyan in 2016. Making a case for the “Muay Thai” tattoo on the belly, Johnny knocked Gamburyan out in the second round and jumped out of the Octagon to share his emotional moment with his teammates.