The Countdown to Rockhold-Bisping Begins 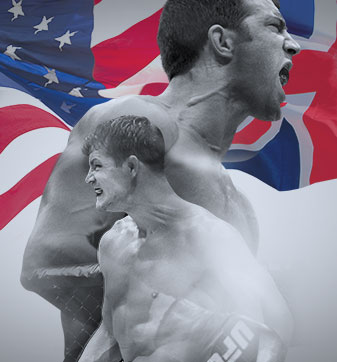 Michael Bisping has never been one to mince words.

The middleweight contender has seemingly made a career of rubbing other fighters the wrong way. Often backlash against the brash Brit is the result of very pointed comments towards other competitors. When he's at his trash talking best, he can burrow himself under an opponent's skin with relative ease.

As a result, the bulk of his fights in the 185-pound division have been preceded by heated exchanges fueled by bad blood.

So it shouldn't be a surprise to anyone that the lead up to his forthcoming bout with last-reigning Strikeforce titleholder Luke Rockhold has been typified by yet another war of words. When the top middleweights hopped on a media call Tuesday, it didn't take long for them to butt heads.

“You've got to treat people the way you want to be treated,” Rockhold told reporters. “It seems like he's a p***k everywhere in life. I don't know what he's not happy about, but I'm looking forward to making everyone else happy.”

“Luke, I don't know you and I don't care for you,” a fired up Bisping responded. “We haven't shared a single proper conversation. So you're basing your facts, or what you presume as facts, on absolutely nothing, on fresh air.

Bisping and Rockhold will settle their grudge in the main event of UFC Fight Night 55 at the Allphones Arena in Sydney on Sat., Nov. 8. Due to the time difference, the card will stream on UFC Fight Pass in North America on Nov. 7.

Though the two have yet to face each other inside the octagon, their beef stems from a sparring session in 2012. Afterwards, Bisping boasted about getting the better of Rockhold, going so far as to proclaim himself the “unofficial Strikeforce champion.”

He later apologized, stating the remark was made in jest, but said Rockhold needs to develop a sense of humour.

“You can't live your life regretting every comment that you've made,” Bisping said. “I made a light-hearted remark and it was a joke. If he had a sense of humour he may have got that joke, because I thought that was a pretty good line.

“Was it a little bit disrespectful? I suppose it was. That's why I instantly apologized. Do I regret it? No, I don't regret it. I certainly got a good laugh out of it at the time.”

A calm Rockhold said he hasn't let Bisping's words get to him, but admitted he's looking forward to settling the score.

“It's definitely a bonus to shut his mouth and set the record straight on that note,” Rockhold said.

“I don't like the guy. I'm going to voice my opinion and sell the fight. I'm competitive as a person, whether we're talking or fighting. I'm not going to lose at all to this guy.”

Though bragging rights are on the line between the two, their upcoming tilt will have serious implications in the middleweight division.

Currently ranked No. 5, Rockhold aims to make a case for a shot at the winner of next year's championship fight between Chris Weidman and Vitor Belfort. Following a KO loss to Belfort in his promotional debut in 2013, the American Kickboxing Academy fighter has netted consecutive stoppage wins over Costas Philippou and Tim Boetsch. He also holds a notable decision victory against top contender Jacare Souza, which earned him the Strikeforce belt in 2011.

Rockhold knows there's a lot riding on his fight with Bisping. He may have nothing but contempt for the Brit, but said he won't let emotion get the better of him when the cage door shuts.

“If you want to see me emotional, go back and watch my Belfort fight,” Rockhold said. “In the lead up, I was pissed. I was emotional and you could see it in my eyes. Now I'm very comfortable and relaxed. It's never going to happen again. I'm never going to let emotions get the better of me.

“Michael's good — I can't take that away from him. He's technical. He's got good footwork and a lot of movement. He throws off a lot of people because he's always moving. He's constantly circling away from the power. He knows what he's doing on the feet.”

Meanwhile, Bisping, who sits at the No. 9 spot, looks to keep the ball rolling after his impressive destruction of Cung Le in August. Though a victory over Rockhold would only mark his second since dropping a unanimous decision to Tim Kennedy this past April, it would put Bisping back in the title mix, a position he's all too familiar with.

Bisping's been close to reaching No. 1 contender status over the course of his middleweight stint, but has struggled to get over the hump. Despite suffering a slew of setbacks in the past, Bisping said he's still among the division's elite.

“The fact that I've been there so many times is a testament to my fighting ability, character and will to win,” Bisping said. “I've been there several times, but most people only get there once. I've dusted myself off and come back a better fighter. I've truly learned from all my losses. I'm still as hungry as the first day I put a pair of gloves on. I still want to be world champion. I know I can do it. I'm physically in my prime and mentally I'm better than ever.

“I still dream of being world champion and that all starts next weekend. I'm one of the top guys. I've been here a long time and I'm not going anywhere.”

It goes without saying that failure is not an option in either fighter's mind.

From Rockhold's perspective, he's about to put on a clinic at Bisping's expense.

This, of course, set up yet another trademark Bisping comeback.

“There's insight for you,” Bisping chimed. “He can grow slightly better facial hair, so he's the bigger man and going to win the fight. Good on you, Luke.”