From Costco to UFC, Glenn's fighting dreams have become reality

Life is good for Rick Glenn as 2017 comes to a close. He’s won two of his three UFC bouts since joining the roster in 2016, he’s got a big fight against Myles Jury next week at UFC 219 in Las Vegas, and he and his wife have settled in to their home in Sacramento, far removed from the Midwest winters that framed most of his 28 years.

“I’m kind of forgetting about the whole winter thing,” laughed Glenn as he soaked in the sun in Northern California. What he hasn’t forgotten is what it took to get here. Before he got the call to the UFC for a short-notice bout against Evan Dunham last September, he was in that no man’s land many vets find themselves in. He was good enough to be in the big show, but the phone wasn’t ringing.

“Right before I got signed to the UFC last September and got the short-notice call, I was working at Costco in the tire center as a backup supervisor and I wasn’t get much feedback from the UFC on their interest,” he said. “I had just left World Series (of Fighting) in the hopes of getting to the UFC, and in the back of my head, I always knew I’d fight in the UFC, but reality was kind of setting in. In the bigger picture, I needed to make sure I could make a living and provide for my family, so I was really questioning it.” 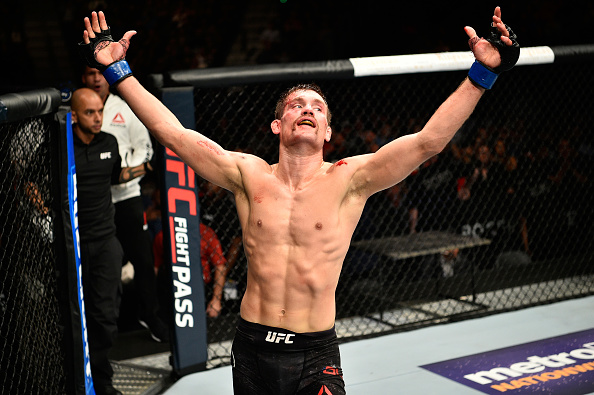 I tell Glenn of being on a New York City subway train last weekend and seeing two young musicians deliver a pitch perfect rendition of the Beatles’ “Norwegian Wood.” The only thing that popped into my head was the question of why this talented duo wasn’t on a big stage somewhere and not playing on the F train. It reminds me of Glenn’s dilemma and I ask him if there’s a worse feeling than knowing you’ve got the talent to compete with the best but not the opportunity.

“It’s one of the worst feelings,” he said. “I had been training well over 15 years and fighting over 11 years, and you put in all that time and energy, and you’re visualizing every day – ‘You’re gonna be in the UFC someday, keep fighting, keep going.’ Then you have setbacks and it can be pretty heartbreaking for some people if they don’t get there.”

Glenn made it, and if there’s a certain intensity to him when he fights, that’s not by accident. For him, every trip to the Octagon is a fight for his job and his future, and that was never more evident than when he issued a punishing defeat to previously unbeaten Gavin Tucker in September. It was a one-sided bout punctuated by calls from fans, media and Glenn himself for referee Kyle Cardinal to stop the fight, but it went the full 15 minutes.

“I looked at the ref a couple times, like ‘Hey, stop the fight,’” Glenn recalls. “It wasn’t necessary to keep it going. But it’s just part of the business.”

A business in which Glenn was reminded that to avoid being the one on the other side of a fight like that, he’s got to put the time in at the gym and be completely focused.

“I don’t want to go home with a bunch of bumps and bruises or have long-term effects on me,” he said. “I know the guys I’m fighting are coming to kill, so it’s either me or them.”

In an odd way, the post-fight talk about the lack of a referee stoppage in the Tucker fight put Glenn on the map, making it one of the most important of his 25-fight career.

“I’d say so. Every fight coming up is the most important, but I was definitely overlooked in my last fight. Tucker was a really good opponent, everyone was hyping him up to be one of the next contenders, and I took him out pretty well. The experience I have and the pace and Octagon IQ, I definitely got a lot of buzz from that. Maybe I should have put a little more on it, and it would have been nice to get the finish, but I came away with the win and that’s the number one thing.”

Next up is Jury, and Glenn is ready. He always is. It’s the mindset that comes from coming up the hard way. I joke with him, saying his main motivation is never having to shovel snow again. He laughs, and while he agrees to an extent, it’s not the only thing he’s never going back to.

“I want to make the most out of my life and the most of the time I’ve invested in the sport. I want to take it as far as I can go and do the best I can do.”