Costas Philippou Sticks to His Guns 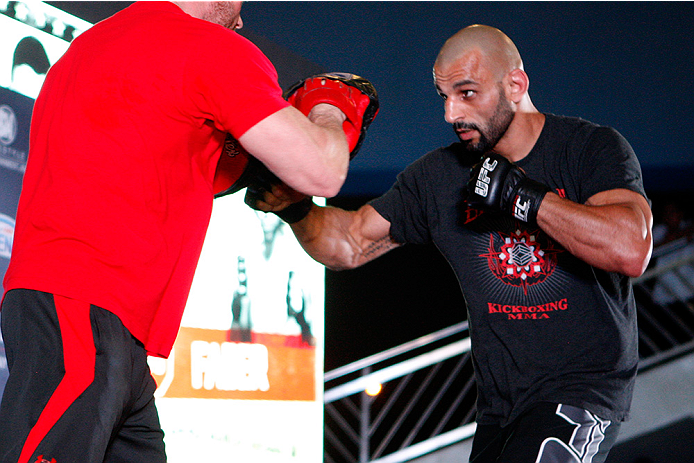 The ritual never changes for Costas Philippou. Through 18 pro MMA fights the Cyprus native goes through the same thing before every bout, only to change gears when the match is over.

“Why am I doing this again?” he explains, revealing the thoughts that run through his head on fight day. “I’m going to finish the fight and that’s it, I’m going to retire. Then you punch a guy and you win or you lose, and you think ‘I’ve got to come back because I lost or you win’ and you go ‘that was exciting, I’ve got to do one more.’ You forget about all the torture you through to get there and you want to do it again. One more, one more, it’s been ten years of one more.”

Philippou laughs, knowing that it’s going to be the same thing on Saturday when he faces Gegard Mousasi in the UFC Fight Night co-main event in Manila. He’s been on the sidelines for slightly over a year, he’s had to heal up a broken rib along with some other injuries during that time, and when he was approached about facing Mousasi, he was excited, at least until he found out that he had to travel halfway around the world to do it.

“Actually, that was the thing that made the decision hard, the trip to the Philippines,” he said. “I probably went to over 30 countries in my life, so I’ve traveled a lot, and a flight of 20-plus hours, no matter what, even if you’re going on vacation, is not enjoyable. But the fact that it was a co-main event and it was Mousasi made it worth it. I said I’ll suffer a little bit with the flight, and it was worth the trouble. It made it a little easier.”

Of course it does. It’s a high-profile fight against a respected contender who can move Philippou up from his current spot in the middleweight rankings at 12. It’s the type of opportunity most fighters dream of. But Costas Philippou is not most fighters.

“Everybody fights for different reasons,” he said. “I fight, obviously for the money, but I want to enjoy what I do. I don’t care about the publicity and the fame. People want to stay busy so they stay relevant and the fans won’t forget them because they still want to be famous. I know everybody likes money, but believe it or not, most of the fighters fight because they want to be famous. I’m not one of them. So if I feel if my body can’t take it, I’d rather stay on the sidelines and let everybody forget about me. I do this because I’m having fun and I’m going to stop as soon as it stops being fun for me.”

But what if he beats Mousasi in spectacular fashion, gets put in line for an even bigger fight in a couple months but he decides that it isn’t fun anymore? Does he still walk away, knowing that it could cost him an eventual shot at the championship should he keep winning?

“It’s not going to change anything,” he said. “I could fight Mousasi and knock him out and if I think that it’s time to step away, I’ll say thank you and go away. The title was never a goal for me. I don’t really care – it’s just a belt, more fame and more troubles. Yes, the money comes with it, but I’m not sure it’s worth it because your life will never be the same. I can’t lie, it would be nice to fight for the title and win, but I’m not going to change everything just because I might get a title fight. If it’s not fun and I don’t enjoy going to the gym, I’ll move on to the next chapter in my life.”

The crazy thing is, you believe him when he says that. At 35, Philippou isn’t a brash 20-year-old trying to attack the world through his performances in the ring or Octagon. He’s a mature man, educated by years in the fight game and set in his ways. He also knows that at this point in life, what’s right for some of his peers may not be right for him. And that’s okay, he says, because “You can never please everybody.”