Costas Philippou: Back on His Feet

"Yeah, submissions are exciting, but I think the knockouts bring the fans in." - Costas Philippou 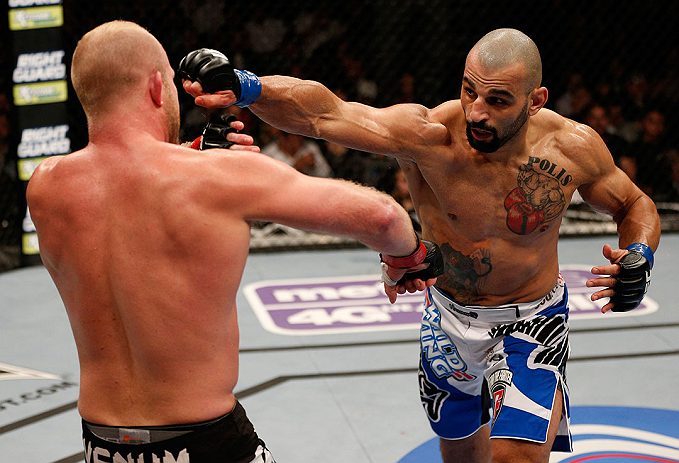 If Costas Philippou’s fighting style didn’t make him intriguing enough, consider that he may be one of the rare individuals who could be described as both an optimist and a realist. For example, take a look at his assessment of 2013, a year in which he only fought once, and that one time was a decision loss to Francis Carmont that snapped his five fight winning streak.

“Fighting wise, it sucked, but in general, it was a good year,” said Philippou. “I bought a new house, I moved to Long Island, I moved to a different gym, and I’m very happy with my life, but my fighting life wasn’t as good as 2012.”

That’s Philippou. He’s not one to dwell on the negative, even when it’s right in front of him. He does know it’s there though, and he’s not shy about addressing the loss to Carmont, which wasn’t exactly Fight of the Night material, as he was sent to the canvas and kept there for three rounds by the Montrealer. It was one of those nights that could make you question whether all the hard work is worth it.

“It’s not a question if I want to keep going or not, it’s just a question of whether my opponent wants to put up a fight for the fans or just lay on top of me,” said Philippou, whose only previous loss in the UFC was a 2011 decision defeat to Nick Catone. “I was actually very excited for that fight and I showed up in pretty good shape. Now he did the right thing as far as coming in with a good game plan and winning the fight. He took advantage of my weak spot I guess, and he won the fight, but I was going into that fight thinking that finally I got a striker, we’re going to exchange, we’re going to put on a good show for everybody, and people are going to be talking about this fight. I don’t know if anything was wrong or if it was just a bad night, but the guy did the right thing and he was able to control me. So as far as winning, great, but as a fight, I was watching it and I was getting bored, and I was the one fighting. Imagine the fans who paid the money to come and watch a fight. And they’re blaming both of us, and rightfully so. I couldn’t get him off of me, that’s my fault, and he wasn’t willing to stand up and trade. We’re both to blame for that.”

But Philippou isn’t the only optimist in this story, as it could be pointed out that it was a compliment to his striking skills that Carmont opted for a ground fight for three rounds, right?

“On one hand it’s a compliment because he didn’t want anything to do with my striking, but on the other hand, I lost the fight, so it sucks either way,” he laughs. “But you win some, you lose some. I got out of the fight, I was healthy, and the next day I was at the gym.”

And less than four months later, he’s preparing to go back into the Octagon with a Wednesday main event against Luke Rockhold that is a glowing endorsement not just for the Cyprus native’s continuing appeal, but a testament to the expectation that he and the former Strikeforce middleweight champion will put on a show for the fans.

“I was very excited,” said Philippou of his reaction to being offered the fight with Rockhold. “They’re putting trust in me by letting me headline a show, and all I want to do is just put on an exciting fight. I want to get Fight of the Night. That’s the first goal. If it’s a great fight and we both fight our asses off and I end up losing, and it is Fight of the Night and something that people will remember, I won’t say it wouldn’t hurt, but it won’t bother me. I will come back home and I’ll be happy. But if I win a fight and it’s boring like my last one, I’ll be a little upset with myself. I want to go in and please the fans and show that it wasn’t me. I want to fight.”

He’ll get a fight with Rockhold, who also wants to erase the memory of a recent loss; in his case a May knockout loss to Vitor Belfort that ruined his UFC debut. As for Philippou’s thoughts on his opponent, they’re all positive.

“He’s the next generation,” said the 34-year-old. “The guy grew up in an MMA gym, he doesn’t have any weak spots, he’s well-rounded, and he’s an MMA fighter. He’s not like me; I came from a boxing background and I’m trying to adapt. He’s the 2.0. Having said that, I want to go in and try to take his head off.”

And what you see is what you get with Philippou, though make no mistake about it, while he humbly downplays his evolution as a mixed martial artist, he can handle himself on the ground if necessary, and no one wins five straight in the UFC being one-dimensional.

“Nobody can say I was lucky,” he agrees. “You get lucky once or twice, not five times in a row. I am pretty comfortable with my wrestling ability, with my takedown defense and me actually taking opponents down, though I’d rather stay on my feet and put on a better show, and I am more comfortable on the feet. It’s something I’ve been doing my whole life, striking with my fists. Everybody knows what I’m trying to do. I want to stand and exchange and strike. If they want to do that, that would be great. If not, and they want to wrestle or do jiu-jitsu, I’ll be more than happy to go where the fight goes.”

Indeed, but as far as Philippou is concerned, striking’s better, and he expects to make his case this Wednesday.

“People, even little kids, they understand punches and kicks,” he smiles. “Not very many people understand the groundfighting, and people want to see punches, kicks, and knockouts. Yeah, submissions are exciting, but I think the knockouts bring the fans in.”