“I’m gonna walk out, have a damn good walkout with a great song, it’s gonna be a party, then we’re gonna fight, and then there’s a party afterwards and that’s all there is to it.”
By Thomas Gerbasi • Apr. 12, 2019

Every fighter is excited about their UFC debut. Few are as excited as Randy Costa is.

“Some people look at it as just a fight,” he explains. “They’re going in there like they’re preparing for war. Yes, you are getting into a fight, but you’ve got to remember why you got into this. I got into this because I love the sport, I love competing, and I love testing myself against other guys. I love the contact, I love the excitement, I love the nerves, I love the fear, I love the whole rollercoaster, I love the whole thing. And to be all aggressive and pissed off about a fight is ridiculous. I’m looking forward to going out there and putting on a show in front of everyone that’s watching. I want to be a performer, I want to entertain, and I want people to know who I am.”

They will know who the 24-year-old is soon enough. Making his first walk to the Octagon on Saturday night to face Brandon Davis in Atlanta, Costa is 4-0 heading into his first UFC bout, with each of those wins coming by first-round knockout. His total fight time? Two minutes and 50 seconds. Add in the fact that he’s honing his game under the tutelage of Joe Lauzon, and the Taunton, Massachusetts native is garnering quite a buzz.

But just four fights? Could Costa possibly be ready for this jump to the big show?

“Absolutely,” he says without hesitation. “Look who’s headlining the card. It’s Max Holloway, fighting for his second belt. Max Holloway was 4-0 when he got into the UFC against (Dustin) Poirier. Obviously, the UFC thinks very highly of me if they’re giving me a shot and putting me in the same category as those kinds of guys. I haven’t reached what they’ve reached, but I’m starting exactly where they started. (Chris) Weidman, Kron Gracie, I’m in the mix of guys that started at 4-0. That’s very humbling and I’m very grateful for the opportunity and I’m not gonna make them regret that. I’m gonna go out there and put on a show.”

Costa is confident, he likes to talk, and his enthusiasm is infectious. But that doesn’t mean he needs to put down his opponent to build himself up. It’s not his style and not the way he views any of this. Yeah, he’s fighting Davis on Saturday, but it’s not a reason to hate him.

“That’s stupid,” said Costa. “We’re in it for the same reason. It’s just a couple guys having some fun. I don’t hate him, I don’t even know him. Both of us train hard and you gotta respect what he’s about. I’m sure he respects what I’m about, and on April 13, as soon as the door closes, whether we hate each other or love each other, we’re gonna fight. I’m gonna shake his hand before, I’m gonna shake his hand after, and in the meantime we’ll fight.” 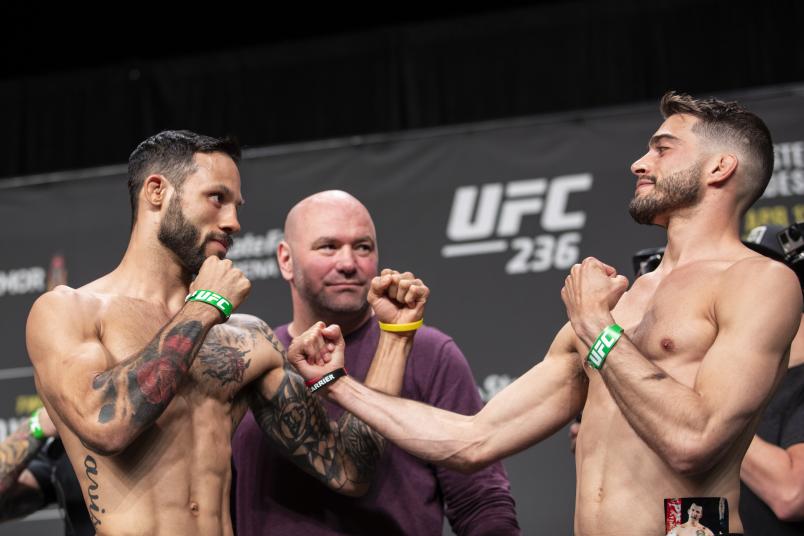 Maybe he’s not as boisterous as Costa, but that sounds a lot like Lauzon, the veteran lightweight star who made his reputation as an intense competitor in the Octagon and a class act outside it. Costa agrees when asked if some of that approach has rubbed off on him.

“Maybe subconsciously some of it does, because look at how he views the game,” said Costa. “He’s a veteran of the sport, he’s been a great role model for me both in the gym and out of the gym and in life in general. He’s a great guy and he never has any animosity towards his opponents and he never talks s**t. It’s also my upbringing. I’ve never been in any streetfights and I’ve never hit anybody outside of a controlled environment. So I think the combination of both those things have come together.”

Add that combination to knockout power and the insistence that when he’s on the bill, he’s there’s to fight, and yeah, we may be talking about Randy Costa for a long time. He likes the sound of that, and he promises not to disappoint.

“I’m gonna walk out, have a damn good walkout with a great song, it’s gonna be a party, then we’re gonna fight, and then there’s a party afterwards and that’s all there is to it.”