"I showed that not only do I belong, but I can also compete and I can beat some of the top guys in the world. So I took a lot of positive things away from it and I learned a lot about myself.”
By Thomas Gerbasi, on Twitter: @TGerbasi • Oct. 14, 2019

When you’ve ended all four of your professional fights by knockout in less than three minutes combined, certain things are usually expected for fight number five.

It didn’t go that way for Taunton bantamweight Randy Costa, but if you ask about the second-round submission loss he suffered in his UFC debut at the hands of Brandon Davis in April, “suffered” may be the wrong term to use, because the affable and energetic 25-year-old has already moved on.

“Obviously, I didn’t get the win, and that sucks, but I think there were a lot more positives than there were negatives taken from that fight,” said Costa, who returns to the Octagon this Friday to face Boston Salmon. “My cage experience quadrupled in that one fight. I was a unicorn going in. Nobody knew anything about me, only that I was this flashy kid knocking people out right away. No one knew that I had an actual style or how I would react. And I think I showed that not only do I belong, but I can also compete and I can beat some of the top guys in the world. So I took a lot of positive things away from it and I learned a lot about myself.” 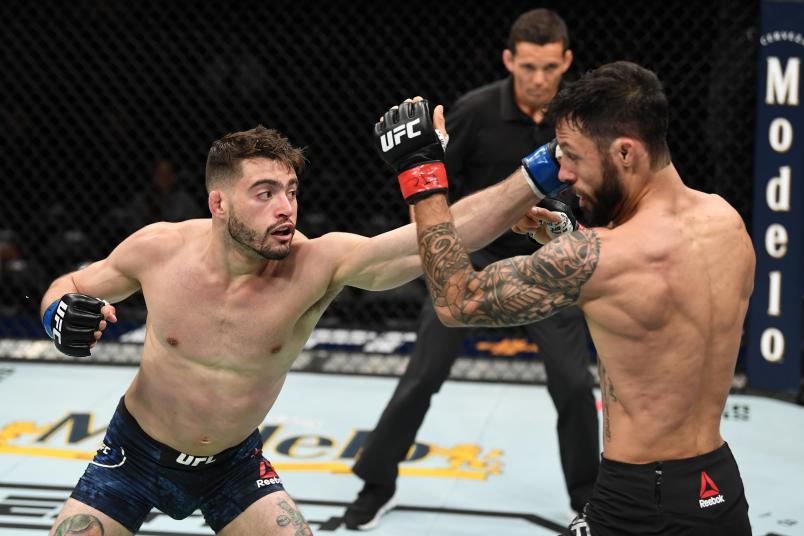 Despite the loss, Costa showed promise before the end, keeping him on the must-see list heading into this week’s bout. And maybe even more impressive, the New Englander didn’t look at the defeat as the end of the world. Because it’s not.

“It’s a sporting event,” he laughs. “Losing sucks, but give yourself 12 hours, 24 hours to feel bad for yourself, then pick your head up and let’s move. There are a lot worse places to be in this world. I’m not in the middle of a war right now. I have a great family, great support system, great friends and I get to work out every single day and then I get to get into a fistfight and get paid for it. What is there to be upset about? I get another chance. All I had to do was go out there and show people who I am. I have food on my table, clean water to drink, life is good.”

It is, and this week he gets to face another fighter coming off a loss in his UFC debut in Salmon. The two actually became friendly while in Atlanta, and though this is obviously business when the Octagon gate shuts, Costa sees this fight as any other – 15 minutes or less of hell and bad intentions, and respect before and after.

Costa’s fighting style is enough to make him a fan favorite; this attitude towards his opposition makes it even easier to want to see him succeed, and those who dropped him a line after the Davis bout seem to agree.

“I got nothing but positive messages since April 13th about how excited people are to see me fight going forward and I think I bring a very, very exciting and unorthodox style that’s extremely fan friendly,” he said. “I’m throwing crazy stuff, I’m moving like a bozo and nothing really makes sense, but it works.”

And yeah, this is a sporting event, but he doesn’t forget that it’s a fight too, something he found out about against Davis.

“My pro and amateur career combined up to that, I had never even been punched, ever,” Costa laughs. “I got punched that fight and that was fun. I used to call those people who liked getting hit lunatics; now I feel like I’m one of them and I can’t wait to get back in there and dance. It’s gonna be awesome.”

Yeah, Costa’s cut from a different cloth from most, which should mean his hometown fans should be out in force to watch him do this thing in TD Garden.

“I’ve been in the UFC for six months and my last fight at home was just in January, so it hasn’t been that long and this feeling isn’t that weird, but to be able to say I’m fighting at TD Garden is bananas,” he said. “I was selling out the local shows, I brought 80 to 100 people down to Atlanta with me, so this place, it’s gonna be rocking. This is where the Bruins play. I get to fight there? People are gonna be sitting in the 300 section to watch this random Costa kid fight? It’s gonna be insane.”