Costa Philippou's Many Twists of Fate

"He’s mostly a striker, so I’ll be more comfortable to strike with him,
and it’s the main card, so it’s a win-win situation for me.” - Costa Philippou 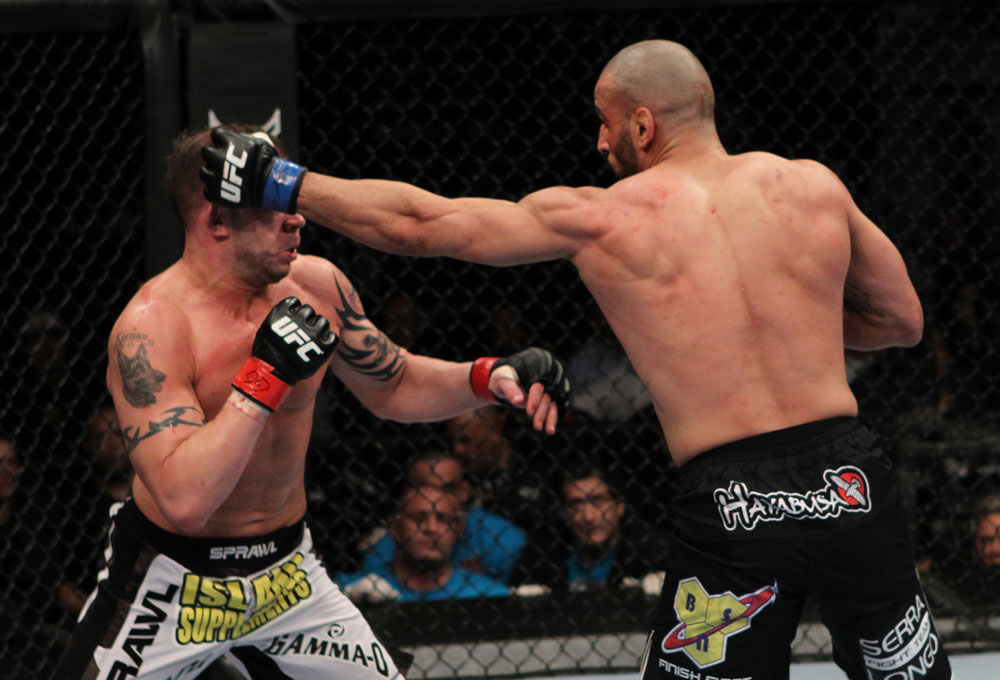 When in Rome, do as the Romans do. Or, in deference to Cyprus native Costa Philippou’s heritage, when in Greece, do as the Greeks do. So when the former boxer answered the bell for his first mixed martial arts match against future UFC fighter Ricardo Romero in May of 2008, he didn’t want to be rude or act like a rookie.

He threw a leg kick. It didn’t go so well.

“The guy picked me up and threw me on my head,” he laughs. “I got up and started punching and I don’t think I threw another kick the rest of the fight.”

That was a good thing, as he dropped Romero twice in the bout, only to lose a split decision. It wasn’t a bad showing for someone who just a few months earlier was ready to start going after Wladimir Klitschko, not Anderson Silva.

“After that I showed that I was actually a fighter, and they paid attention to me,” he said. “They started training me as an MMA fighter. But I went into that fight not even knowing what an armbar was or what takedown defense was.”

A native of Limassol, Philippou’s love was always boxing, and he was good at it, winning a Bronze medal in the European championships and just missing a spot on the Olympic team. Eventually, he moved to the United States to chase glory in the squared circle, and was encouraged to enter the prestigious New York Golden Gloves tournament in 1996, just two months after arriving in the States.

Philippou made it to the finals at Madison Square Garden in the super heavyweight division, losing a decision to Nagy Aguilera, who went on to a decent pro career that included fights with Antonio Tarver, Chris Arreola, and Samuel Peter.

Following the tournament, Philippou turned pro, decisioning Butterbean conqueror Mitchell Rose over four rounds, and following it up with a 53 second knockout of James Toto. But it was in his third fight, an ESPN-televised bout in February of 2007 that things got interesting.

“I fought a last minute opponent, on two days notice, and the guy was 6-5 with five, six inches longer reach than me,” said Philippou of his bout with Rodney Ray. “It wasn’t a great fight, but I won a unanimous decision, and instead of my coach getting back to the gym, seeing whatever we did wrong and fixing it, he was complaining about me not knocking out the guy.”

The two developed some irreconcilable differences at this point, and that normally wouldn’t have been the end of the world. But in this case, Philippou’s coach was also his manager, and he had two years left on a three year contract with him.

“I couldn’t box without giving him his percentage, and I didn’t want to do that, so I decided to try MMA, thinking a fight is a fight,” said Philippou. “I had no idea how to wrestle or do jiu-jitsu. I knew how to kickbox, but that was about it.”

Well, he at least had the boxing part, since that kicking thing obviously didn’t work out that well against Romero. But when he accepted the fight just four months after he decided he was going to become a mixed martial artist, he earned a measure of respect.

“I wanted to show them that I was willing to fight,” he said. “They didn’t know me. They thought that I was just all talk.”

He wasn’t, and in addition to his striking prowess, he had a willingness to work and to learn.

“I liked training jiu-jitsu,” he said. “I hated training with the gi because of the heat. So I used the gi for a year and then put it away. Wrestling was even harder than jiu-jitsu because in jiu-jitsu you’ve got time to think and come up with a couple of moves. In wrestling, you’ve got to react, just like in boxing, and a lot of things are different.”

That goes for transitioning his boxing into MMA striking as well.

“You can’t use the same technique that you use in a boxing fight,” said Philippou. “You won’t be able to stay up close and bob and weave and exchange five, six punch combinations because they’ll take you down. It took me a while to get used to that because my whole boxing career, they were telling me to throw a minimum of four, five punches and stay in the pocket because I’m a short guy. They wanted me to fight kind of like (Mike) Tyson. With MMA that doesn’t work. You’ve got to be light on your feet and you gotta move. A great example is James Toney. He’s a great boxer, but he’ll never be a great MMA fighter. He’s flat on his feet, he’s moving and bobbing and weaving and two seconds later he’s going to be on his back and boxing is over.”

As time went on though, he began picking up the game and picking up wins. In 2010, he made it to the elimination round on the 11th season of The Ultimate Fighter, but was ousted by Joe Henle after a strong start to their bout, yet he got right back to business, eventually compiling a 7-1, 1 NC record when he got the call from the UFC to step in on a week’s notice to face Nick Catone at UFC 128 in March. Little had changed in his mindset from the first time he began in the sport, so he accepted the fight, even though he had just taken the previous three weeks off after his three round win over Uriah Hall in February.

The result was predictable, with Catone taking Philippou down to the mat and keeping him there en route to a clear-cut three round decision win.

“I proved I could take a beating, that’s about it,” chuckled Philippou, who wouldn’t mind a shot at redemption someday. “Hopefully in the future I get another match with Catone. I would like to fight him again just to prove a point that I’m not such an easy opponent. He had his way with me and walked right through me. Hopefully in this fight I get to prove that I’m a different fighter than what everybody saw.”

“This fight” is a UFC 133 main card battle with Jorge Rivera. Technically, it’s another late notice match considering that Philippou was originally scheduled to face Rafael Natal on the Philadelphia card, but when Alessio Sakara was forced out of the Rivera bout due to injury, what better replacement would there be for the former pro boxer than another pro boxer? Philippou agrees.

“Nothing really changed,” he said. “They switched the opponent and I gladly accepted the challenge when they asked me, but it was actually good news for me to get a new opponent. He’s mostly a striker, so I’ll be more comfortable to strike with him, and it’s the main card, so it’s a win-win situation for me.”

He also comes into the bout having been a key training partner for members of his camp, including UFC vet Pete Sell and Strikeforce prospect Gian Villante, and since he’s not facing Natal, a member of the Renzo Gracie camp, he will have Matt Serra joining Ray Longo in his corner. That sounds like a win-win-win-win. But then there’s Rivera, a hard-nosed veteran with knockout power and the experience to gut through a tough fight. Philippou is looking forward to the challenge of facing “El Conquistador,” but he believes he has the edge he needs to secure his first UFC win.